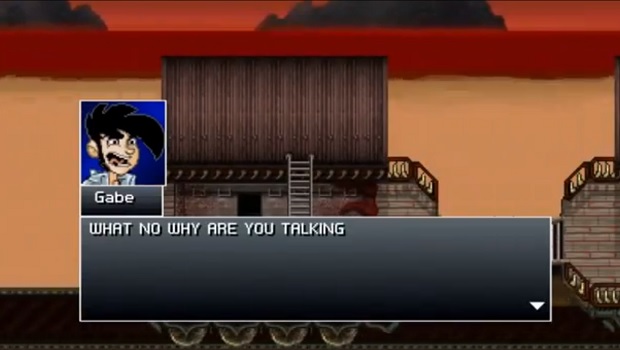 Just like Episode 3 which also ended with a bang

Considering that Penny Arcade: On The Rain Slick Precipice of Darkness looked like it would never continue on from the first two episodes, it’s with an air of melancholy that the franchise will come to an end with Episode 4. Zeboyd Games has done a great job on renewing the franchise with a whole new 16-bit, classic JRPG style while retaining the same humor as the previous games.

Episode 4 starts with Gabe and the series main villain, Dr. Blood, landing in the Underhell after the destruction of the world at the end of Episode 3. Forced into an unlikely partnership, Gabe and Blood must embark on a journey through the Underhell to try and save what little they have.

Co-founder of Zeboyd, Bill Stiernberg, says the franchise is going out on a high-note: “It’s almost like a double bang because the third game ended with a literal destruction of the universe so I think with game four the finale of the series is gonna be pretty awesome.”

Despite the finality of Episode 4, there’s still some new gameplay features to freshen up the experience. Characters will now be able to obtain monsters that will be used in combat instead of directly participating themselves.

Zeboyd’s other co-founder Robert Boyd explains more: “In this game you’re going to get a number of different, weird monsters on your team that you’ll be using to fight and they level up and gain new abilities as you go. You can also hook up one the human trainers to each monster and depending on which monster you use, you’ll get different stat bonuses when you level up and you’ll also get access to that trainer’s set of abilities.”

One thing that hasn’t changed is the Penny Arcade guys’ commitment to the humor; there’s plenty of little jokes throughout the game especially with the monster names and descriptions. A flame-breathing flying bug called a Mesquito and a familiar spherical avian foe called a “Raging Fowl” were two highlights I saw early in the game.

“Yeah, Jerry has come up with the overarching plot and characters but he seems to revel in the details, the world building and the flavor text,” Bill continues, “and people love that. People will come out of our demo taking about some obscure line from clicking on an enemy or a towns person and it’s great having him do that. The story itself is a very collaborative project and so I think we’ve got the best of his creative stuff and ours as well in building this game.”

Although Episode 4 is aiming for a spring release, the team is shooting for a May 2013 launch. This maybe the final episode of On A Rain Slick Precipice of Darkness but it will go out with a bang and not a whimper.