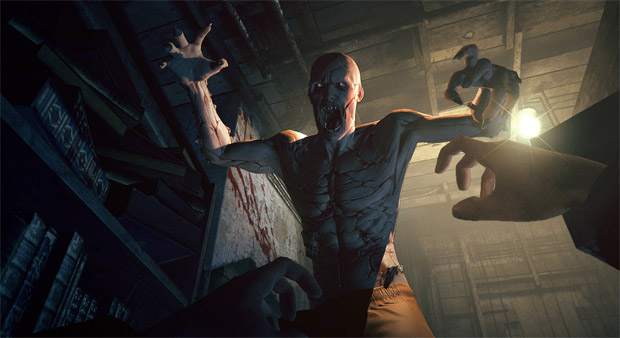 Demoing a survival horror game or even any game that relies on sound and atmosphere is really hard at a convention. The bright lights and the noise make immersing yourself a struggle, so the guys at Red Barrel were grinning with delight when they heard screams and profanities coming from their sheltered booth. This group of ex-Ubisoft devs invested in two booths with thick black curtains so you were alone with the game; put the headphones on in the dark and it’s just like being at home at 2:00am playing a game that’s going to give you a sleepless night.

With survival horror it’s all about the execution, and whilst Outlast‘s premise of possible corporate experiments gone wrong in a former asylum feels familiar, the execution is what matters. At one point I jumped backwards so suddenly I almost flung the mouse off the desk. (If you play the game, wait until the library — you’ll see what I mean). Co-founder Philip Morin explained that Amnesia: The Dark Descent was a particular inspiration for Outlast in its non-combat approach to gameplay.

“Amnesia was a big influence, we all enjoyed that game a lot so when it came time to find a direction to take for a horror game, the no combat decision they made in Amnesia — we decided to keep that but also add more traversal and puzzles.” Considering the team at Red Barrel have cut their teeth on franchises like Uncharted, Assassin’s Creed and Prince of Persia, it’s no surprise that traversal is as much a part of Outlast as well as the moody scares.

Earlier on in the demo, your character Miles Upshur has to climb a scaffold to gain entrance into the Mount Massive Asylum. Whilst in the building itself, you’ll have to squeeze through narrow gaps and up into vents and this movement feels quite smooth and natural. You’ll have to make a sharp exit as the monsters stalking you are things you can’t fight off — you just have to run.

“We figured with our background in action/adventure games, we should be able to bring some interesting things to the genre,” Phillip continues. “It’s still a horror game but there’s action/adventure in it elements in it.”

From just hanging around the Outlast booth, it was clear the game was demoing well as one guy before me screamed more than once. “It’s great, it’s very rewarding, players are scared some even smash the booth… to us [with] a small team with a very low budget it costs a lot of money to come here but no regrets at all.”