We were one of the very few that got hands-on time with Nvidia’s Project Shield gaming system at CES earlier this year, but now they have the portable device on full display here at PAX East for attendees and press to try out.

If you haven’t heard of it yet, Project Shield makes PC gaming portable. GeForce 600-series cards can stream PC games directly to the handheld device, where they’ll show up on the sharp 720p touchscreen. They can be controlled by the system’s Xbox 360-style controls. Shield also doubles and an Android OS gaming device. 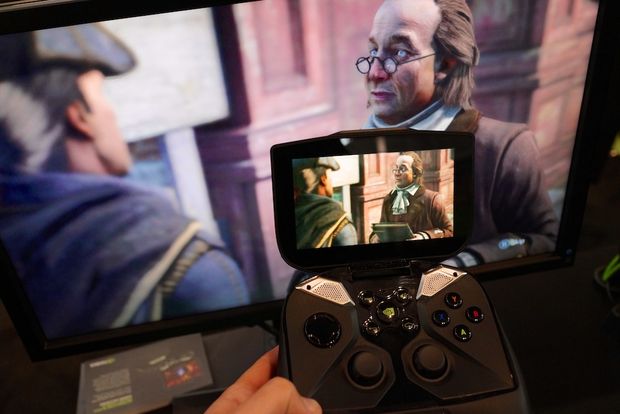 During my meeting with Nvidia, I played Assassin’s Creed III and Need for Speed: Most Wanted on the Shield, impressed by how it just about perfectly matched the screen of the PC supplying the stream. No hiccups — perfect. The screen is smaller, and it is running at a lower resolution, but it doesn’t seem to miss a beat in comparison, looking pretty much exactly as it does on a PC monitor. Just smaller is all.

Nivida told us more about how it works. The GeForce Experience software will dig around your computer (Steam and other providers) to find supported games. Those will show up on the Sheild’s menu, meaning that streaming over local network is open for these titles. Once started, the chipset takes an H.264 stream from the PC to the Shield, which means that not a lot of computing is going on, leaving plenty of room to keep control latency down.

The four rigs they had set up showed that this all works beautifully. Aside from the games I tried, Borderlands 2 and Skyrim were also running smoothly at the booth. 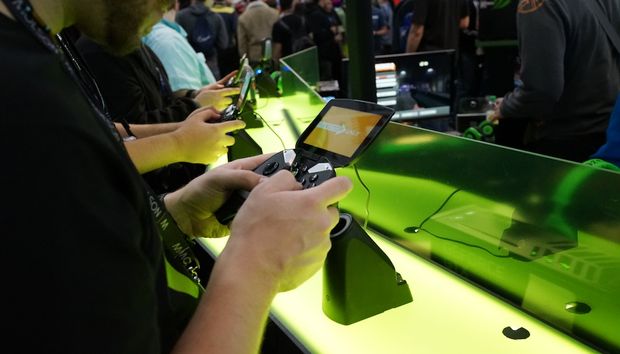 Another benefit of just video and control signals being sent is that battery life is good — Nvidia says we can expect about 10 hours for streaming gameplay. Given that actual computing is going on for installed Android games, battery life can be less than 10 hours, Nvidia warned.

Shield is also an Android gaming solution with its Tegra 4 chipset and its Android 4.2 OS. I tried out several existing Android games that were preloaded, and they all worked fine with the mapped button controls, and looked great on the Shield screen. I tried everything from Sonic the Hedgehog 4 to High Voltage’s The Conduit and had no issues.

The unit isn’t final, but Nvidia tells me it’s “pretty close” when it comes to its layout, ports, and display. The upper rear of the unit has a SD card slot, an audio jack, a power port, and an HDMI port. They say that the Shield can output 4K video through the latter port– crazy! 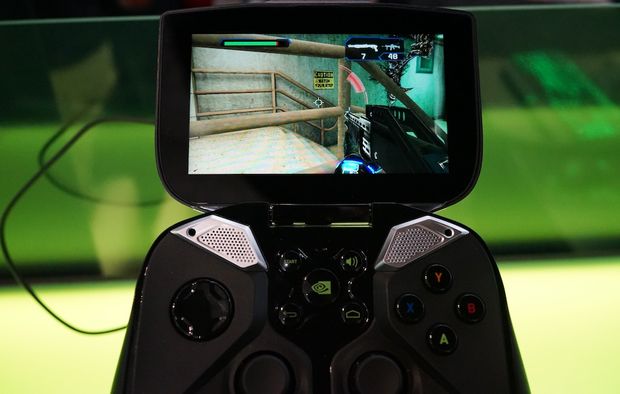 I’m sure it was encouraging for Nvidia to see the nearly constant stream of curious gamers trying out the Shield these past two days of PAX East. Most seemed impressed by the device and its streaming capabilities here. It’ll be interesting to see how things develop for this device.

Look for more on Project Shield leading up to its launch later this year.