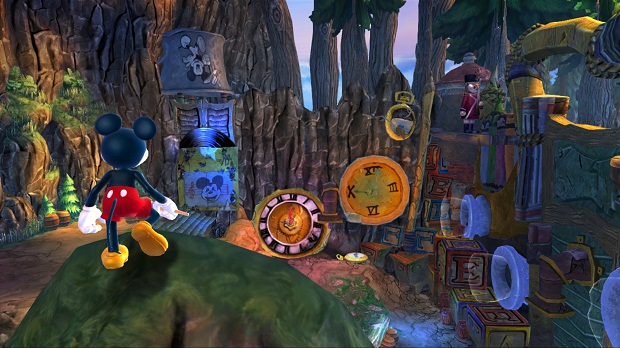 While here at PAX, I had a chance to sit down with a new section of upcoming platformer Epic Mickey 2. These just released screens show off the new section of the game that I got to play. Based on Frontier Land in Disneyland, Fort Wasteland is a dusty old fort in the middle of a western-themed world that houses a load of intimidating enemies and tricky platforming challenges.

As a huge Disney fan, I am still not entirely sold on Epic Mickey 2. On the one hand, a Disney-themed platformer starring Mickey Mouse is kind of all I need in life (eff food and water!). But, on the other hand, the gameplay does not feel as polished as similar 3D platformers Banjo-Kazooie or any of the Mario games. But it could be argued those games were not nearly as ambitious as this admittedly beautiful and nostalgic game.

This new area of the game looked great, though, and had some fun gameplay sections to play through. I am, of course, going to play Epic Mickey 2 when it is released on November 18, but still have some mild reservations on how the final game will come together.

And for the record, my favorite thing in the real-life Frontier Land is the goat with dynamite in its mouth that irresponsibly hangs out near the second chain lift on Big Thunder Mountain Railroad. I did not see the goat in the game. Come on, Warren Spector! IT IS A GOAT WITH DYNAMITE IN ITS MOUTH! That’s a boss right there if I ever saw one.

You can check out all the new screens in the gallery. What do you think?