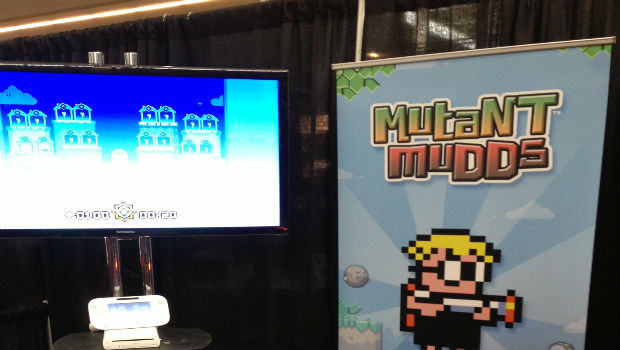 Mutant Mudds Deluxe, now coming to the Wii U eShop in the second quarter of 2013, is looking great so far, based on my hands-on time with it earlier today at PAX East. The game is setup to run on both the TV and the Wii U GamePad, and for all intents and purposes, plays just like the original.

Renegade Kid’s Jools Watsham was readily available, and took the time to spend a bit explaining a bit of his design philosophy on the game, and the theme of the franchise in general. He noted that the GamePad gives you “roughly a bit more than the 3DS” in terms of screen real estate, but if you want, you can look up at the TV for a much more full view of the action.

Although the GamePad was zoomed in a little too much for my tastes, Jools stated that he wanted the game to be “pixel perfect,” and didn’t want to compromise the graphics in any way, which I respect.

There will be 20 new Ghost levels in this version of the game, in addition to the previous Granny levels from the PC version. Watsham noted how the ghost levels would be more seamlessly integrated in the experience from the beginning, allowing players to immediately jump into the ghost world if they wish.

These new stages will feature spectres that are otherwise impervious outside of being hit with the “ghost shot,” a new limited ammo gun found only in Deluxe, and only in these new levels. The ghost shots are pretty few and far between, so these stages will test your skills, as you’ll have to dodge a ton of invulnerable enemies — plus, if you kill them with the ghost shot, they’ll reform and come back within a few seconds anyways!

When I asked him about possibly unlocking the Granny stages earlier as well, he said that he thought about it, but wanted “something special” for players to unlock after completing the game, so he kept that mechanic in.

He noted the reflection on the mirror that you use to traverse into the world of the ghosts, and how he was going for little details like that, citing “oldschool Capcom games” as a reference point. From what I can tell, he’s really going all-out to make sure that this upholds that classic  platformer feel of old, which is what I really liked about the original Mutant Mudds.

Jools was really passionate about the game, and it shows right on the screen. I have high hopes for the Wii U version of Mudds, and I hope it brings the franchise to a larger audience.