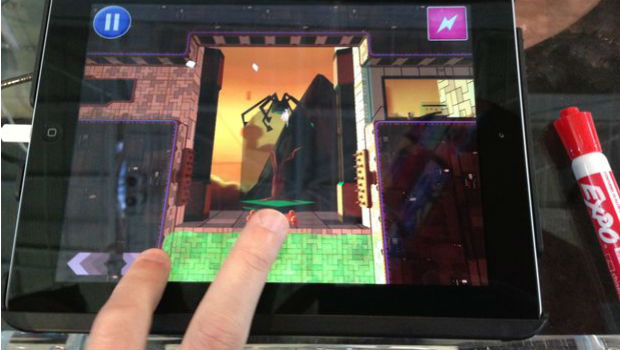 It works surprisingly well too, for a precision platformer

Today I had a chance to meet up with Twisted Pixel developer Mike Wilford, and talk a bit about the new iOS port of Ms. Splosion Man, including some hands-on time with the game.

Mike started by stating that on current iPads, the port will run at a solid 60fps, which I was able to see first-hand (the iPhone 5 version will run a little slower, on par with 45-50 fps, I was told). All things considered, this version looks better than the XBLA original, which ran at a slower rate.

You’ll be able to control the action through two virtual direction buttons — left and right, as well as ‘sploding (ie jumping) by tapping anywhere on the right hand side of the screen. Since the game is part rhythm oriented anyways, tapping in time with some of the trickier jumps felt pretty natural, and extremely fun on a touch screen.

I have to admit, it took me a few minutes to get my bearings together and play this rather taxing game on a touch screen, but after I was done learning the ropes, it felt great.

As is the case with most games these days, Mike informed me that the game would feature a microtransaction based system for people who wanted to use it. But he also stressed that every upgrade you buy can be purchased with in-game coins — which you can earn pretty readily just by playing through the game — and that you don’t need upgrades to beat it.

If you haven’t had a chance to play this gem of a franchise yet, iOS could be a great place to start, especially if you have an iPad. It’s a wonderful puzzle platformer, and the transition to Apple’s platform has gone pretty smoothly based on what I’ve seen! It’ll launch very soon.