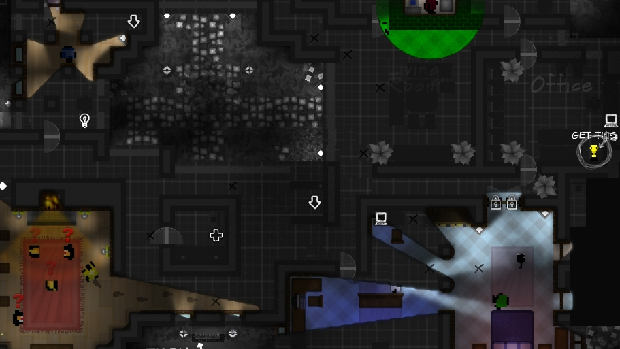 I walked onto the PAX expo floor with a few goals in mind. The first thing on that list was to play Monaco: What’s Yours is Mine immediately. I’ve been following the game for what feels like a lifetime now and it seemed to be a dream to finally have a chance to get my hands on it. For the uninitiated, Monaco is a cooperative, top-down heist game that actually delivers. The experience that you get from you and your partner(s) being in the zone is largely unmatched by any other game.

The type of experience you can expect will be directly linked to the type and quantity of people playing. Playing by yourself or with one friend results in very precarious, stealthy, and coordinated actions. However, playing with four people on a show floor often results in chaos, silly fun, and many, MANY security lasers being tripped.

I got to play the game with a group of four as well as with just one partner and the results were like night and day. Andy Schatz, the mastermind behind the game, described the four-player mode as more of a “party mode.” I thought this was definitely true on the show floor, but I’m confident that getting four people who know what’s going on could easily create a wonderfully orchestrated heist.

First of all, I have to mention just how gorgeous the game looks. Screenshots do not do it justice. Seeing this game in motion, with all of the vibrant colors being revealed as you navigate the map is truly a sight to behold. The level is laid out as a blueprint, with areas grayed out unless they’re in your sight. The result is that you’ll never quite know what’s around the corner until you take a peek, which often creates a sense of tension in your movements. The music, while at times was hard to hear, is equally great. Old timey piano plays as you do your dirty work and, once spotted, the tempo and volume ramps up, adding tension.

Monaco is a class-based game, though the number of classes is still yet to be seen. There were at least six at the PAX demo that I got to see. When picking your class, each character’s specialty is clearly laid out in his or her description. The Lookout, for example, can detect where the security guards are patrolling around the map when he’s sneaking. My favorite class, The Mole, can break through walls and create a new pathway, though this makes a lot of noise. Therefore, a Lookout can show The Mole where the guards are so he can identify the ideal spot to break down walls and not be instantly detected. Other classes, such as The Hacker, Pickpocket, and Lockpick, have much more straightforward roles.

One of the more interesting classes, which I unfortunately didn’t get to see in action, is The Redhead. According to Andy, she’s able to distract one of the guards with her “come hither” good looks. This way, if one of your teammates is being chased, the guard will turn around, fall in love, and chase her down as soon as she walks nearby. Then it’s up to her to lure him away just enough before she loses him. She can only have one suitor at a time, though, and any other guards after the first will attack her out of sheer jealousy.

It’s up to you and anyone you may be playing with to use these abilities as best as you can to complete the objective. Our objective at the PAX demo was to steal a trophy from the top floor of an embassy and get the heck out of there. There were gold coins scattered around the floors that we could pick up on our way, but collecting all of them was not required. The game lets you know when you’ve gotten all the loot from a single floor, which is highly appreciated since it is not obvious whether you’ve done so otherwise. Once you’ve got the item, you still have to make it to your escape vehicle, just as you’d expect from a good heist game. 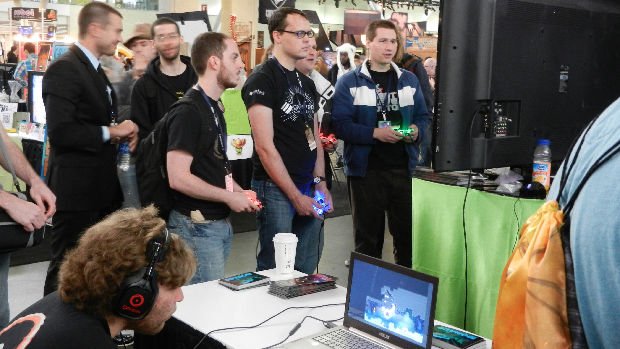 Playing with four people was mostly chaos. Fun chaos, but chaos nonetheless. It should be noted that it was our first time playing the game, so we were still in the process of getting our bearings. However, as previously mentioned, I think that once we actually get our hands on the game and understand it more, nothing will beat a perfect four-person heist. For now though, it was indeed more of a party game. Part of that is thanks to the super-easy game mechanics. In order to open a locked door, hack a computer, or bust down a wall as The Mole, you simply need to hold the direction towards the object. While you do that, a circular progress meter begins to fill up. Once it’s full, the action is completed. Any player can hack a computer or open a locked door, but the classes that specialize in those things are able to complete them MUCH faster. During our romp, we were spotted by just about every guard, tripped every laser, and missed plenty of coins. I still enjoyed myself, but I felt as if we were missing out on some of the aspects that make Monaco so special.

I later played the mission with only one other person. This time, being sneaky was a priority. We devised plans, slowly moved around the map, created distractions (even without The Redhead), and picked up each and every coin. Once, after we were spotted, we both frantically ran around the nearest corner and dove into a bush to hide. The guard lost sight of us but was still way too close for comfort. I wasn’t sure whether he would inspect the bush or not and got incredibly nervous, but he soon walked away and we were free to sneak around him unseen.

The various ways to approach any given scenario in Monaco are what make this game so amazing. You need to analyze your situation with the class or classes you have with you and devise a strategy from there. Each time you play a level, you can clear it using completely different means. Personally, this was my favorite game at PAX and you owe it to yourself to put Monaco on your radar. It’s coming to PC/Mac at some point (never soon enough) and at least one console.

Oh, and it doesn’t hurt that Andy Schatz was unofficially the most handsome man on the show floor.