Just because Hi-Rez Studios is busy nearing the launch of its free-to-play FPS Tribes: Ascend doesn’t mean they don’t have another big title in the works. SMITE is the studio’s upcoming MOBA title (like Dota 2 or League of Legends) that adds a few twists to the formula. The biggest difference is easily the third-person perspective. While on the surface this might seem like a small change, the new camera angle throws on an extra few layers to the genre.

I can’t say I’m the biggest fan of MOBA titles. I casually played the Warcraft and StarCraft custom maps back in the day, and now I occasionally enjoy a round of Dota 2 with friends. After playing SMITE and talking to Todd Harris, COO of Hi-Rez Studios, I can definitely see myself alternating between Dota 2 and SMITE once it is available. 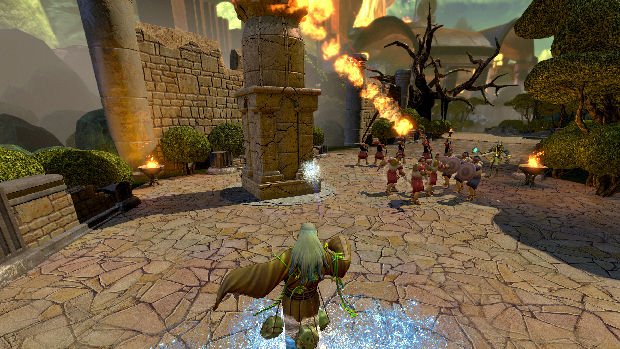 As someone who grew up on PC FPS games, I really appreciated the WASD movement controls of SMITE. As StarCraft II constantly reminds me, I’m not the best at click-to-move controls. I usually feel like I never have complete control over my hero since my clicking skills aren’t up to par. WASD is so natural to me that I felt as if I had that precision while playing SMITE.

The other huge element about the third-person perspective is your awareness. In Dota 2 you can see when an enemy is coming up behind you without even looking at the minimap and you can attack them by just clicking on them. In SMITE, you have to actually look behind you and then line up your shot in order to see and hit them. There were no targeted spells when I played SMITE, everything is basically a “skill shot.” Some spells will shoot out in front of you, as shown by an arrow on the ground, and some will attack a targeted circle on the ground. It makes the game different enough from the “get in range and spam attacks” methods of other MOBA titles and it felt pretty great to hit with some of those skills.

I’ll be honest: I’m pretty bad at MOBA games in general. I haven’t looked up any strategies or tactics online. I only know what “last hitting” is because one of my buddies told me. Every time I play Dota 2 I mainly stick to the “recommended items” because I feel overwhelmed. Needless to say, when I saw an “auto-purchase items” option I turned it on right away. This way, every time I went to the shop the game automatically bought what it thought was the best item for my specific character. Todd said that these were programmed by the developers to be a pretty successful item set. You could also have the game auto-level your skills, but I’m not that much of a noob. Todd even mentioned that they might offer auto-buying and leveling that was designed by professional players which sounds like a novel idea. 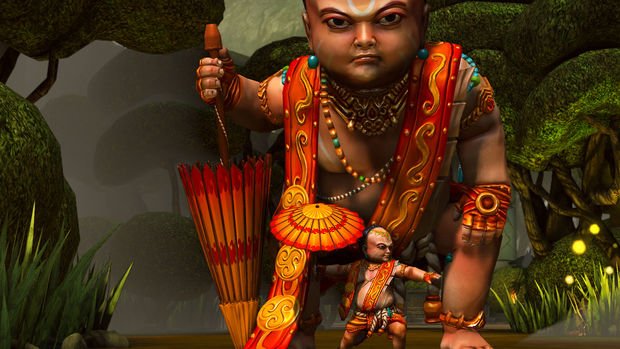 My favorite part of any MOBA title is the hero design. I love scrolling through the heroes in Dota 2 and marveling and the great variety of inspirations. SMITE is no different, pulling from various cultures and their mythology. There are five areas that the gods are pulled from: Norse, Chinese, Egyptian, Hindu, and Greek. Each set of gods has its own distinct look and each design is pretty interesting. The Hindu god Vamana (pictured above), for example, is a very small baby-esque character whose ultimate skill is to turn massive and start taking hits like a champ.

My least favorite thing about MOBA games is the community. Why is everyone so mean if you’re not an expert? I asked Todd if they have anything to try and foster a positive community and he mentioned that before jumping into real games the player has the option to play as much as they want in a practice mode. What it’ll entail is yet to be seen but I’m certainly glad it’s there.

SMITE will follow the League of Legends business model: free-to-play with more content to be added post-release. You can unlock any heroes via time played, but skins will cost you real money to unlock. The game is currently in its alpha stage with a closed beta beginning somewhat soonish. You can register for the beta now over at the official site.