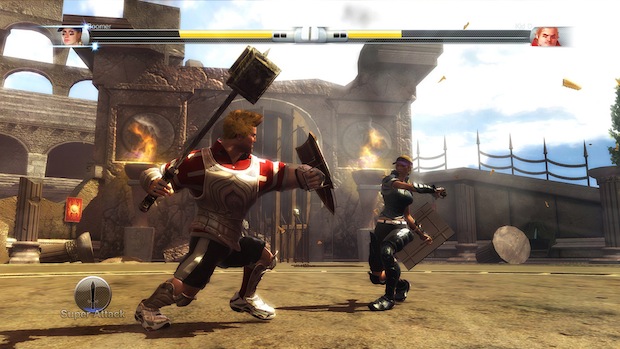 SCE didn’t drop a bombshell when it revealed that a first-party sports compilation package would hit shelves alongside its PlayStation Move hardware. The real surprise is that at least two of Sports Champions’ mini-games will offer more than the rest of the clutter. Thank the fidelity.

In Boston last afternoon I was able to go hands-on with “Gladiator Duels” and “Ping Pong,” two games being offered in the game-rich Sports Champions. Neither of the titles were flashy, but each prove that the combination Move’s depth-tracking and pinpoint precision can produce better, more enjoyable games — games that just feel better than what is offered in, say, Wii Sports Resort.

What Are These Things and What Do They Do?

“Gladiator Duels” is a 3rd-person fighter set in an arena. You’ll control a cartoony avatar equipped with a weapon and shield that can be used independently if you have multiple Move wands. The combat is straightforward — just drill the other weird-bodied dude. But the fights can be as complex as you want them to be. The robust wand tracking allows you to thrust, chop, and swing at any depth and angle. You can hack at knees, mouths, ankles and block at any level, which brings in a layer of strategy, and probably immersion, into the game. Most of these titles tend to do little more than irritate your wrist as they degrade into flimsy, gesture-based swing fests. This, however, feels refreshingly accurate and fun because of it.

“Ping-Pong” has the same thing going for it as well. If you’re standing in a proper stance, you’ll be able to rock the ball with as much spin and with as much touch as you would at a physical table. The only catch here is that serving is wicked awkward. Even though the wand might not smash your TV, the developer has chosen not to allow you to toss a second controller in the air as if it were a ball.

Sports Champions hits this fall and offers several titles: these two, of course, disc-golf, and archery. Considering how precise the hardware is, we’re more than excited to give archery a spin (and then compare it to Wii Sports Restort). Until then, though, we’ll just keep talking nice about these two offerings.