EA DICE proved that the Xbox LIVE and PSN audience is ready to purchase feature-rich downloadable games that are similar to retail experiences. Atomic Games is looking to expand on that idea, to “disrupt” the market by offering a downloadable that offers a full retail-like experience at a smaller price.

In Boston, I went hands-on with Atomic Games’ Breach. It’s a downloadable built on the tech the studio developed for the controversial and still unreleased (and still coming) Six Days in Fallujah. Atomic president Peter Tamte told me that Breach will offer “the innovation and quality expected in a retail game” over XBLA. And it looks like it might be doing just that. 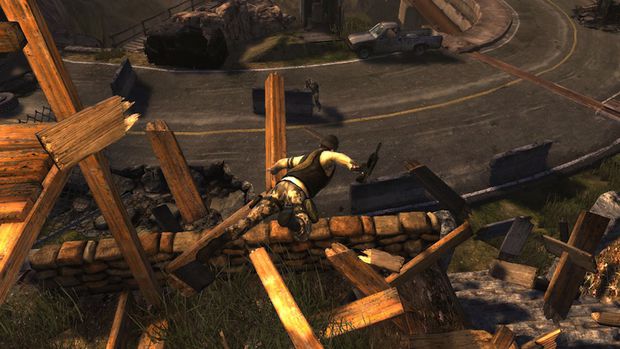 Breach is a multiplayer-only, 8-on-8 simulation FPS that features four modes, five standard character classes, and a persistent experience system.

It’s not as fast as a Counter-Strike, and it isn’t quite as slow as a simulation shooter like Ghost Recon. It sits in the middle because of its active cover system. Barriers and such can be snapped onto with a click of the right stick. A third-person camera then pans, allowing people full awareness of their surroundings and, of course, the ability to peek and blind fire.

Cover is not permanent, though. “Most” barriers and pieces in the environment are completely destructible via explosives of particularly large caliber guns. This is a neat change-of-pace, refreshing design point. Maps will always be changing as bridges topple, buildings are wrecked, and vantage points are obliterated by explosive damage. Particularly cool is how precise destruction can be. You’ll be able to destroy buildings and cover brick-by-brick, giving some interesting tactical choices in the prime real estate around levels.

In part, the real-life CIA SAD has influenced this destruction and cover design. And these elites have also managed to influence the persistent EXP systems. As players kill each other, they’ll earn experience that can be used to purchase gadgets that give a serious edge in combat. For example, one of the gadgets, called the “Sniper Detector,” shows the flash from scopes in the distance, giving you a heads-up about where snipers are. Tamte told me that this is a real thing that the SAD dudes use. 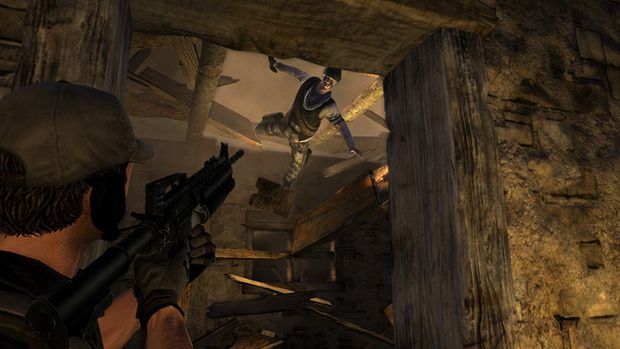 Breach doesn’t have a perfect action point of comparison, but it’s perhaps the closest to the original Ghost Recon. Guns have serious heft and accuracy is a fickle thing, requiring you to be completely still as you fire. The explosives, on the other hand, have an otherworldly feel. They pop out fast and the spread is enormous.

I spent the majority of my time tucked behind cover. You’ll find that the rest of players will be doing so as well because it’s so damn useful — not only in terms of what cover provides, but also because of the detached camera. You can see the battlefield so much more clearly in a hovering 3rd person mode and communicate positions quicker and easier.

On a bummer note, because of the fairly slow-paced crawl from barrier-to-barrier action, I wasn’t able to get much of a chance to use a gadget like the “Bionic Ear,” which gives players the ability to hear through walls. It’s just hard to get into buildings when everyone can see across the map and wait for you to move.

But in that sense, you’ll need teammates and a level of cooperative play we haven’t seen in some time. It’ll be interesting to see if players will respond to this challenge of working together, or just do their own thing constantly like they did in DICE’s Battlefield 1943.

Breach hits this summer for 15 bucks over Xbox LIVE Arcade.