Realtime Worlds bristles at the words “persistent Grand Theft Auto” when the media discusses its MMO APB. From what I understand, the studio believes the title does enough to distance itself. Social aspects and online play aside, though, I’m not sold on why GTA isn’t a solid point of comparison.

APB is a persistent open-world action game where players can maim, steal or just plain ole’ run amuck inside a fictional city similar to New York. The game features two distinct, warring “factions,” and uses their dissimilarities to great effect in small instance-based missions, or on-the-fly confrontations. In a sense, APB is an online version of “cops and robbers” with massive amounts of customization inside a GTA-like environment. 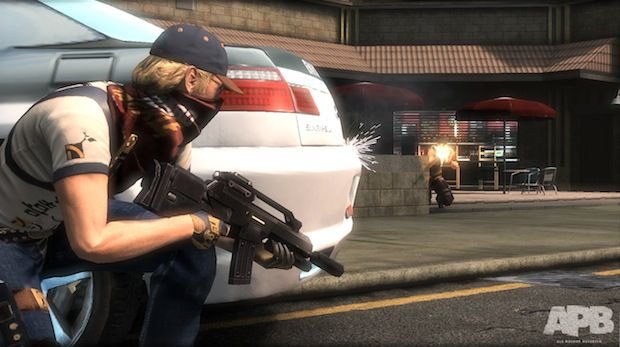 The Rules of the Road

The Enforcers are the cops, built to catch the other class, The Criminal, in acts of mischief and murder. In the open-world, Enforcers can arrest Criminals who are caught breaking into vehicles, killing civilians or looting stores. Most won’t go down without a fight, though. Criminals can kill Enforcers, and often do, as I’ve seen in Boston this afternoon.

Beyond that, there are the mission-based, structured objectives that can be taken from NPCs sprinkled around the map. Each mission “pledge” brings about an instance that up to 40 people can join in on if teams decide to start calling in “Back-up.” From what I’ve seen this afternoon, these missions are objective-based affairs (king of the hill; grab the package) that have players contending for several special spots or items on the map.

No Leveling, No Problem (Check out my ear ring!)

Don’t expect traditional MMO systems. There are no levels or statistics of any kind present in APB. Instead, character progression is measured through tiered, pre-customized gear and weapon upgrades. But even that is malleable. People have a robust amount of customization tools available at their disposal to change whatever they like: their face, their bodies, their clothing, their cars, and even the music that hits after they kill someone. This all feeds into the “celebrity” concept (one of the three C’s we learned about at E3). APB awards players with notoriety bonuses in-world for being as bad, or as good, as they want to be. 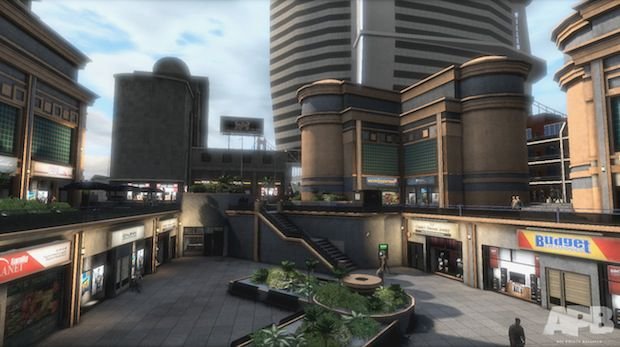 In my short amount of hands-on time with the closed beta build of the game, I got a sense of the city and its scale and several of the action mechanics. The city, first of all, has the feel of an up-start Liberty City. It’s more grounded in terms of storefronts and vehicles and features less NPCs. But there’s a Crackdown-type fluid element pulsing in the background. Each district can hold up to 100 people, all of whom are quite capable of doing stupid stuff wherever you go — and you do see them do quite a bit of stupid stuff and hit more than a few irreverent conversations in the process.

APB doesn’t feel alien, but it won’t feel like a pure shooter. Like most open-world action games, APB suffers from that “jack of all trades” loose kind of feel with all of its action components. The driving is stiff, the physics unyielding. The gunplay, which is particularly vital to the game, is much more serviceable but not defining. Battle is only, really, a combination of strafing tactics with lightweight weapons that fire with brutal accuracy.

In Beta, Soon to be Open Beta

Of course, this game is still in beta and things are subject to change. I was told this afternoon that Realtime Worlds will go open the beta floodgates to US hopefuls soon, so if you have a PC, an interest in APB, and a desire to steal digital stuff, you will get your chance in the near future. Just hang in there, duders.