Sequel stays true to its roots with four-player co-op

We learned a few days ago Dungeon Defenders II would have a new competitive MOBA mode but today we had the reveal trailer for the traditional four-player co-op that hooked me and friends so well. It looks like we’ll be playing the adult versions of the characters we know and loved in the familiar tower defense style.

As previously mentioned, the game is split into two parts, with the co-op mode launching in late 2013 or early 2014. I’m interested in the fact that cosmetic items, loot, and pets will transfer from the co-op mode into multiplayer. I accumulated a lot of gear in my time playing Dungeon Defenders and it’d be interesting to see this gear carry on into a new mode. 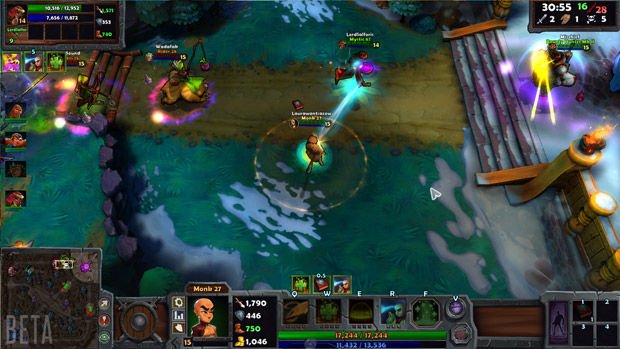 I played a round of the competitive multiplayer on the show floor and whilst my lack of experience with any multiplayer online battle arena games made it tricky, the familiarity with the core game helped me get a grasp on what was going on.

There’s the usual 5v5, three-lane maps with Dark Elves being the minions on our team. Although my team was soundly beaten, I did have a clear idea of what was going on; the bright and colorful art style was present as well as the third-person viewpoint.

The MOBA genre is already pretty crowded with giants like League of Legends and Dota 2 scooping up most of the players, but a new take on the genre, like Awesomenauts, can still stand out. I’m glad that Dungeon Defenders II will still have the same co-op tower defense mode that I enjoyed in the previous game, and who knows, maybe the persistence with gear and loot transferring into the multiplayer will get me finally hooked on a MOBA?