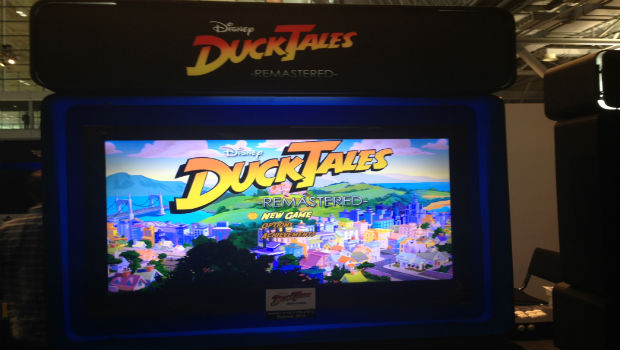 WayForward does it again and wows me in my hands-on

The original DuckTales on the NES is one of my favorite platformers of all time. The sense of exploration, the tight controls and action, and that soundtrack — if you haven’t played it yet, you’re in luck, as WayForward in conjunction with Capcom is coming out with a remastered version soon — and man, is it amazing.

WayForward’s hand-drawn graphics really look great in person, as do the animations, which stay true to the original. Some areas were even better than the original, as Capcom confirmed that the team re-watched the DuckTales cartoon series, and remapped some of the level designs to better suit the source material.

Likewise on the music, the team made sure when they redid the music, that they’d also keep it perfectly in line with the classic 8-bit tunes, all the while making sure it’s also updated for a new generation. That’s dedication, and it shows.

From a control standpoint, I was pretty much right at home even picking it up for the first time. Scrooge’s iconic main attack is the pogo-jump, which allows him to strike downwards in the air, similar to Link’s downward stab in Zelda II. Jump-cane cancelling was about 1:1 with the original, which allows for some pretty tricky maneuvers if you have the skills. There’s also some easier control options for people who may not have their pogo skills up to par. On that note, an easily accessible map is readily available with the press of the back/select button.

There’s all new story segments for each level as well, as I saw directly in the Haunted Castle level. Instead of randomly losing his nephews, there’s a mini-narrative that goes along with it that’s fully voice acted. After finding Huey, Duey, and Lewey, there’s another mini-cutscene after each rescue, with some cute DuckTales style banter.

The Capcom rep showing off the demo confirmed that they’ve gotten many of the original voice actors to return, even Uncle Scrooge, stating, “he’s like 90 years old, but he did an amazing job!”