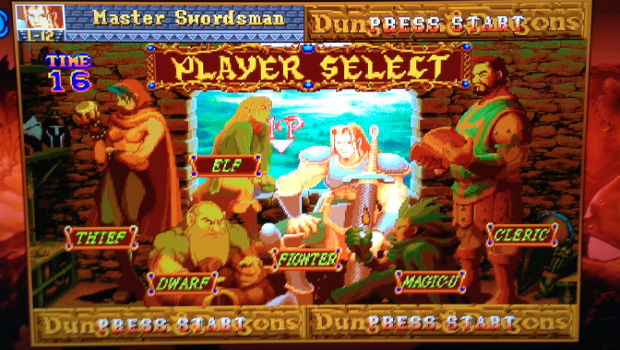 The fairly complex brawler up hits XBLA, PSN, PC and the Wii U eShop

As part of Capcom’s wave of surprise announcements, we learned that the arcade classics Dungeons & Dragons: Tower of Doom and Shadow over Mystara would be hitting the XBLA, PSN, Wii U eShop, and PC platforms as a double-pack called Chronicles of Mystara.

Only the 360 version was playable on the showfloor, but it showcased the four player drop-in, drop-out mechanic flawlessly. It’s a bit more in-depth than most beat ’em ups, as it has a fairly robust inventory system involving sub-weapons, keys, and some defensive options that you’ll have to juggle as you’re fighting off the denizens of the D&D realm. Surprisingly, the visuals have aged pretty well, and the animations look pretty solid even on a larger screen.

What I’m really digging is the challenge system, that’s found in previous Capcom re-releases like Darkstalkers Resurrection. The prompts are sitting there on the side of the screen overlaying the borders, as an optional way of extending extra challenges through a fun little XP bar. Also, it has the same filter and visual options as Resurrection, including scan lines. All these extras will pay dividends for a deep game like this, that you’re more prone to play for extended periods of time.

Capcom is really coming through lately with all of its re-releases. They’re optional games that old fans can enjoy all over again, and new fans can come to love. It’s also really nice that the Wii U was invited to the party this time around, and I hope it stays that way.