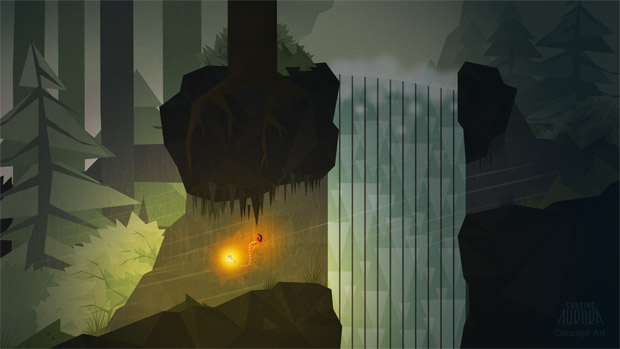 For the longest time, I wasn’t sure what Broken Rules’ Chasing Aurora was about, other than having a stunning vector art style. The studio’s previous game, And Yet It Moves, was interesting, as is the fact that this mysterious thing about birds will be a launch title on the Wii U eShop. I had to check it out at PAX.

And so I did, with a few other random people. Chasing Aurora is actually a multiplayer-centric game, so we all crammed onto on a very cozy couch to play. One person had the Wii U GamePad, which displayed everything on screen that he needed to play away from our curious eyes, while the rest used Wii Remotes and Nunchuks. The A button caused our birds to flap their wings, while the C button let us dive.

Generally, this all played out like a giant game of tag with variations on that theme between each mode. My favorite was quite literally freeze tag, where the GamePad-holding player would try to find us and make contact. Doing so would give him a few seconds on the timer and freeze the player in question, though we could try to free them by simply connecting with the frozen bird.

To win, at least one of us had to survive until the timer finished. Because Chasing Aurora allows for such precise movement, this mode had the adrenaline flowing, especially since each individual wing flap requires you to press the A button. The hitboxes are small enough that you can pull off incredibly narrow escapes.

There were a couple more modes, like one in which the roles were reversed and we had to catch Mr. GamePad. Another involved a “lead” bird to outrun everyone else. The camera follows that player as they try to get far enough ahead to cause others to fall behind and go off screen. As an eShop release, I think this will be an easy buy for those of you with enough controllers and friends willing to play. I’m not sure what else the game will include, but the multiplayer side of it was good, lighthearted fun.

While it isn’t too much to go on, this teaser video should help put more meaning to my descriptions: