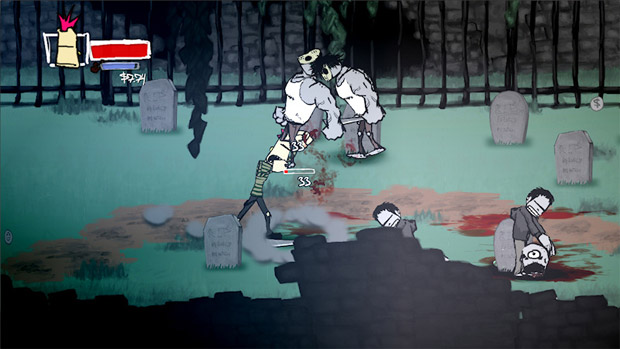 Do you remember that jump-scare web game in which you guided your cursor through a maze and, once far enough in, brushing up against the wall would cause an Exorcist head to pop out? Naturally, a far-too-loud sound effect played for added impact — and your speakers (or worse, headphones) would just so happen to be left cranked all the way up. Ska Studios’ new game, Charlie Murder, had me reminiscing about that and similar sites.

Charlie Murder is a sidescrolling beat-’em-up with stat-based, collectible loot and character leveling. Add in co-op support, and hey, this suddenly becomes the type of game I wouldn’t mind seeing more of. Conceptually and mechanically, most of what was shown in this hands-on build was described by Tony back in his preview. There was one aspect I had to highlight, however.

We made it to a section of the game where the only enemies on screen were these little ghost girls. Rather than charge up to us like most hired goons tend to do as per genre tradition, they simply walked back and forth on set paths. Unbeknownst to those of us playing, when someone bumps into one of these foes, everyone gets treated to essentially what I described above. And it was loud!

I won’t lie: I totally jumped; more than once, even. Despite this mildly embarrassing moment, I can rest easy knowing that children attend PAX and at least some of them are bound to be freaked out too.