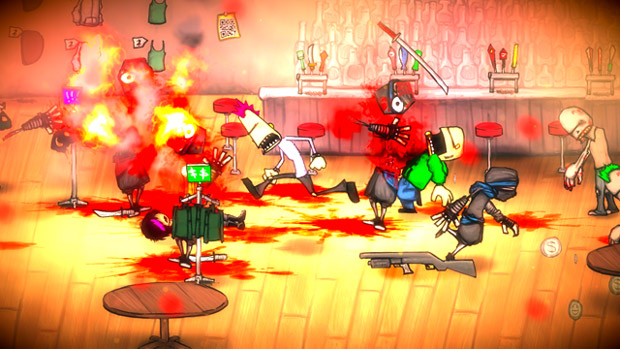 Ska Studios, responsible for I MAED A GAM3 W1TH Z0MBIES 1N IT!!!1 and The Dishwasher: Dead Samurai, has this other game called Charlie Murder. It’s been cooking for quite a while. All that extra time in the oven has done wonders, and hopefully, the XBLA game will be finished sooner rather than later.

If Scott Pilgrim vs. the World: The Game made love to the artwork of Jhonen Vasquez, and their baby started eating EVERYTHING, it would probably look something like this. 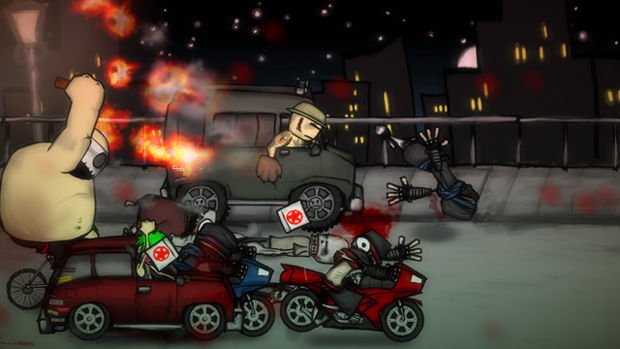 Charlie Murder is a brawler, but it’s nothing like the meh-tastic Double Dragon: Neon. No, this game is so packed to the gills with content that it can be quite difficult to keep track.

Charlie Murder is the front man of a band that most go out and stop a rival band from raising the dead and causing all other kinds of havoc. As a band, Charlie and company have to keep in touch with their fans. To that end, each character has a smartphone that can be whipped out at the press of a D-pad button. During lulls in the fighting, you can check emails or your Twitter feed, and the better you perform in the main game, the more fans that start following the individual band members. On top of that, the phone’s camera can be used to take pictures of QR codes scattered throughout levels, unlocking even more clothing.

Basically, this game is Diablo. Everything comes down to loot drops.

Story sequences offer a clever change of pace from the bloodshed. Instead of traditional cutscenes, the game flashes back to the band’s rise to fame, and you actually hold jam sessions and play venues via a simple rhythm game. Each band member plays a particular instrument, and you have to press the corresponding button for your character when it touches the line. In the demo, this section didn’t seem to have an effect on the main game, but I expect some kind of bonuses to eventually be awarded.

Ultimately, Charlie Murder is crazy overwhelming. It’s a blast to play, though, and it’s hectic enough that I think each play session will always feel fresh and exciting. It’s extremely violent, with severed limbs aplenty and curb stomping and mowing down folks on the street with cars and motorcycles. As Jem and the Holograms would say, it’s truly outrageous.