After Saints Row: The Third was finished, developer Volition wondered where they could take the next entry in the open world series. For Saints Row IV, the team took the two biggest key things from the third game: the completely over the top nature and the fun factor that came with all the absurd stuff you would do.

As we saw in the trailer, one of the biggest changes is that you’re the President of the United States now. Yes, really. You’re all the way at the top, so there’s nothing that can bring you down. Well, except aliens.

An extraterrestrial race known as the Zen have invaded the planet and have forced you into a virtual reality version of Steelport. Now you have to fight back against the aliens and you have a bunch of new weapons, vehicles, and even super powers to help you along the way.

One of the new features in Saints Row IV is that you can now customize weapons on top of upgrading them. The customizations don’t affect the performance of the weapons, just how they look. We saw a rocket launcher that could be changed into an SNES Super Scope and a guitar case like the one in the movie Desperado.

As for actual new weapons, we only saw a couple. One was a ray gun that causes people to get inflated and then pop. The other was the Dubstep Gun which sends out frequency blasts that makes everyone dance all while the visuals get distorted. Cute, but something that will probably get old fast if they use only one musical track for the gun.

Vehicle-wise, we saw a monster truck that players can use to crush cars. That was cool, but not as cool as the freaking mech suit. There’s a giant mech you can jump into with two big gatling guns that let you mow down anything in your path. You first get access to it in the Mech Suit Mayhem activity — one of several new activities — and will later earn it in the single-player.

Activities have gone through some tweaks as well in that you now get rated with a bronze, silver, or gold medal. This change was done to encourage replay value, especially as you have to get gold medals in order to unlock new items and other stuff. 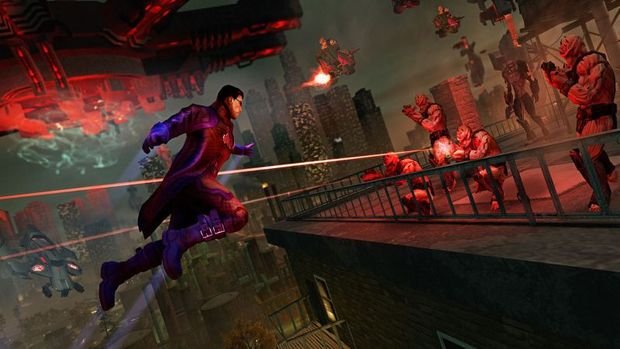 The biggest new addition are your superpowers, which you first got a taste of in The Trouble With Clones, the last piece of downloadable content for Saints Row: The Third. Basically you got super speed, the ability to jump literally over tall buildings, and can glide. In terms of attacks, you have super punches, can kick cars around, shoot out ice blasts that freeze anything, and can use telekinesis to pick people or cars and toss them around.

Super powers will be balanced, and you’ll have to upgrade them as you go since there will be meters in place that need to recharge with use, so you’re not just totally abusing them throughout the entire game or neglecting all the cars and weapons. Plus, the alien Zen enemies will make for a good challenge against your super powers according to the developers.

As for the world, it’s around the same size as Steelport but thanks to the super powers there’s a lot more verticality to it. Volition feels like this will be a new city to players because of the way you can move around as you super jump and glide around like you’re a Crackdown agent. Plus, there’s a lot of alien structures and spaceships all across the map that change up the feel. 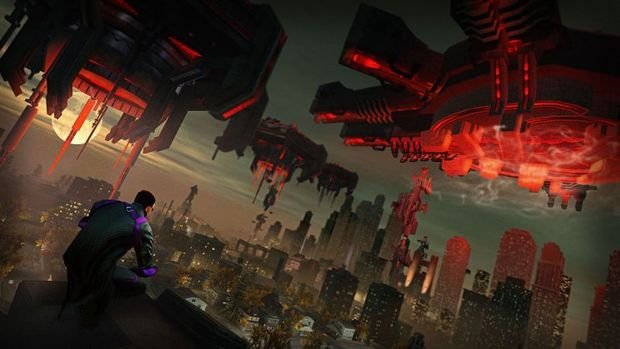 Saints Row IV will be compatible with the characters you made in the previous game. Your creations will carry over, with the exception of some of the clothing items as they’re not bringing all the clothing over from the last game. Volition, as crazy as it sounds, is even looking to make the game backwards compatible in that the charccters you create in IV can be imported back into The Third. They’re not certain if they’ll be able to do it, but they’re at least looking.

Lastly, drop in/out co-op is sticking around. Whored Mode has been taken out, but in its place is a new two-player versus mode where the goal is to kill each other using your super powers. Evidently, it was something that the playtesters found themselves doing a lot so they turned it into a full mode.

Overall I liked what I saw, but I’m remaining cautiously optimistic about this one until I get a chance to actually play the game. The overall feel is still definitely that of The Third, which I really enjoyed but after awhile the game lost its charm as everything just became way too easy. I’m not sure if I’m going to give this one the same attention this time around thanks to Grand Theft Auto V releasing around the same timeframe.