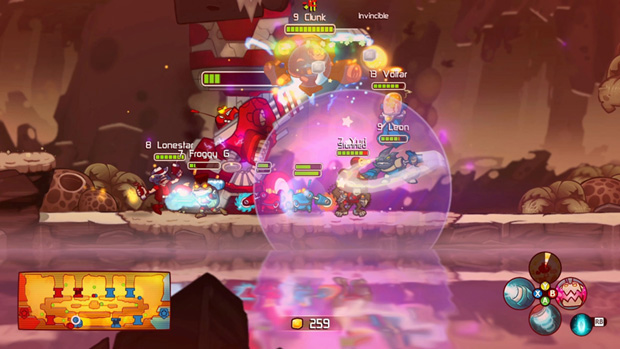 FPS arena games like your Quakes or your Unreals are great and all, but I have a problem with them: they’re in 3D! My mind can’t wrap around the complexities or the third dimension! I’m such a feeble being, and for that, I apologize.

What does that have to do with Ronimo Games’ Awesomenauts? Because Awesomenauts is solves my aversion to depth by recreating those same high-tension death matches in 2D. When the game comes to XBLA and PSN in May, you may want to step into the 2D-ness as well. 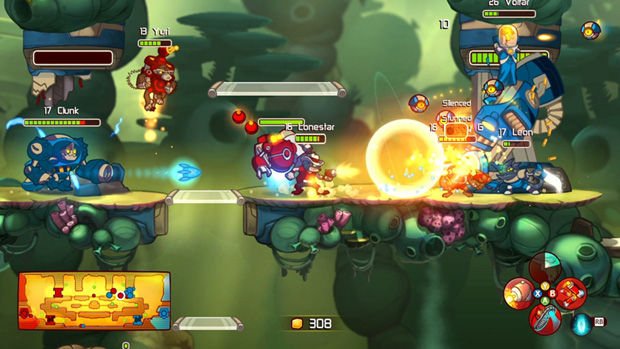 At its core, Awesomenauts is the same arena shooter that you remember, but there’s also a party mentality that you’d get out of something like Worms. You’ve got your red and blue teams, and you’ve got to destroy the enemy base, all while bright colors and bullets and weird green globs of whatever fly in every which direction. It’s crazy madness!

All matches are 3-on-3, regardless of the number of human players — the rest of the team is controlled by AI. You select from a variety of characters with different attributes. For instance, there’s a cowboy gunman with a space blaster who chucks dynamite and summons a blue, ethereal bull, and there’s a jetpack monkey who drops mines and fires a persistent laser that can ricochet off walls.

Before a match begins, you select which items and upgrades you’d like to be available in your home base’s store. Once your selections have been made, you are launched out of a UFO in an escape pod, and you must navigate down to the surface of the planet while collection cash along the fall. Every time you die, you will respawn at this UFO for another pod descent.

Once you land, shit gets real. You must take down the enemies’ gun turrets that block the path to their base’s core, which must be destroyed to win the match. You can generate helper robots from designated stations to help distract the turrets, and you can kill little critters scattered throughout to regain health or collect money. When the blue team, red team, critters, helper bots, and turrets all assemble in the middle of the screen, it’s just survival of the fittest. Pretty frickin’ incredible.

Awesomenauts is a multiplayer game through and through — there is no single-player campaign, unfortunately, unless you count playing solo with nothing but AI teammates and opponents. But if you’ve got a bunch a friends looking to blow the bejeesus out of one another, here you go!