The Xbox 360 indie scene is filled with a ton of throwaway games and “experiences” that incorporate your Xbox Avatar into the gameplay. It’s not surprising that Microsoft’s own Avatar Motocross Madness for Xbox Live Arcade sits in a neglected corner at PAX next to the much-more-frequented Tomb Raider and Forza Horizon booths.

Admittedly, I walked by the empty game booth a few times before my curiousity got the best of me and I decided to finally take a look. In a few minutes of play, I got the impression that Avatar Motocross Madness might be a bit more robust than what you might expect.

The main game mode I checked out involved a race in an Egyptian desert environment, called Dynasty City. The full game will have three different main locations — Egypt, Australia, and Iceland — and about four races at each location, for a total of 12 races.

What immediately struck me during my hands-on was that the vehicle handling was pretty tight, and that steering and performing tricks felt natural.

In Avatar Motocross Madness, you gain boost through performing tricks in a simplified version of the trick/boost reward system seen in games like Pure. The tricks generally seem to be your standard motocross set, though getting in a timely landing does play an important role lest you face a nasty crash and penalty that halts the game for a moment before letting you get back into the race.

The racing seems fairly well balanced, as I felt like I was being challenged enough to keep things interesting throughout the track. It took actual skill to keep up, rather than the sort of rubber-banding A.I. that games of this nature often employ. 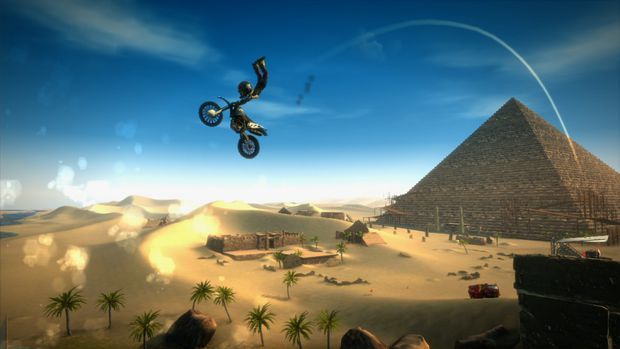 Avatar Motocross Madness also has a free-roam mode that immediately brought to mind hours I once wasted driving around in Smuggler’s Run or even the earlier MX vs. ATV series for PS2. In this mode, you wander around the desert environment grabbing coins and collectibles. I was told that although there was a time limit in the demo shown at PAX, the actual game would have no such restriction.

Another mode absent from the demo that is sort of like the free-roam mode is called Trick Session, where you compete against the ghosts of other players or against A.I. bots to get the most tricks in a timed free-roam session. While Avatar Motocross Madness certainly doesn’t seem to stray from an expected formula, I came away from the demo actually enjoying my time with it.

To be completely honest, I stopped by the neglected booth a couple more times during the weekend just to get a quick fix of a genre that I tend to love as a pick-up-and-play experience. As much as I absolutely hate most titles I’ve seen that incorporate Xbox avatars into their gameplay, I feel it’d be a shame not to mention this game as a genuinely enjoyable one that’s not too casual and not so hardcore that it gets to be frustrating.

Let’s just hope the price point will match the experience when the game releases in 2013.