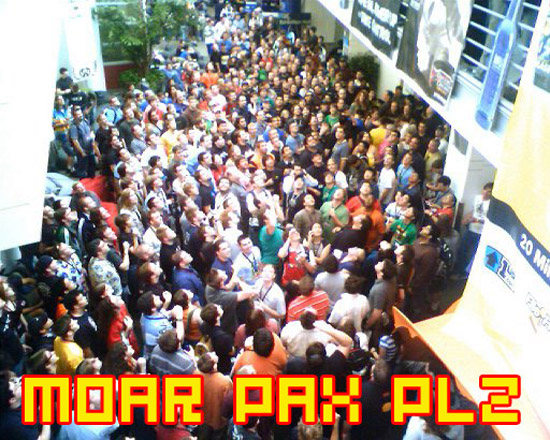 Many a PAX attendee declared it their favorite event of 2007, Destructoid members included. Naturally it’s still going strong, and already the announcements for the 2008 dates have hit. Looks like we get the pleasure of abusing Seattle August 29th-31st next year. Attendance has been encouraging to say the least, as evidenced in this passage from the press release:

You have to love guys who use the number bajillion in a press release. Then again, what else should be expected from dudes whose mascot is a juicer that has sex with food. Heroes of modern culture, I tell you!

In his PAX 2007 keynote address, noted actor, writer and geek icon Wil Wheaton challenged stereotypical notions of the antisocial nature of gaming, recounting stories of enjoying arcade games as a child with his brother, and sharing the gaming experience with his children. The theme of gaming as social interaction echoed throughout the three-day show, in panel discussions like “The Social Component in Gaming Today” as well as in free-play rooms filled with gamers competing against each other face-to-face, and in the popularity of “party” games like Rock Band and SingStar in the exhibition hall.

“PAX has always been about community,” said Robert Khoo of Penny Arcade, “and I think that was really reflected in the overall vibe of the show. PAX celebrates what it means to be a gamer, and walking onto the show floor gives you this sense of kinship … it just feels right.”

Now the largest game festival in North America, PAX 2007 featured an enormous selection of panels, tournaments, concerts and other activities centered around game culture. This year’s PAX was the first held at the Washington State Convention and Trade Center, a move prompted by the dramatic increase in attendance. Thus far, the festival’s attendance has doubled each year: There were 4,500 attendees in 2004, 9,500 in 2005, 19,300 in 2006, and 37,000 for 2007. Attendance for the 2008 event is expected to reach forty-seven million bajillion people.

Penny Arcade Expo (PAX) is a three-day celebration of games and gamer culture. The festival includes an exhibition floor filled with playable builds of upcoming tabletop, console, and computer games; a conference program of game-industry speakers on gaming topics; music concerts; freeplay areas; industry parties; game tournaments and more. Since its inception in 2004 the show has doubled in size each year, with 4,500 attendees in 2004, 9,500 in 2005, 19,300 in 2006, and 37,000 in 2007. For more information visit www.pennyarcadeexpo.com.

Equal parts online comic and commentary, Penny Arcade (https://www.penny-arcade.com) covers videogames in a way that is genuine, insightful and respected by the gaming community. What started as a hobby for Jerry “Tycho” Holkins and Mike “Gabe” Krahulik has, over 8 years grown into an online phenomenon that serves 55 million page views a month to millions of readers worldwide. In addition to the comic strip and PAX, Penny Arcade also manages Child’s Play (www.childsplaycharity.org), a gamer-driven charity for children that spans the globe.

Filed under... #PAX#Things gamers do