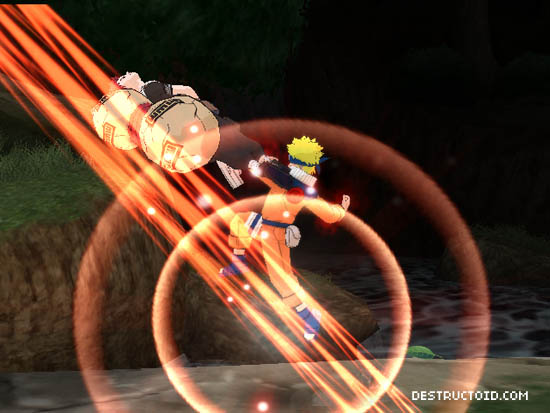 Narutard (a nickname for Naruto fans) or not, it was hard to resist the fist-shaking charms of D3 Publisher’s Naruto: Clash of Ninja Revolution on the Penny Arcade Expo’s show floor, and it seemed that everyone wanted try out this Wii brawler. On our own, it was fairly difficult to get our hands on this title, so we were glad that D3 Publisher gave us a little preview.

The following of the anime series Naruto is just about as large in the U.S as it is in Japan, but North American audiences are quite a bit behind on the episode airings, so a direct port of the game Naruto: Clash of Ninja Revolution is based on (Naruto Shippuuden: Getikou Ninja Taisen EX) would be a bit of a spoiler. Because of this, D3 Publisher had to rework the game to include characters from currently airing storylines. The addition of these characters (as well as a few more never-seen-before characters) and their new animations make this first Naruto Wii title a U.S. exclusive.

Once I got my hands on Naruto: Clash of Ninja Revolution, I could understand why it was difficult to get some face time with the title —  it is crazy fun, and no one wanted to put it down. I’ll be honest, I wasn’t exactly sure how my hand motions related to what was happening on screen, but I knew I was doing something, and somehow I was kicking ninja ass. Movement is controlled with the Wii Nunchuck, and attacks are executed Wii Remote movement and button presses. I asked D3 representative Stephen about becoming weary of Wiimote wiggling, and he mentioned that the game permits several control styles, including using the Wii’s optional Classic Controller or even the GameCube controller. That’s good to know, but really — what fun would that be?

Hit the jump for more on Naruto: Clash of Ninja Revolution.

Apparently I wasn’t nailing the special attacks correctly, but I did manage to watch other players successfully execute them. Once one of these special jutsu attacks begins, players are prompted to execute timed movements to continue (think Resident Evil 4 cutscenes), which added some flair to the standard Wii Remote wagging. Maybe I was missing something (or Sasuke is too emo), but even younger players managed to do these with ease.

Visually, the game is a slight step up from the GameCube Naruto titles, but the Naruto: Clash series titles were never a bad looking games in the first place. The cell shaded characters strongly resemble their animated visages, and the backgrounds look like they’ve been pulled directly from the show.

Aside from importing (Naruto Shippuuden: Getikou Ninja Taisen EX 2 is on its way to Japan), this October release will be the first time U.S. gamers will have had a chance to play a Naruto title made specifically for the Nintendo Wii. You don’t necessarily have to be a Naruto fan to want to pick up a Wiimote and Nunchuck and jump into a ninja beatdown — the almost two dozen characaters and multiple game modes (even a four-player face-off) should bring some much needed action to the Wii’s lineup.