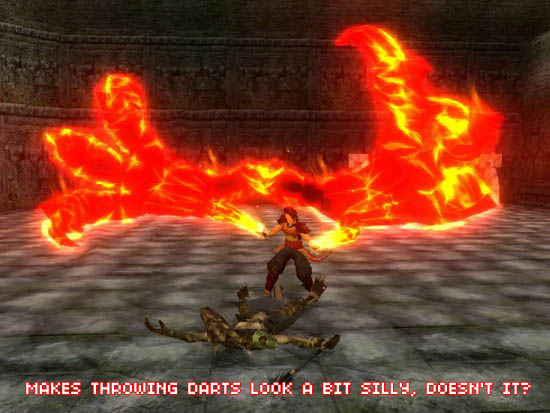 During this year’s Penny Arcade Expo, D3 Publisher was nice enough to take the time out to show us a bit of the upcoming Dragon Blade: Wrath of Fire for the Nintendo Wii. They let us “get our swing on” and channel a bit of dragon power in this Wii exclusive title.

Someone had to make a Wiimote whipping, sword-style hack-an-slash, and the makers of Dragon Blade: Wrath of Fire seem to have accounted for everything you’d want to add to a title like this. Consider the Wii Remote as the hilt of a sword, as the control scheme allows players to swing a sword up, down, left, right, or even forward and back. The on-screen sword moves accordingly, and chained combos are possible.

Throw out your preconceived about Nintendo Wii control schemes — as long as your movements aren’t weak or limp-handed, you’ll find that the game does a pretty good job of sensing your swings.  D3 Publisher’s Tamara Sanderson told us that a fencer stated that the control scheme was suprisingly similar to the sport’s actions. While I’m not a fencing pro by any means, I have no problem saying that I felt like something of a badass while doing forward thrusts with the Wii Remote, as enemies and barrels went down with ease.

Speaking of ease, you won’t find much of that in Dragon Blade: Wrath of Fire; this is a difficult game. While I played through the game’s early stages, I quickly found that causal wrist flicking was not enough to keep enemies back, and I had to step up my swings and timing to keep going. A D3 Publisher representative showed us later levels, and even he had trouble keeping the hordes off of him.

It is at times like these that you’ll want to whip out your Dragon Power out. Dragon Blade: Wrath of Fire has a sort of Mega Man-style power acquisition system, which gives you a new dragon part to use in your combat after beating sub-bosses. D3 Publisher rep Steven showed off several cool powers, including a fire-breathing dragon head, dual dragon claws (which were controled by the Wii Remote and Nunchuck independently), and my favorite: the whip (the tail of a dragon). All of them were fun and useful in hairy situations, though you’ll have to be sure to keep enough Dragon Power left in your meter.

While so many Wii games are shooting for casual and easy, it is definitely nice to see a title that aims to do something challenging and involving with the Wii’s motion-sensing abilities. The swordplay really seems like real-life swordplay, and your actions really feel like they equate to the on-screen actions. The camera takes a bit of getting used to, but the enemy targeting and camera-centering (C button on the Nunchuck) are effective, and you’ll soon have it down pat.

I’m pleased to say that Dragon Blade: Wrath of Fire seems to have moved us beyond button mashing for hack-and-slash gaming. We’re looking forward to spending more time with it.

D3 Publisher confirmed the September 25, 2007 release date, a date which you might also know as Halo 3 day.