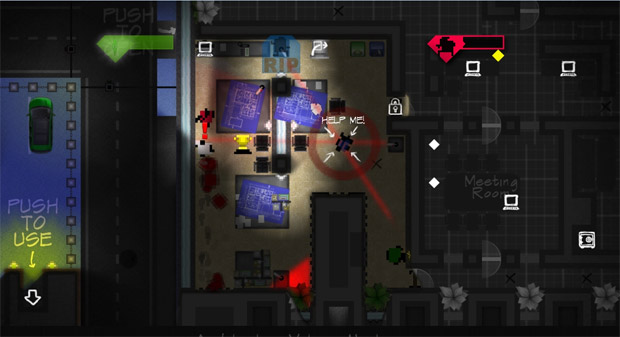 Andy Schatz and Chris Hecker were smart to get a booth at PAX Prime. So, so smart. Their respective games, Monaco and SpyParty, were a winning combination, and it absolutely showed in the faces of convention attendees.

We’ve covered Chris’ game a few times before, but for whatever reason, never got around to posting about Andy’s; this makes me feel like a total jerk. Monaco is a four-person co-op stealth title, presented in a top-down view not unlike most Rougelikes.

It won big at the Independent Games Festival, and for good reason.

In Monaco, you choose one of four characters, each with their own unique ability and specialty. The Prowler can see through walls, The Cleaner is able to use chloroform, The Muscle has C4, etc. The characters, combined with the setting and amazing old-timey heist music, mesh nicely.

Your mission — should you decide to accept it — is simple, as it should be: sneak your way to a prized possession while grabbing loot along the way, and escape; that’s pretty much it. Since co-op play is heavily emphasized, bogging players down with too much narrative build-up would be unwise.

What’s neat is, you get a completely separate vibe when playing alone. What was once a pick-up-and-play game that’d be stellar for casual get-togethers turns into a calm, intimate experience where you have to pick your moves much more deliberately.

Guards, civilians (who will alert guards upon spotting you), and security devices are significantly more hazardous when you don’t have a co-op partner to fall back on. When there’s no one to resuscitate you, every step matters and you need to be able to improvise on the fly.

Perhaps my favorite part of Monaco — and one that doesn’t show well in pictures — is the intuitive design for interacting with objects. Opening a locked door, hacking a computer, or climbing into an air duct — all of these actions are performed by pushing your character against the item in question.

A little timer circle pops up to show your progress, and you can stop whatever it is you are doing at any time. It’s brilliant. The problem with many stealth games is that their controls are so complex, being a badass super thief is overly difficult; not here. The other main issue with the genre is multiplayer — it’s usually a terrible mess when more than two players are involved; again, not here.

I also really dig Monaco‘s presentation. Whatever isn’t directly in your field of vision is displayed as a floor plan, complete with scribbles detailing important items. This gives you just enough information without making your dastardly goals too easy.

Monaco is, simply put, unlike anything I’ve ever played. At the current stage of development, it feels complete enough to be released on the market as a digital distribution title. As far as I know, the goal is still to get this on all of the usual platforms.

When Andy does actually think his game is ready for full public consumption, I won’t be surprised if it ends up feeling like something a big-name studio would put out, as far as polish is concerned. Either way, Monaco, as a concept, is the kind of game that could only be produced by an independent studio.

That’s one of the best compliments I can give a game, period.