Going into PAX Prime, I had only a vague idea of what Hothead Games’ Swarm was all about. Cute blue guys, something about hilarious deaths, and the mention of Pikmin. Alright, got it! That’s more than enough to grab my attention.

Hothead’s director of game technology Joel DeYoung and Ignition’s business development director Shane Bettenhausen gave us the rundown of this digital distribution title which draws inspiration from a few familiar concepts but executes them in an entirely different way than you’d expect.

Swarm is one of those semi-rare games that’s been in development on and off for years, which can either be awesome or horrible, depending on how you look at it. Joel made it sound as if this was a “we’ll get to it when we can give it everything we’ve got” title.

I love those types of games.

First off, those adorably dumb blue guys are called Swarmites. They are fearless creatures living on an impossibly dangerous world who just so happen to listen to your every command. How convenient! Unlike, say, Pikmin or Little King’s Story, you aren’t controlling a single unit here. Instead, you have direct control over 50 Swarmites.

Swarm is about getting your men to the next checkpoint while solving puzzles and avoiding traps along the way. As such, your swarm can expand, contract, use items, and even stack up like a living tower. That doesn’t sound terribly interesting — execution really is key with this game — but the way in which the Swarmites react to one another is rather neat.

For instance, when you press the jump button, the first of your creatures begin jumping while the rest have a delayed reaction. This ends up looking like “the wave,” except it’s somehow more organized than what you’d find at a sporting event.

Again, nothing mind-blowing, but it was one of many smaller touches that can end up making all of the difference in the long run. 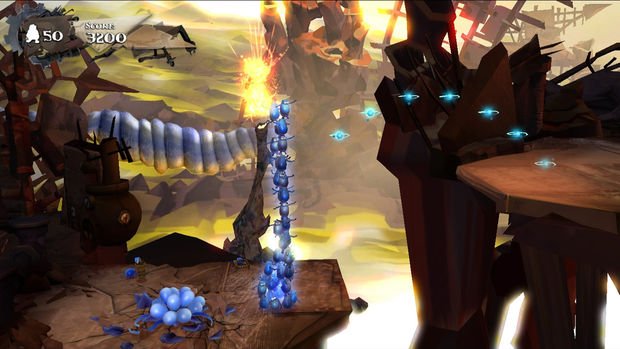 The overall goal isn’t to keep the entire pack alive, necessarily — it’s to get at least one Swarmite to the next set of “blue balls.” I also heard Hothead refer to them as “blue things,” for what it’s worth. Conrad watched the presentation with me, and throughout it he kept insisting that there was a joke hidden in there somewhere.

We never took the time to find said joke, thankfully.

Anyway, when you bump into these blue thingamajigs, your swarm count shoots back up to 50. In the hands-off demonstration I was shown, it looked like the placement was pretty smart. My impression was that Swarm will be enjoyable — never soul-crushing — and for those who want the extra difficulty, the tools are there to make the experience harder.

When your troops die, you aren’t supposed to feel bad. Death is an inevitable reality, but because the Swarmites look identical and can be replenished, it’s also temporary, so to speak.

Hothead stressed the importance of leaderboards, although nothing concrete was put on display. In our pre-demo chat with Joel, he was quick to mention Geometry Wars 2 as the definitive example of how leaderboards should be tackled. I agree wholeheartedly.

As for where you can find this title, well, there were on-screen prompts for a certain black controller designed by Sony. Even still, we were assured that Swarm is a digital distribution game pending platform(s). Oddly enough, this is more or less the norm for in-development, download-only titles.

Keep an eye out for Swarm in “early 2011.” It looks incredibly promising.