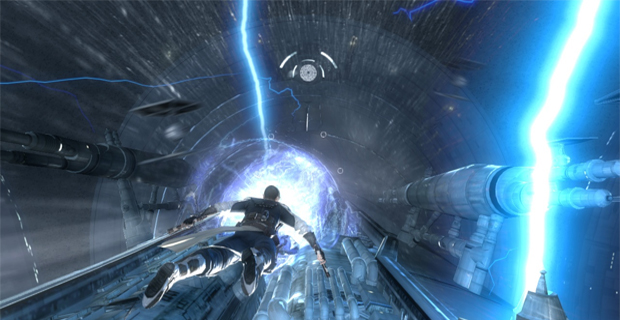 Poor Starkiller — he’s got serious issues. First, he’s dead. Second, he’s now a clone. Third, he’s the latest in a long line of clones who have gone insane as the memories of the original Starkiller began to flood their consciousness. Oh yeah, there’s also that whole fealty to Darth Vader thing to cope with as well. I like to call him the Forcerer’s Apprentice.

Despite his many personal problems, Starkiller always seems to find the time to whoop some arse. His first appearance in the world of video games featured a focus on frantic action, an accessible suite of different Force powers to be used creatively on the fly, and confrontations between opponents on a grand scale achieved through the controversial inclusion of quick-time events.

While many gamers and Star Wars fans alike were divided in opinion on The Force Unleashed, I found it to be an enjoyable title with a comfortable niche in the canon. So, at PAX I made it a point to spend some time at the LucasArts booth to get my hands on the sequel and ask some questions about the direction it’s taking.

While both the original and the sequel have a wide variety of powers to play with, the developers were very candid about some of the feedback they received. For one, the fact that many gamers often found a power or combo that worked for them and then rolled with it for the entire game defeated the purpose of providing so much gameplay variety.

This time around, certain enemies will have resistance or weakness to certain powers, forcing the player to work with all the tools at their disposal in order to be successful. In the short time I had with the game, I definitely noticed that my button-mashing approach from the last game was much less effective.

Lightsaber combat functioned mostly as it did in the first game, but the level of feedback the sequel offers is much improved. Certain strikes will result in decapitations and limb dismemberment, rather than stormtroopers just yelling and dropping after the saber passes through them. It’s a nice touch that gave me the sense that my lightsaber was truly a deadly weapon instead of a glowing stun baton — a pleasing Mos Eisley tavern moment.

Yes, the quick-time events are back in this installment, but they are there this time more to add finishing flair than anything else. The representative stated that the vast majority of the fights that give you QTE prompts will not require you to initiate the sequences in order to finish off your opponent. If you’re in the middle of a saber-swinging frenzy, you can run with it and continue to do damage and even kill enemies. This seems to me like a decent compromise; the QTE animations always look slicker, but it’s nice to have the option to mix it up and choose how I finish an enemy off.

My favorite new addition to the series, however, is the inclusion of the Mind Trick power. With it, you can induce a single enemy to jump to his death, or single out a trooper and force him to turn on his comrades and wreak havoc while you close the gap to mop up the mess. While I didn’t get to play with the upgraded version of this power, the rep explained that it would eventually give you the ability to influence whole groups. That alone is enough for me to keep my eyes on Force Unleashed 2; I’m excited for the chance to convince whole mobs of the dire wrongness of their droid selection.