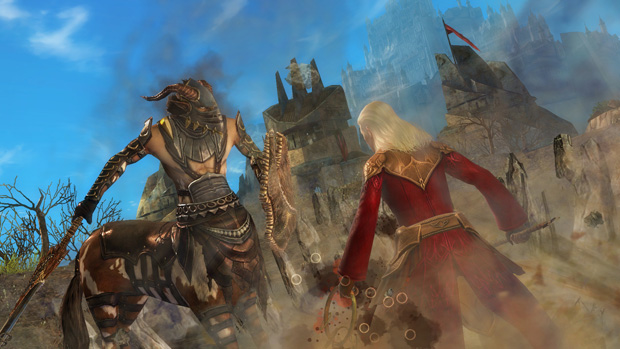 If you were at PAX, you know the lines to play Guild Wars 2 were long. There’s a good reason — Guild Wars 2 is shaping up to be one of the most interesting MMOs we’ve seen in a long, long time.

During PAX, some of the fine gentlemen at ArenaNet took me aside to show me some of the cool stuff they’re planning for the game. We already wrote about some of it in our gamescom coverage, but there was some new information available at the show, and we really went in-depth on some of the systems that we previously covered. Read on to hear about my time checking out Guild Wars 2. 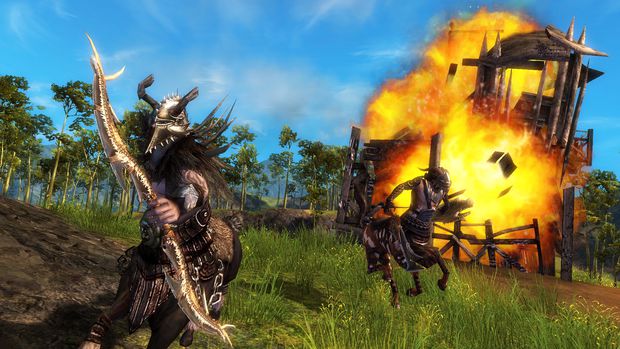 The first part of what I saw was touched on by Ian in his gamescom post — the customization and personality choices you make at the beginning of the game. The choices you make for your character at the outset have a massive impact on your personal quest line — a series of quests that are tailored to your character based on their background, race, personality, and the choices they’ve made throughout the game. Functionally, these quests are handled like your traditional quests in MMOs: NPCs with tasks that continue your personal story will have icons above their heads, and you simply speak to them to begin your quest.

Unlike traditional MMO quests, these tasks will differ wildly depending on what kind of character you’re playing and what you’ve previously allowed to happen in the story. A human noble who prefers to solve problems through diplomacy rather than bloodshed will have a totally different story arc and set of quests than a brute who grew up on the streets. To make the story even more personal, your character will be directly inserted into cutscenes, and the cutscenes will also vary significantly depending on all of the previous factors and variables mentioned.

Personalization is a big deal in this game, and this is also reflected in your appearance. The actual armor your character wears is purely cosmetic; stats and bonuses are instead conferred through crests that you socket into your armor. While it does sacrifice realism for the sake of personalization, since in the real world a pirate costume is obviously less effective than a full suit of plate armor, the crests will allow you to give your character a look you actually like, and will hopefully keep everyone from running around in identical gear. It also allows characters to become legitimately recognizable beyond the name above their head, with the idea being that you start recognizing people on your server simply based on their looks. 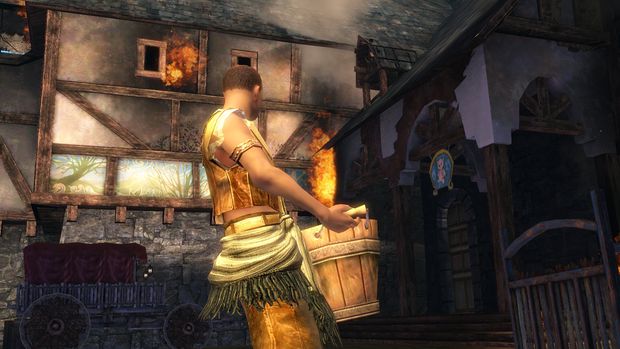 Your personal story quests, however, likely won’t make up the majority of your playtime. In fact, a good portion of what you’ll probably spend most of your time doing in Guild Wars 2 won’t even be NPC-given quests at all. The dynamic event system that’s being introduced is much more impressive than I was first led to believe, and one of the main reasons I nominated Guild Wars 2 as a Destructoid pick for PAX Game of the Show.

When this system is described as dynamic, it really means it. The only NPCs with quest symbols over their heads are for your personal story — the rest of your adventuring will be done by exploring the map. An NPC in each area will mark off a large number of spots on your map where people may need help, but you won’t have any idea what actually needs doing, if anything, until you get there. Events are randomly coded to trigger at various times all across the map, and most events feature multiple ways to contribute.

Visit a farm when everything is fine, and a farmer may ask you to help feed his cows or water his crops. Come across the farm as a bandit raid is occurring, and you can either jump in and kill the bandits, or run around and help try to put out the fires they’ve started. Stumble across the farm after it’s been captured by the bandits, and fight to reclaim the farm and drive the bandits off. Other examples shown included fighting a giant lizard-monster in a river — it was preventing fishermen from fishing, which subsequently crippled the nearby village’s economy — and a mass-scale battle where the Charr fought off an enormous dragon. Whatever the outcome of the event, it affects the game world and subsequent events — keep too many bandits alive, and eventually they’ll start expanding, forcing players to actively thin their numbers. 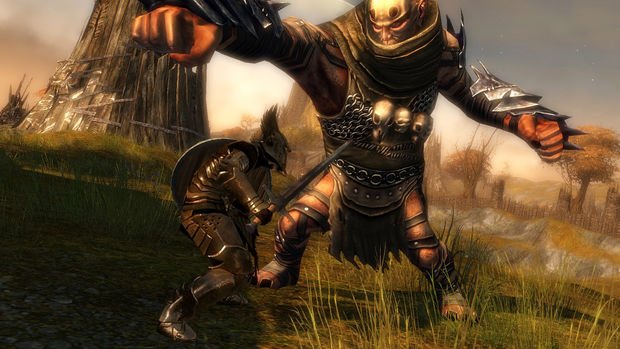 These events are designed to be social, with players able to jump in and out at any time. You don’t need to have any quest active, have a group or party all gathered up, or have talked to any NPC — if you come across an event and participate, you get experience and loot for it. As players join and drop an event, the event scales accordingly. If there are only two people around to fight the river monster, the fight’s difficulty will be appropriate for two people. If a group of ten joins the fight halfway through, the monster will change, instantly becoming stronger and gaining new crowd-control attacks. Upon completion of the event, everyone who participated in some way will get some sort of reward — the developers said they specifically want to avoid scenarios where large groups of players work their way through a battle or dungeon, and only two or three actually get any equipment or gold from it.

Continuing the discussion on combat and events, ArenaNet told me that they want to make sure players don’t get too bored while locked into a specific role. Classes are present in the game, but each class will have a wide variety of options. I was shown the Elementalist, who is mainly a spellcaster, and how she could switch between roles. As an Elementalist, she could attune herself to one of the four elements. In Fire attunement, her skills were mostly focused on quick, direct damage. When she switched to Water attunement, her skills became much more support-based, and her role in the event shifted from dealing damage to helping all the other players around her. I also was shown a Warrior who switched between a two-handed heavy-weapon fighting style to a ranged style using his bow. 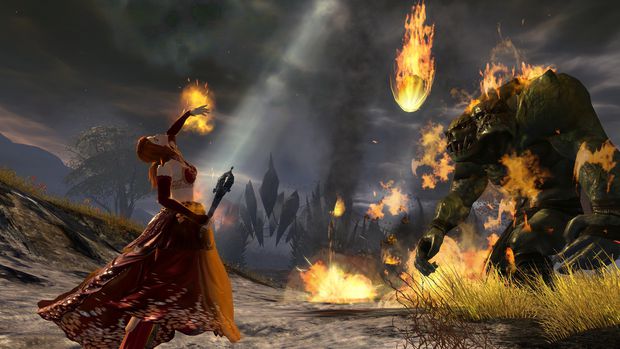 You even have the option of avoiding combat. Any character of any profession can revive fallen heroes, so if you’re tired of flinging fireballs, you can roam the battlefield as a sort of combat medic, picking up any casualties of battle. In the dragon battle, some players made it out to the outskirts of the fight, where they were able to use mortars and other siege weapons to battle the dragon from a safe distance.

Regardless of the role you play in an event, the game itself is very action-oriented. Characters can run, jump, and dodge in the middle of fighting, and almost every skill can be used while your character is moving. Auto-attack is non-existent, so you need to be pushing a button every time you want your character to act. The developers have said that they want players to feel as if they’re actually doing something when fighting, but still want to keep an RPG feel to the entire system. 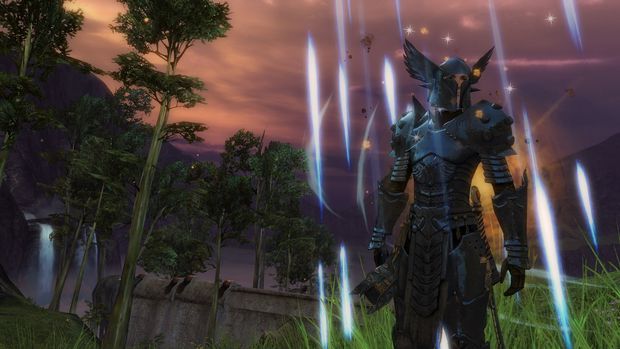 Even though the dual-class system from the original Guild Wars is gone, there are some cool ways in which different professions can interact. Many skills you use in combat will leave a mark on the ground — the example I saw was when an Elementalist threw down a wall of fire. In addition to damaging enemies in its path, the fire continued to burn on the ground as the battle progressed. If someone with a ranged weapon shoots an arrow through the fire, they end up shooting a fire arrow. A Warrior who uses a whirlwind skill to move through the fire will fling fireballs about as he spins. These cross-class skills appear to add an entirely separate strategic layer to battle, as you not only need to focus on simply hurting the enemy or healing your comrades, but must also consider how to best maximize your cross-class ability potential.

In addition to dynamic events and personal story quests, there will be some instances as well, especially as characters near the endgame. Instances are currently planned to be five-man, and like most MMOs can be run multiple times. You’ll also be able able to revisit older instances with lower-level friends without steamrolling everything for them — the instance will downscale your level to match those you are partied with, allowing you to still enjoy the challenges of earlier instances and to group with your friends. How much these instances will differ from the standard MMO instance is unknown, as the actual inside of one wasn’t shown during my demo. 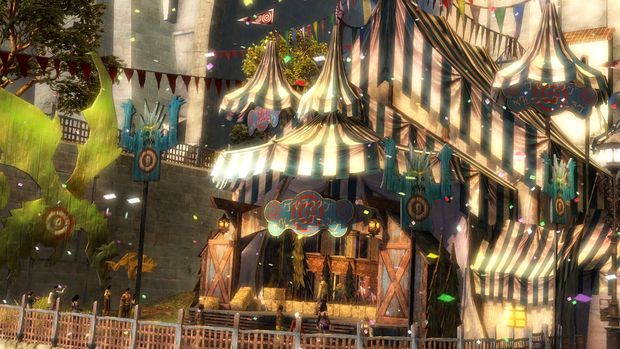 One of the lessons learned from the first Guild Wars was that while instances are good for the story, they aren’t great at building a community, and community is one of the main focuses of Guild Wars 2. The cities of Guild Wars 2 are being designed as social spaces — ArenaNet wants people to do more than just show up in a city to use the auction house and immediately take off. There will be significant NPC interaction in the cities, and one example I saw of this was a collection of “activities” scattered throughout the city, which were functionally short mini-games like a shooting range. I’m not quite sure that players will want to spend a lot of time in the cities instead of participating in events, but there may be enough features in the cities by launch that make the cities legitimate places in which to hang out.

It’s difficult to talk about this game (and probably unprofessional) without getting overly excited, but it’s great to see ArenaNet try something truly different in the MMO market, especially since so many current MMOs follow extremely similar structures. It’s also great that, like the original game, Guild Wars 2 won’t have a monthly subscription fee. That said, it’s important to approach any upcoming release with some degree of skepticism, but I will truly be shocked if Guild Wars 2 ends up as a failure.