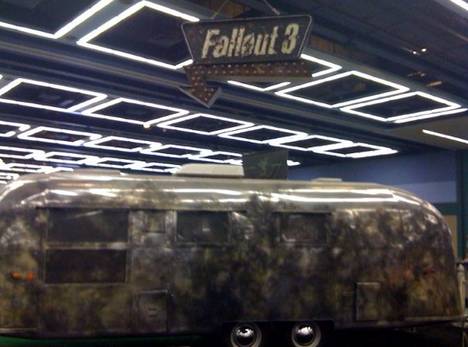 Bethesda’s Pete Hines snapped a few mobile shots of the Fallout 3 booth at the Penny Arcade Expo and posted them on his Facebook this afternoon. When I saw them, I thought two things. First, holy crap — they really went all out with the booth. Then I remembered — Fallout 3 is totally playable at the show starting tomorrow!

Yup, PAX will mark the first public hands-on of the saliva-inducing title, and Bethesda will have six kiosks set up in their booth. Considering there will be more than 50,000 people at PAX this year, that means everyone will have approximately 30 seconds to try it out before another sweaty nerd knocks them out of the way.

But even if you don’t get a chance to play it, Bethesda will be handing out “Vault Dweller Survival Guides” to everyone who stops by the booth, which is some consolation. We’re also being promised Fallout 3 gameplay footage that will be a “very condensed” version of the PAX playable demo.

We’ll be checking out the booth, the game, and the hot swag tomorrow. Stay tuned for hands-on reports and other PAX-related antics all weekend long.