Little Red Riding Hood with giant boobs and a giant gun to match is a pretty awesome sight to behold. Add in that she’s suited up in such a fashion to blast the everliving daylights out of drooling zombies, and you’ve got a killer concept on your hands. Suffice to say that I made a beeline for Destineer’s booth in order to check out Little Red Riding Hood’s Zombie BBQ as soon as humanly possible.

Hit the jump to see new screens (including a bossfight!), concept artwork, and hear a little more about my adventures as the pleasingly endowed Miss Hood.

I’d have been pretty thrilled to play this game as Little Red Riding Hood, but before I go barreling into that I wanted to mention that she is not the only hero you can play in Zombie BBQ. At the start of the game you are actually prompted to play as her or as Momotaro, and in case you aren’t aware, Momotaro is actually a popular character from Japanese folklore who came to earth inside a giant peach. Talk about dramatic debuts! 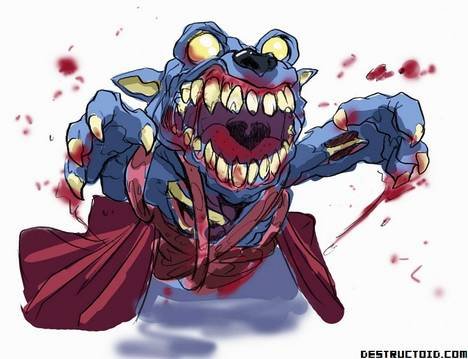 Your story is basic: Fairy Tale Land has been invaded by flesh gobbling minions of the dead and it’s up to you to stop it. Let’s be honest, the story is merely a backdrop. The last time I checked, a poignant, meaningful story is not really a popular accompaniment to the decapitation of the undead. Let’s get on with the action here. 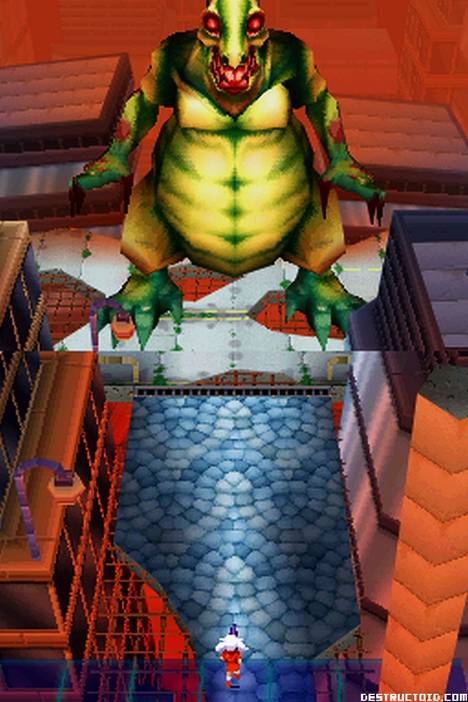 Zombie BBQ had one big surprise to offer which I admit to being completely unaware of before getting hands on time with it: it is actually on rails. The way I feel about rails is that is is pretty much ok with me in one game, that game being House of the Dead. Beyond that, they tend to make me feel a bit restricted. Ok, so there’s one strike against it, but I’m not going to judge — after all, we still have zombies, fairy tales and tits on the agenda here.

As you can tell from the screenshots, your character of choice scrolls up the screen vertically with the ability to move left and right to properly target the beasties in his or her way. I played as Red Riding Hood, which allowed me the use of a machine gun for long range attacks as well as grenades. All the attacks are touch enabled. You can also attack hand-to-hand once the zombies get close, but after having my face gnawed off I realized this is not the best strategy.

Zombie BBQ feels a bit like a retro game in that you push your way through the levels fending off baddies and come up against a boss at the end of each. Despite my initial reserve about the on-rails movement, I still left feeling excited about getting my hands on the final title. I can’t wait to fight the Three Little Pigs (although if they are anything like what I already saw, there’s an equal chance they’ll turn me into a porkchop before I can defend myself).

If you’re looking for a simple, satisfying experience with just a pinch of kitsch, Zombie BBQ is shaping up to fill your need quite nicely. We’ll give you the final lowdown soon after we do a full review.