We managed to get a peek at Damnation at E3 earlier this summer. We were glad that Codemasters had us over to check it out, but we were a bit bummed to see that it was a hands-off preview. Luckily we were finally able to get some hands-on time with Damnation at PAX.

As we said in our earlier coverage, Damnation is not your typical shooter. Rather than moving only forward or back, players have freedom of movement, sometimes climbing up poles or hanging off the sides of buildings. They call it a “vertical shooter,” and I think that’s a pretty good description. While you’re still equipped with guns, and baddies are always running you down, sometimes the game play more closely resembles Prince of Persia than Gears of War. And this is a welcome change in my book.

Damnation is set in a world that you might call an Orwellian alternate America. It has an early 1900’s mostly-American feel, but there are also European elements and steampunk influences. The setting is unique to say the least.

We had a chance to play through the same level we saw at E3 earlier this year, this time around sporting some touch-ups. Playing as Captain Hamilton Rourke, I was introduced to some early puzzle-solving elements.  I had to shoot at the devices that would eventually lower a bridge to let me cross. Apparently this bridge was designed by someone who didn’t pay attention in bridge making school, as a gap in the middle of the bridge still remained after lowering both sides. I suppose it did a good job of demonstrating Damnation‘s jumping mechanic, though. Later I was also able to scale buildings, shimmy up poles, and sprint to make the jump across large gaps.

In the game I ran with two AI helpers, who both did a fine job of helping me pick off enemies. As Damnation is pretty open and free as far as level design goes, these allies are also helpful in showing you where you might want to go next. Even then, you can totally skip their advice and go your own way. I did find that things are a bit easier if you follow their advice, but if you’re a better shot than I am, you’re free to do as you please. This makes for very refreshing game play, and it sometimes gives a sense of exploration. Of course, you’ll have to cover your own ass while exploring. 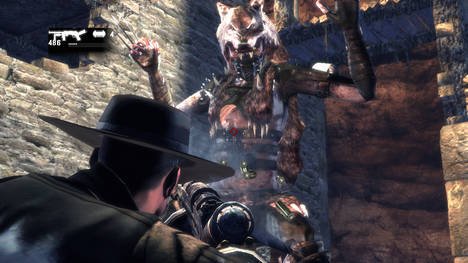 Upon taking control, I immediately noticed a different feel from recent third-person shooters. As far as movement goes, things seemed lighter and less weighty, helping out the more acrobatic, platform-ish game play they’re going for. Targeting was also pretty nice; I was able to manage just fine early on, which says a lot for someone who is not great at shooters. Jumping and other alternate movements were also tight, though I did have a bit of trouble interfacing with things like poles and ladders at first. They tell me that these bugs are being worked on.

Combat was fast and fun. The overall game play design has you thinking less about taking cover and more about making your shots count. I did have to watch my back, picking off snipers and the like. It also seems like there was a few bugs in the picking up items code, but I’m sure that will be worked out.

I realize that on paper, an “vertical shooter” with acrobatic platforming elements sounds a bit weird, but it all seems to work in-game. We’ve only been able to see one level so far, and none of the co-op or multiplayer elements, but it seems that things are definitely headed in the right direction.