Hands all over is more like it, actually. Alien Hominid fans (of which I am certainly one of the biggest) have been clawing away at the intertubes for months in search of any snippet of info they can find regarding The Behemoth‘s latest XBLA project. Blurbs, screenshots, maybe a few seconds of video, anything that can serve as another appetizer to temporarily shush the rumbling in our bellies is a welcome treat. Imagine my delight, then, when I arrived at this year’s Penny Arcade Expo and saw the wide grin on my friend Miguel‘s face as he walked toward me and said the words: “Playable demo”.

A sharp right at the entrance to the event’s exhibition hall would bring us to a beautiful display of Dan Paladin’s artwork and a thick pack of fans huddled around a 360 kiosk. We’d been lusting after this title for a very long time, and now was our chance to finally play it. Was it everything the hype train told us it would be? Hit the jump for my impressions. 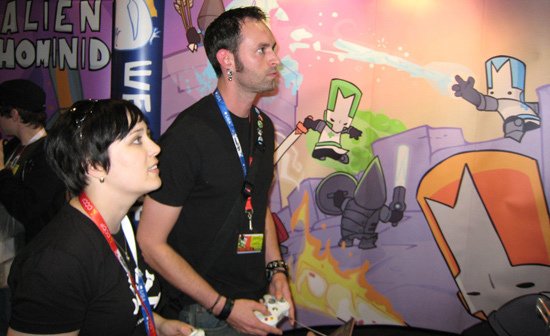 Once everyone’s through arguing over which of the four knights they want to play as, you and your crew set off to rescue the kidnapped princesses. The art direction and animation speak for themselves, so I won’t get into that just yet. The first not-so-obvious thing that struck me when the game started was the music.

If you’ve played any of The Behemoth’s flash games like Dad ‘n Me (dear God, put that on XBLA, that game is brilliant,) you already know they have a keen sense of finding the perfect tuneage to complement what’s on the screen. Castle Crashers is certainly no exception. The level is played to the tune of a thundering “DUN DUN DUN” that makes you feel like “Oh, yeah … we’re heading out to seriously f*ck sh*t up.”

I took advantage of the peace and quiet at the very beginning of the stage to try out jumping and slashing, admiring the fluidity of all the character animation, but by the time the first few enemies appear, the game quickly throws you into a non-stop ass kicking party. My three partners and I went from short grunts of “Heh, cool” with the first few satisfying kills to flat out laughing our heads off when things really got going. Remember mowing through your first batch of agents in Alen Hominid and the maniacal glee that came with watching your character bite heads and slice bodies as you mashed on the attack button? Yeah, it’s that sweet. I might even venture to say it’s sweeter.

You have two basic attack buttons, and you’ll find that as you try out different combinations of button presses, the methods by which you can wreck shop are seemingly endless. Charged attacks, combos and the added bonus of magic abilities (Orange Knight uses fire, Blue Knight uses ice, etc.) make for a wealth of gameplay possibilites and awesome attacks without ever over-complicating the controls. That’s not to say that the game is too easy, in fact the difficulty level is just about where most players will like it, but there’s no reason the more noobish among your pals wouldn’t be able to jump in and have just as much fun as you’re having. 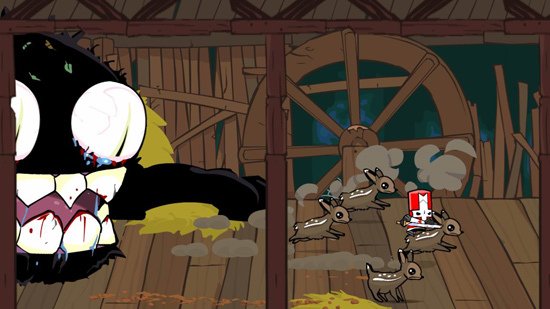 Do you really need me to tell you about the visuals? Look at the screenshots. Watch the video. It’s beautiful, and when you see it in HD it’s likely to introduce Mr. Jaw to Mr. Floor. The animation and character movement is everything you’ve come to expect from Dan Paladin and his team, and it’s evident in the first minute or so of gameplay that all the time it’s taken to create this game was very well spent. The knights flip and jump, hack and slash, and look impossibly badass through every frame.

I didn’t get a chance to see any single-player mode, only because people were crawling all over this thing and there wasn’t an unclaimed controller the whole time I stood at the booth, but I can’t imagine playing this game and not having a blast, whether it be local 4-player, online, or all by myself. The multiplayer is undoubtedly a huge part of this title’s appeal, and you really get a great feeling of “C’mon, let’s GO!” comradery when you play with three other people. That is, until you’ve defeated a boss and it’s time to free the captive princess. It’s at this point that co-op rockets out the window, as the game pits you against your three buddies in a battle for royal makeout privelages with her highness. Collaboration? Hell no, you want the girl. These loyal brothers who moments ago aided you in reaching this point are now after your kool-aid, so get ready to beat the ever-loving crap out of each other. 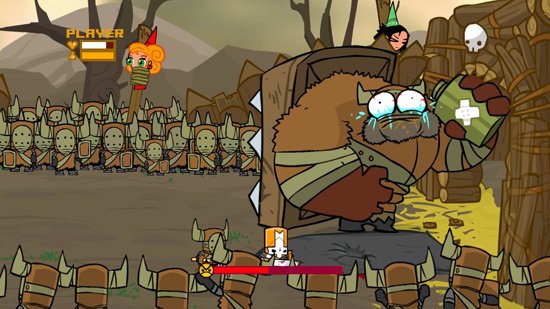 Collectively, I probably spent about an hour playing Castle Crashers over the course of the weekend. Having experienced this much of the game, I have to now mention my one major complaint. One thing that drives me crazy about it. It’s not out yet. I left PAX starving for more of this game. Were it available to me now, you wouldn’t be reading this because I’d be sitting on my couch burning up the battery in my 360 controller. Whatever is holding this up, whatever is standing between this game and XBLA needs to die a swift death, because I don’t know how much longer I can wait to play it again. I wish I could tell you its release date, but I can’t. One thing I can tell you, however, is that The Behemoth has done it again, and when Castle Crashers is finally realeased, it will be worth the wait. So worth it. Long live 2D.