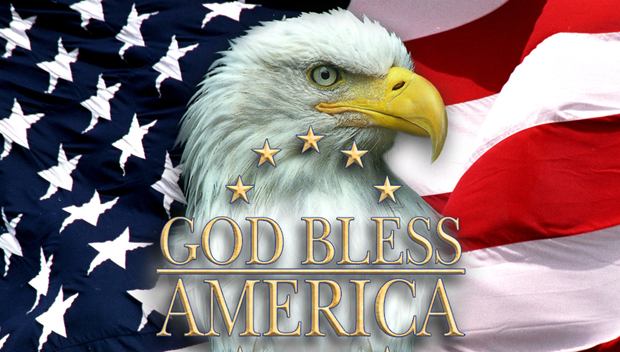 So, I guess it’s a Holiday today. That’s one of the reasons why I don’t have a Sundays with Sagat to show you this week, which makes me very sad. To make up for it, I thought I’d try to throw together a couple of topical features. This first one is about patriotism; specifically, videogame patriotism.

One of the many things that I love about videogames is their power to take things that people don’t take seriously enough, and show those people what’s up for real. For example, people these days don’t apply enough seriousness to the worship of our country. There was a time when the citizens of the United States knew how to stick together, knew how to prioritize each other, and knew who was worth talking to and who wasn’t. These days, thanks to stuff like internet and cable television, that’s all changed. Regular Americans interact with people from other countries every single day. That’s probably why a lot of Americans have gotten the idea that maybe, just maybe, people who do not live in the United States might actually be worth a damn.

It’s so ridiculous that it’s almost funny, but it’s also scary, and therefore, it makes me extremely angry. With that anger, I will summon up a piece videogame journalism that will show the world once and for all that America is better than every person, place or thing ever made, and that God loves America more than it likes other places.

Hit the jump for the full patriotic rundown.

Metal Wolf Chaos is a video game about the President of the United States battling with this Vice President guy for domination of the country. Instead of battling with the usual political arsenal (catch phrases, insults, pay-offs, and cover-ups) these guys duke it out with giant robots. It’s basically Air Force One with metal gear, but here, they call them “metal wolves.” If going from “gear” to “wolf” isn’t an upgrade, I don’t know what it.

Strangely enough, the game was only released in Japan. Why would Japanese people want to play a game about the American President riding around in a robot, kicking ass? While it adds up that they’d want to play a game about an awesome person doing awesome things, chances are that they’d have serious problems relating with the main character (for reasons too obvious to mention.)

More so, who thought that Americans wouldn’t want to play a game like that? Did the game’s Japanese developer/publisher assume that we might be a tad bit insulted to see our President single-handedly take out hundreds of American citizens while riding around in a mighty robot? Did they think the references to the Florida recount and commonplace public executions might hit too close to home for us?

They couldn’t be more wrong. Not only are three of those true aspects of American life, but they’re also part of what makes America so great. I applaud the Japanese for creating Metal Wolf Chaos, but I wish they’d shown a little more pride in their work, and respect for Americans in the process. 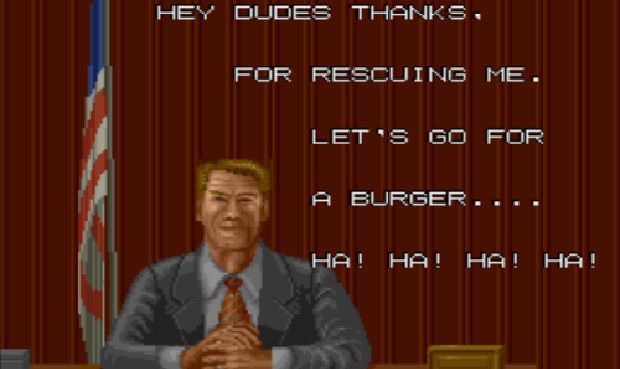 The President is a brave and homicidal mech pilot, but when he’s just hanging out, he’s just a regular guy. When ninjas attack, he doesn’t have much of a chance.

Don’t act like you could do any better against, because you couldn’t. I’m sure in your mind you have this whole “self defense routine” worked out, but these are ninjas we’re talking about. They may not be American, but they probably are, and they’re also ninjas, and terrorists too. Americans, ninjas, and terrorists are the three most powerful forces in the universe. Go up against that kind of power-pack, and you’ve got no way out but fucked.

For the sake of conversation, let’s say you do have a chance; that you are a bad enough dude to take out the ninjas and save the President. What would you expect as a reward? If your answer is “It was my honor to serve you sir, and thanks for the burger”, then you just might as great as you think you are.

Everybody knows that the more you want to go out with a guy for a burger, the better leader of the free world he’d be. Bush, Reagan, and Clinton weren’t the smartest men in the country at the time of their Presidencies, but everyone wanted to eat burgers with them. That’s what got them elected, and that’s why they’re some of the best Americans ever.

I’d be willing to kick the crap out of a million ninjas if that’s what it took to eat half a burger while gazing in the eyes of those three charming gentlemen.

Everything I need to know about politics I learned from Campaign ’84 on the Colecovision.

First, you decide where you stand on a variety of important issues that Americans face every day, like saccharin or plaid socks. Then you need to decide, are you an elephant or a donkey? You better pick the right one, or else no one is going to ever take you seriously.

After that, you wander around in a black void for a while, touching time and avoiding bad press. When you’re out of campaign hours, it’s over! If you win, and you don’t have to try anymore! If you lose, then just try again with more money and less bad press. You’ll get there eventually.

Yeah, that’s the glory of American politics in a nutshell. 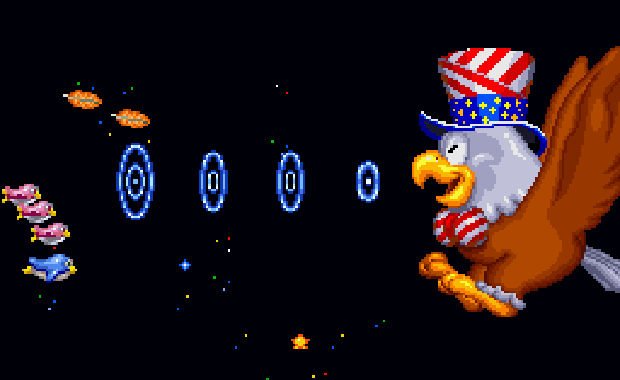 Speaking of animals that represent America, check out this screen from Parodious. Doesn’t it just make your heart soar with pride and power? The game is filled with ridiculous, idiotic imagery, yet when it came to representing American, the game’s developers knew that they needed to keep things serious.

The eagle in the top hat is the most powerful boss in the game. You actually can’t beat him, unless you let him invade your country, then bore him to death with tedious “elections” and annoying “cultural instability that can’t be remedied without years of work and trillions of dollars.”

After that, he just sort of takes off, surely to spread his goodwill and leadership throughout the rest of the world.

What a cute little hat!

Another thing that’s awesome about America is that foreigners love us. There’s a lot of reasons for that, but “the freedoms” have a lot to do with it. No other country gives you the level of freedom that American does, including “freedom of body shape”.

Don’t like fake boobs? Well, that’s just un-American. I’m not sure I like you anymore, Niko Bellic. Maybe should should go back to Micronesia where you came from.

Sakura Wars: So long, my love

So, Niko Bellic may have failed at appreciating America, but what do you expect? He’s a stupid, ugly man with a thick accent and bad skin. My kind of foreigner is significantly less ugly and doesn’t question American cultural norms.

That’s why Sakura Wars is so great. It’s got tons of foreigners in it, but they all love America, and they all look exactly the same; like pretty, American ladies. They also know how to sing and dance, which is a good thing for foreigners to do.

Don’t get the wrong idea, I’ll never trust someone from another country. That said, America was based on the principal of letting non-Americans in to do stuff real Americans don’t feel like doing. I don’t know about you, but singing, dancing, and risking my life to protect my country from women with huge bunny ears is something I certainly don’t feel like doing.

So keep up the good work, foreigners! Entertain me, and in your spare time, keep me safe from other foreigners. Just don’t go looking for any rights or citizenship or anything. You can go back to your own crappy country if you’re looking for a free ride.

House of the Dead: Overkill

The game may have been made by British people (who are technically part American via reverse hereditary), but they still seem to understand what makes America great. The game rewards you for a maximum kill-streak with a mode called “Goregasm”, where your score multiplier goes through the roof and an American flags pops-up on screen to cheer you on. 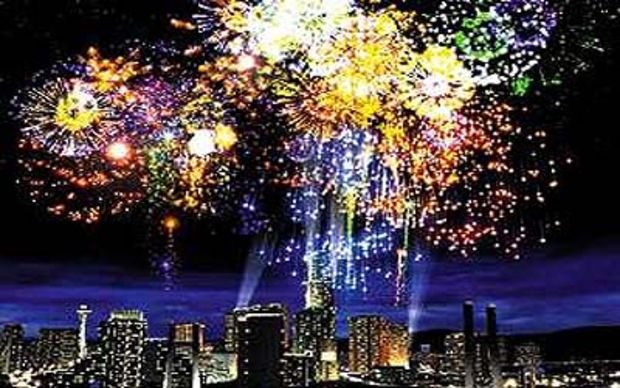 The Chinese may have created fireworks, but it was the Americans that first made them synonymous with something awesome — America. What other country has a national anthem that boldly pays tribute to “the rocket’s red glare” and “a bunch of bombs in the air?” I wouldn’t know, because I’ll never sully my ears by listening to the national anthem of another country. Why bother? Unless there is another country called “American 2: The New Batch”, then I aint interested; not in it’s burgers, it’s breast implants, or it’s theme songs.

Anyway, explosions are America. That’s why we celebrate our country’s birth by getting together in large groups and watching the sky flowers bloom. Purpose-free explosions = loud, gaudy, and dangerous = Fantavision = America. It’s just that simple.

Someday, I’ll see a fireworks show where each explosion takes the shape of giant fiery breast implant, Toby Kieth’s face, and a cartoon eagle with a little hat on. That will be the day that I’ll be ready to die, for I will have truly embraced America in all its glory.

[Yes, this was supposed to be satirical, and no, I’m not drunk.]