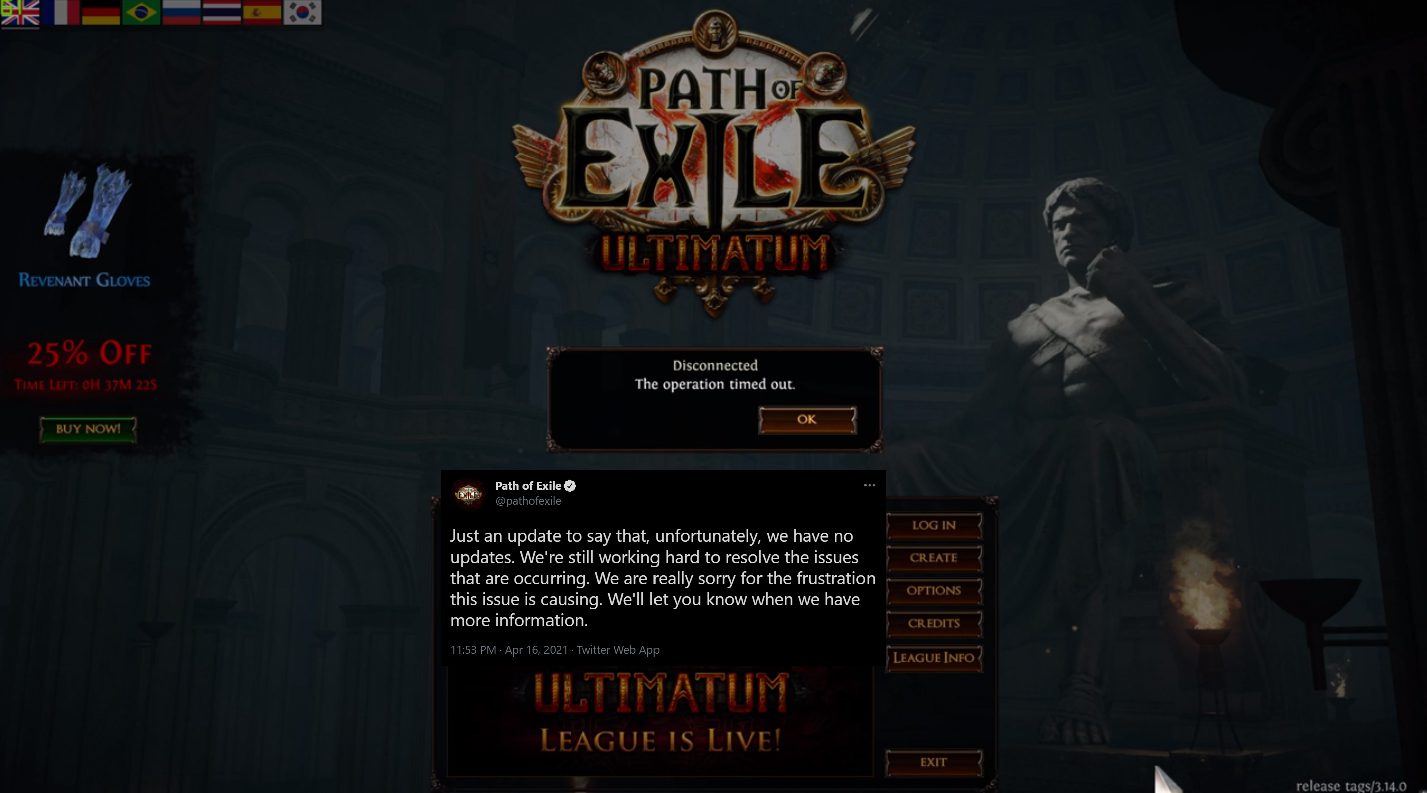 As any avid Path of Exile player can now tell you, yesterday sucked. We are used to some day-one server issues, as all online-only playerbases are, but holy cow was yesterday an absolute mess. After a very slow-moving player queue, Path of Exile finally let people in only to be disconnected five minutes later. Maybe this would have been more tolerable if it also didn’t come with rollbacks, essentially wiping the last 1-3 minutes of progress off the board.

I must have hit level 13 about four times before I eventually gave up for the day. The Path of Exile Twitter account recognized these issues, but provided little comfort to those anticipating a fix, even updating late at night (on the east coast of the US) simply to mention that they have no new information.

Eventually, the developers put up an official announcement detailing everything to the users. While they avoid getting too technical, they do a good job of explaining their moves behind the scenes that caused a lot of the issues. As of now, the servers seem to be running mostly fine, and the only real information they have mentioned is for other developers to “be careful with your database page sizes,” whatever that means!

The server stability issues appear to be fixed ðŸ¤ž To our fellow devs, be careful with your database page sizes. Thanks to the entire community for their patience today. This was a rough one.

We hope you enjoy Ultimatum!

There has been another issue compounding this: certain streamers were given priority to skip the queue entirely and jump straight into the game (when it was actually available). These streamers could not play if the servers were straight up borked, which they were quite often, but this unfairness certainly made a lot of community members upset.

Explained in the announcement, the developers had a paid advertisement with some streamers for two hours, so instead of wasting that money and having those streamers only show off a dwindling queue number, Grinding Gear Games decided to give priority to those streamers. They also gave it to other streamers not part of the marketing campaign. This caused community members to be furious at streamers (a silly thing) and some streamers to really dig themselves into a hole, as seen here.

They apologized for this issue and admitted it as a mistake in their post, while vowing never to do it again. Personally, I was fine with it, because the streamers are providing a service and I enjoy that service, so even being able to watch someone play the game provided some form of excitement. Plus, they were experiencing the same issues as everyone else, they just didn’t have to wait the like, two minutes that I had to wait in queue. I understand the arguments about some “teams” of players getting a head-start on the economy, but I am not at the level of player to really care about that, all things considered.

Bottom line is, now I can finally move on to Act 2 and will hopefully experience very few crashes and rollbacks.