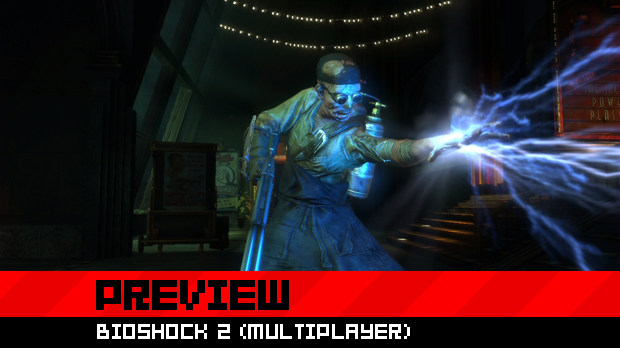 It’s 1959, a full year before the events of the original BioShock took place. A civil war has broken out over ADAM — Atlas and Andrew Ryan are fighting over the control of the precious resource. But that doesn’t matter to Sinclair Solutions, the company at the forefront of Plasmid development. So long as they have willing civilians that want to splice up, their business will continue to boom.

That’s the premise to BioShock 2’s multiplayer. It gives a nice little background on the events of what happened before you got to Rapture in the first game, but you’re not going to be playing the multiplayer for the narrative. You’re going to play so you can bash your friends’ heads in with a football trophy.

Hit the break to get the lowdown on some of the new multiplayer gametypes, new Plasmids, and more in BioShock 2’s multiplayer mode.

Before a match begins, you’ll first get to pick a citizen of Rapture to play as. There are several to choose from, each with some background on why they’re in the war. Once you’ve picked your character, you can choose what type of melee weapon they’ll use (football trophy, wrench, gulf club and more) and pick out their main weapon load-out. You’ll be able to create three weapon load-out profiles that you can pick from after every time you’ve been killed in a match. Each load-out can have two different Plasmid powers, two different guns and some Tonic abilities.

Most of the weapons and Plasmids you can equip are ones you’ve used in the original BioShock, but there are a few new killing tools you can make use of. On the guns side, there’s the new nail gun that acts like a chain gun. It takes a couple of seconds for the gun to charge up, but once it’s going, it’s a pretty deadly, fully automatic weapon. Three new Plasmid powers were also shown:

After you’re ready to engage in combat, it’s time to jump into one of the seven game modes. Only three were shown off during our play time: Survival of the Fittest (free-for-all), Civil War (team deathmatch) and Capture the Sister. 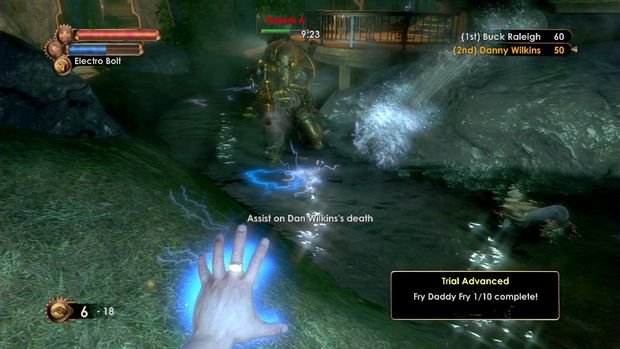 In Capture the Sister, a team defends a Little Sister, while the other team must capture her. Attacking Splicers need to grab the Sister and take her to a Little Sister Vent. When one of the attackers grabs the Sister, they can’t use their weapons, but they do still have full use of their Plasmid abilities. If the defenders manage to hurt the attacker carrying the Little Sister, she will be dropped on the spot, where she will stay until she’s grabbed again.

The Big Daddy plays some part in every game mode we got to see. In the free-for-all and team versus modes, a Big Daddy suit will randomly spawn on the map, and the first player that gets to it will become a Big Daddy. In Capture the Sister, someone on the defensive side automatically starts off as a Big Daddy. This Big Daddy is based on the Rosie model, which makes use of the Rivet gun and has a small supply of proximity mines. Players can also use the Big Daddy stomp to stun players for a bit and force invisible Splicers back into visibility.

All players have regenerative health in multiplayer, except the Big Daddy. Once the Big Daddy player is killed in Capture the Sister, the suit is gone until the next round starts. The Big Daddy suit will reappear after a certain amount of time in the other game modes.

There will be ten multiplayer maps, all of which are based on environments from the first BioShock. A lot of the maps are multi-storied, with lots of small corridors mixed in with some large open spaces. There are some environmental perks players can make use of, too, including hackable turrets (sans hacking mini-game) and EVE dispensers that players can rig a bomb to. That usually kills anyone trying to replenish their EVE. 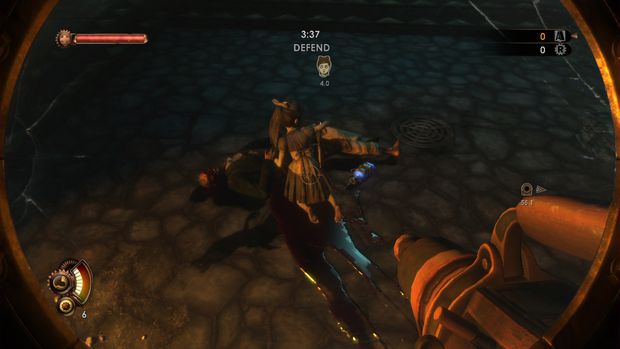 You’ll be able to play the multiplayer as you would any other multiplayer game, but it really pays to have a strategy. Combining certain weapons and Plasmids together is more effective than picking your arsenal at random. A good example would be to use Winter Blast with a shotgun. With that combo, you can slow your enemies down enough to give you time to run up to them and give them a face full of bullets.

After every match, all players (up to ten total can play in multiplayer) will be rewarded with ADAM. ADAM is the currency in multiplayer and can be used to upgrade guns, get new or stronger Plasmids and new tonics. The better you are in multiplayer, the more ADAM you’ll receive, and the faster you’ll be able to climb the ranks in Sinclair Solutions.

The multiplayer is fun, very fast-paced and pretty hectic. Overall, it’s a nice diversion from the single-player game. It will be interesting to see how long the multiplayer stands up after the game is released — I feel it could get stale pretty fast. We’ll find out for sure once BioShock 2 is released next year.