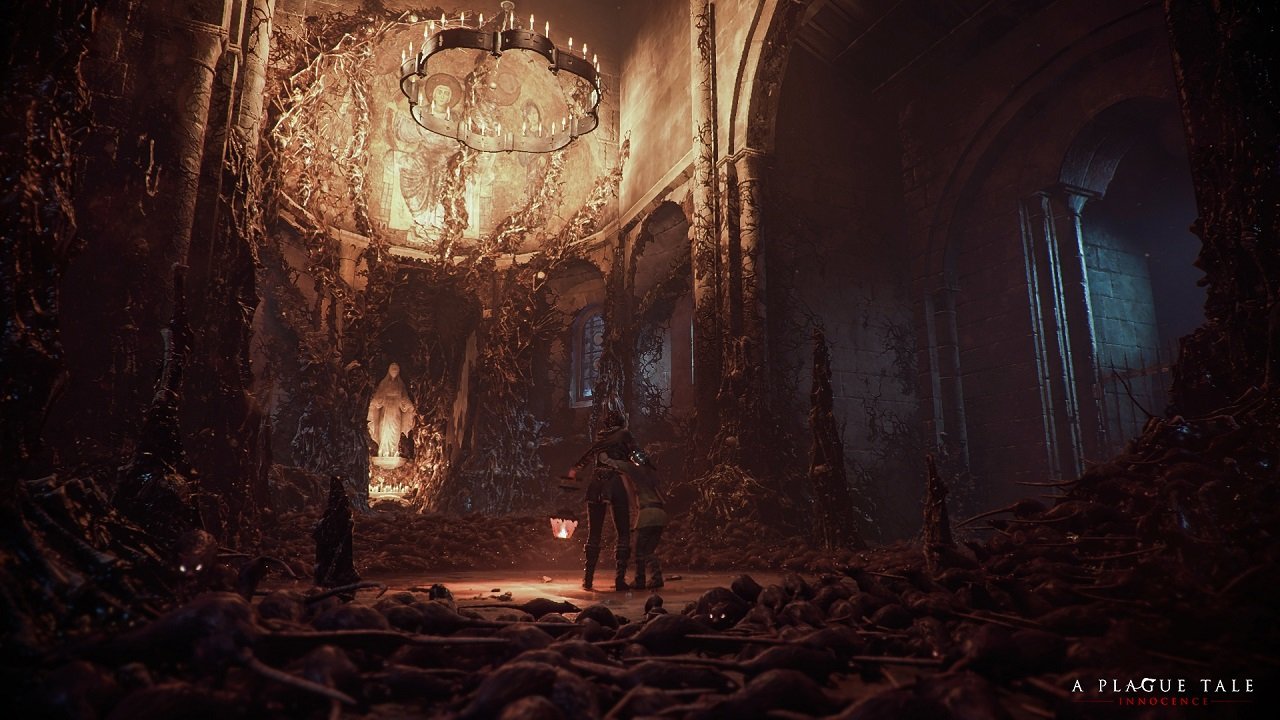 Try not to get bit

The first three chapters of A Plague Tale: Innocence paint a harrowing picture. Its vision of a 14th-century France is full of violence and death.  The Hundred Years’ War and the Inquisition’s looming shadow stand poised to unspool a world that’s nearly coming undone. But worse than the dead bodies and blood in the streets are the rats. In A Plague Tale, there are so, so many rats. And they’re all so, so hungry.

A Plague Tale, at least based off its opening hours, is just that: a story about survival during a plague of Biblical proportions. Amicia De Rune and her sickly younger brother Hugo find themselves alone, in danger, and desperately clinging to one another for safety after a raid on their family estate. As the elder De Rune, players have to navigate through plague-ravaged towns and sunken crypts in an ongoing search for shelter, all with the shellshocked Hugo in tow. It’s a tough job—and on paper, a game built around a perpetual escort mission might even be a tough sell—but A Plague Tale hits hard and often. The game’s early chapters have enough shocks and stress-inducing sequences to keep the pace rushing forward. And, of course, it has rats. You really shouldn’t forget about the rats.

Amicia and Hugo hardly know one another by the time A Plague Tale kicks off. Hugo, mysteriously ill since birth, has spent most of his young life under his mother’s watchful care. Amicia is his opposite; she’s athletic, hardy, and keen to follow her father’s footsteps and become a knight. But despite their differences, the De Rune children are instantly bonded by the game’s grim opening. Blood is thicker than water, and in times of tragedy, family means everything.

In keeping with that thematic sentiment, Amicia and Hugo spend most of their time near one another. Although Amicia is the game’s playable character, she and Hugo are almost always holding hands. Amicia leads and Hugo follows. Players guide one De Rune, who in turn guides the other. If it all goes well, the siblings should make it to safety. 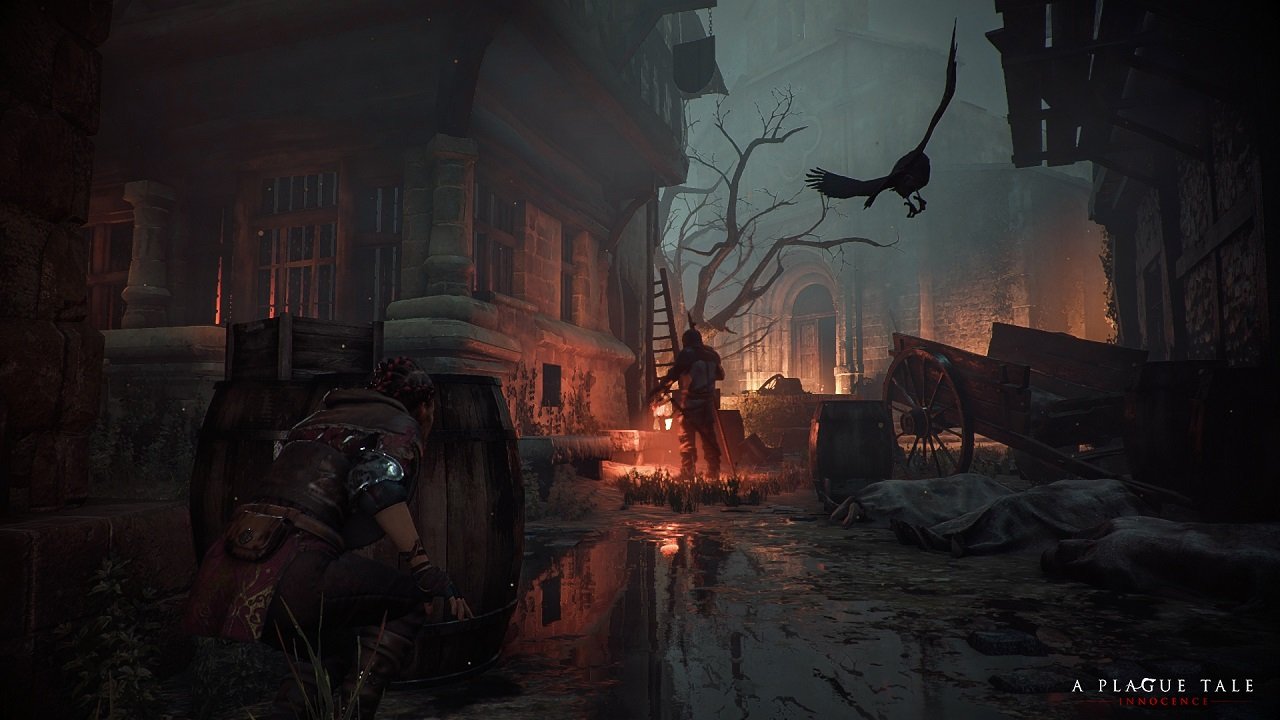 Progressing through the game means weaving from stealth sections to puzzle rooms in various locations. Amicia and Hugo spent a portion of the first three chapters escaping rogues and creeping through rundown villages before entering the rotten underbelly of a church. The stealth, at least early on, isn’t too taxing. Amicia’s brave, but she’s not stupid; it’s better to stick to the shadows and use her slingshot to lob rocks and distract foes instead of tackling enemies head-on.  Formal combat exists—there is one boss fight in the preview build—but it’s used sparingly, almost as an exclamation point to punctuate narrative buildup.

But it’s the rats that steal the show. They’re an oppressive, pervasive force. Like the De Runes, the rodents move as a unit. Unlike the children, thousands are swarming around in the dark, eager to devour anything in their path. A Plague Tale‘s rats scurry and stalk the De Runes from the darkness, glowing eyes and too-sharp teeth perpetually fixated on the children.

During the second half of the preview build, A Plague Tale‘s rodent armies became a constant concern. They carry death and disease and are perhaps a harbinger of something even more dangerous. Amicia and Hugo don’t stand a chance against the pulsing mob of rats, and their presence functions as a moving, teeming puzzle. The rats spill out from the darkness and are only repelled by bright light sources—torches and direct sunlight seem to work best. 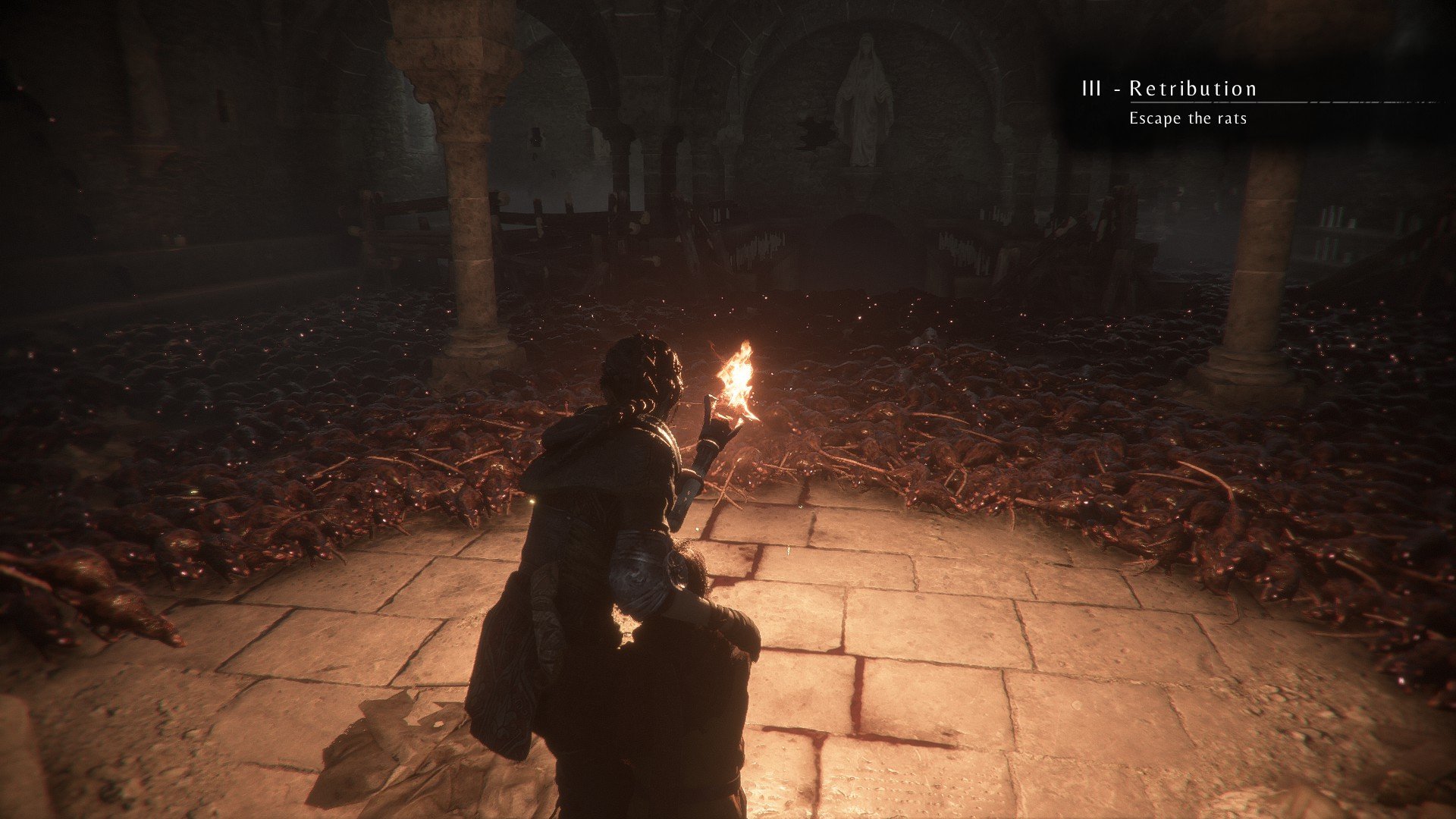 And so, a significant portion of A Plague Tale seems to revolve around keeping thousands of onscreen rats at bay. Amicia progresses through the rat-infested areas cautiously, a torch in one hand and Hugo in the other. Every step forward with a light source causes the rodents to skitter backward, creating sequences where players cut paths through rat swarms like a reverse Pied Piper. Some sections require creative problem solving to carry fire over long distances. Amicia’s slingshot is incredibly useful for toppling chandeliers and coal-burning braziers while Hugo can fit into small crevices to access areas his big sister can’t. Escaping from the rodents feels like an accomplishment due to the horde’s seemingly dynamic AI. The rats move and react fluidly, like a disease-infested wave. Parting their numbers is intense.

With around two months before A Plague Tale launches, it’s interesting to see how the game plays with expectations. It pushes and pulls in different directions. Amicia and Hugo’s developing relationship carries weight, while the rat plague feels like a character unto itself. Across the opening chapters, numerous narrative beats hint at a larger plot that blends real-world history with fantastic events. The De Runes have their work cut out for them, but something tells me seeing their journey through to the end will be well worth it.