You had me at the promise of Glam Metal pugs

I’m going to start this preview by opening up a little; I’m going to admit that I have no nostalgic memories of point-and-click adventure gaming, nor is it a genre that I’m well-acquainted with. I grew up playing console titles, with the likes of Super Mario Bros., Spyro the Dragon, and Ratchet and Clank making up the majority of my childhood gaming memories.

Why am I opening this preview in such a way? It’s simple. I nearly made the stupid mistake of overlooking Paradigm, a Kickstarter-funded adventure game by Australian artist Jacob Janerka. In fact, I only got around to trying it out at PAX Australia at the recommendation of one of this site’s readers.

When I first checked out the PAX booth for Paradigm, I noticed a few things that caught my attention. For starters, I was informed that the developer cited shows such as The Mighty Boosh as a reference point for the game’s humour. Not only that, but there were promises of pugs that form cults dedicated to the wonders of Glam Metal.

Despite my usual apathy to the point-and-click genre, I just had to try it out.

The demo for Paradigm begins with a trailer by the in-game corporation DUPA Genetics, a company that produces prodigal children for those with immense fortune. With DUPA, your child could be a scientist, a bodybuilder, a wizard or even a cat. Right off the bat, you’re introduced to the game’s surrealist and rather quirky sense of humour. 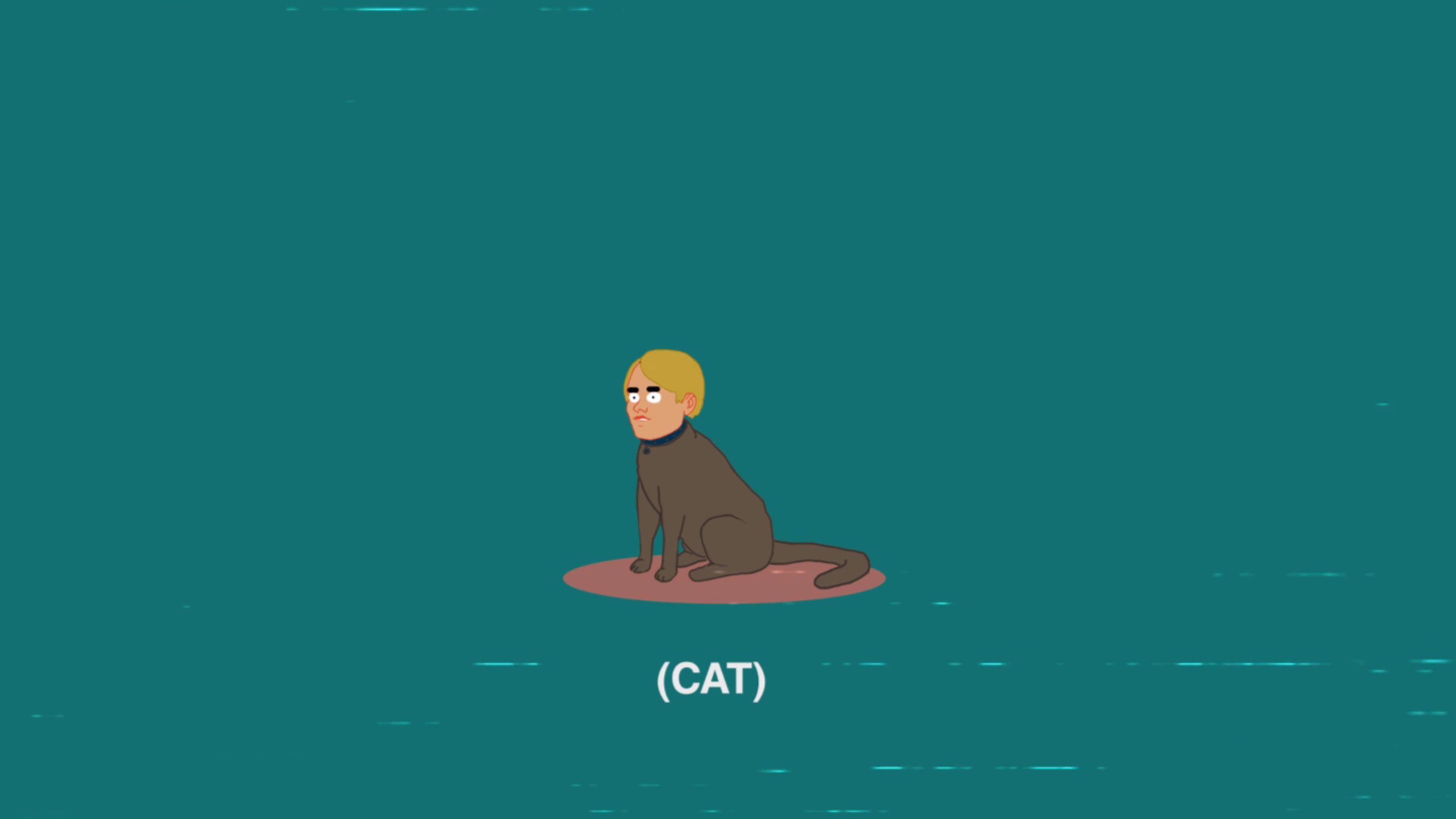 The game then cuts to the titular protagonist, Paradigm, a mutant who was the result of a failure in DUPA’s growing process and left to fend for himself after the company tried to wash its hands of him. Paradigm, a musician whose primary motivation is to produce his new EP, is soon informed that if he doesn’t fix the computer in the nuclear power plant for which he resides in soon, it will go into meltdown and cause untold destruction to everything within a 300-kilometre radius. While none of this is resolved in the demo, as it merely provides a setup for the story, it does work as a means to inform the player of the stakes in the full game.

Sadly, that’s it as far as the PAX Australia Paradigm demo goes. After a short cutscene which introduces the game’s primary antagonist – a sloth that vomits candy bars – Paradigm enters the second screen before addressing the player, thanking them for playing the demo.

The PAX Australia demo for Paradigm was relatively short, taking only five minutes to complete. In it, the game’s overall story takes a back seat. Instead, it focuses on giving the player a glimpse at the game’s art, humour and characters. I’d also highly recommend just playing around with some of the objects scattered around the environment simply because there are so many amusing oddities scattered around it. In fact, I wouldn’t be surprised if this was the developer’s intention. 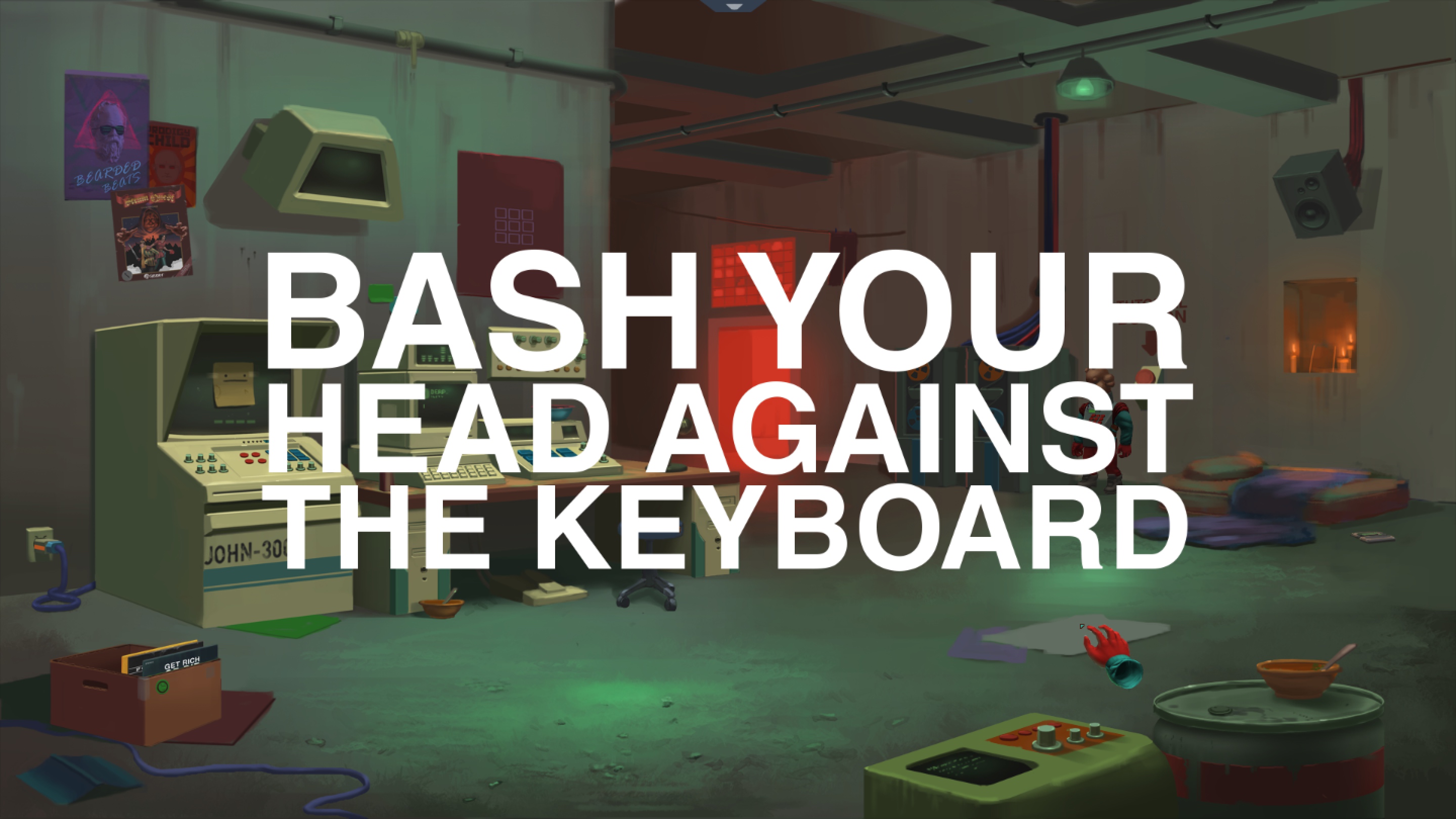 There is a free demo for both PC and MacOS on the official Paradigm website which offers an extended introduction to the game and its world. There’s an entire second screen to work through, with its own puzzles and additional story elements. It even introduces entirely new characters that weren’t found in the PAX demo.

Paradigm’s aesthetic resembles something that people from Eastern Europe in the 1970’s or 1980’s might have assumed a post-apocalyptic future to look like, and it does a good job of sticking to that design scheme. From the static-laden menus, to the boxy and monolithic computers, to the very concept of inserting a vinyl record into an incredibly Australian PC in order to help it maximise its sex appeal. Despite the absurd and somewhat outrageous content on offer in the demo, the game’s art manages to retain a highly consistent style, which helps make the world still feel slightly believable, if incredibly comical. Not to mention the level of detail in individual character portraits and environmental backgrounds.

Paradigm doesn’t do anything to reinvent the wheel, and it’s not the most innovative game ever. But that’s totally okay. It’s apparent that the developer has a high level of respect for the older PC point-and-click adventure games and, if my time with the demo for Paradigm is of any indication, has managed to produce something that should appease fans of the genre. That is, of course, provided they’re fond of the game’s bizarre sense of humour. 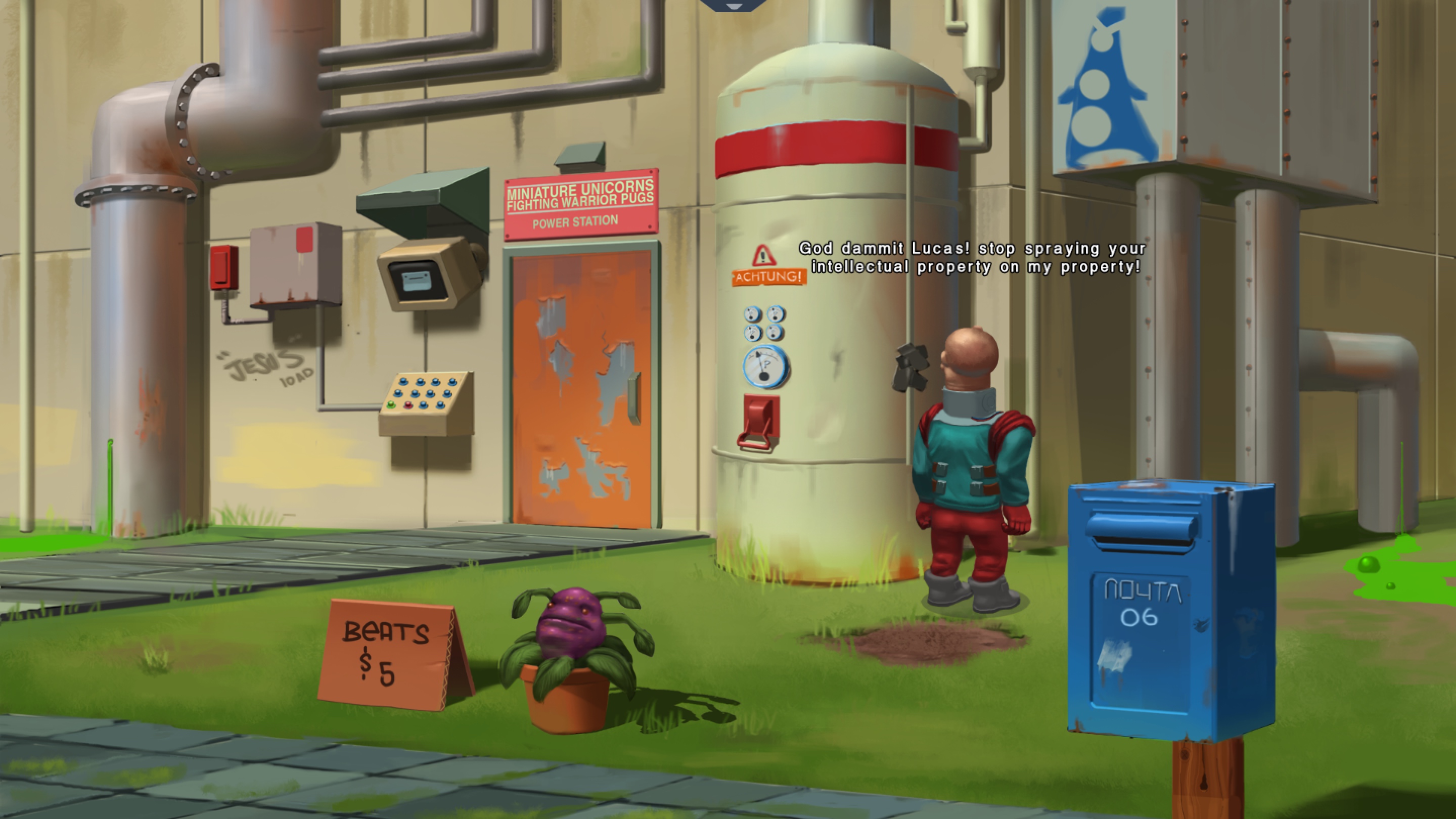 I do have a slight concern with the staying power of Paradigm in the long-run. After all, it would be very easy for the developer to insert whatever random and strange ideas that pop up in his head with little regard for world building and consistency. The demo managed to avoid this, making much of its weirdness feel natural to its world, but it is a concern that lays in the back of my mind none-the-less. There’s also the possibility of Paradigm falling into a trap that many point-and-click games do and wind up implementing puzzles that may be considered somewhat esoteric.

The closest thing to such a puzzle in the version of the Paradigm demo that’s available on the game’s website relates to the acquisition of a map, which is found within a series of babushka-doll-like mailboxes. Thankfully, anyone encountering any trouble with a puzzle can always communicate with the titular character’s tumour in order to receive a hint. As the game puts it, the tumour has both a vague intuition of most things and “slightly better than normal people wisdom.” Highlighting the tumour will also show what objects on the screen are interactable. As someone who doesn’t play too many games of this type, I have to admit that I ended up asking the tumour for help on more than one occasion. 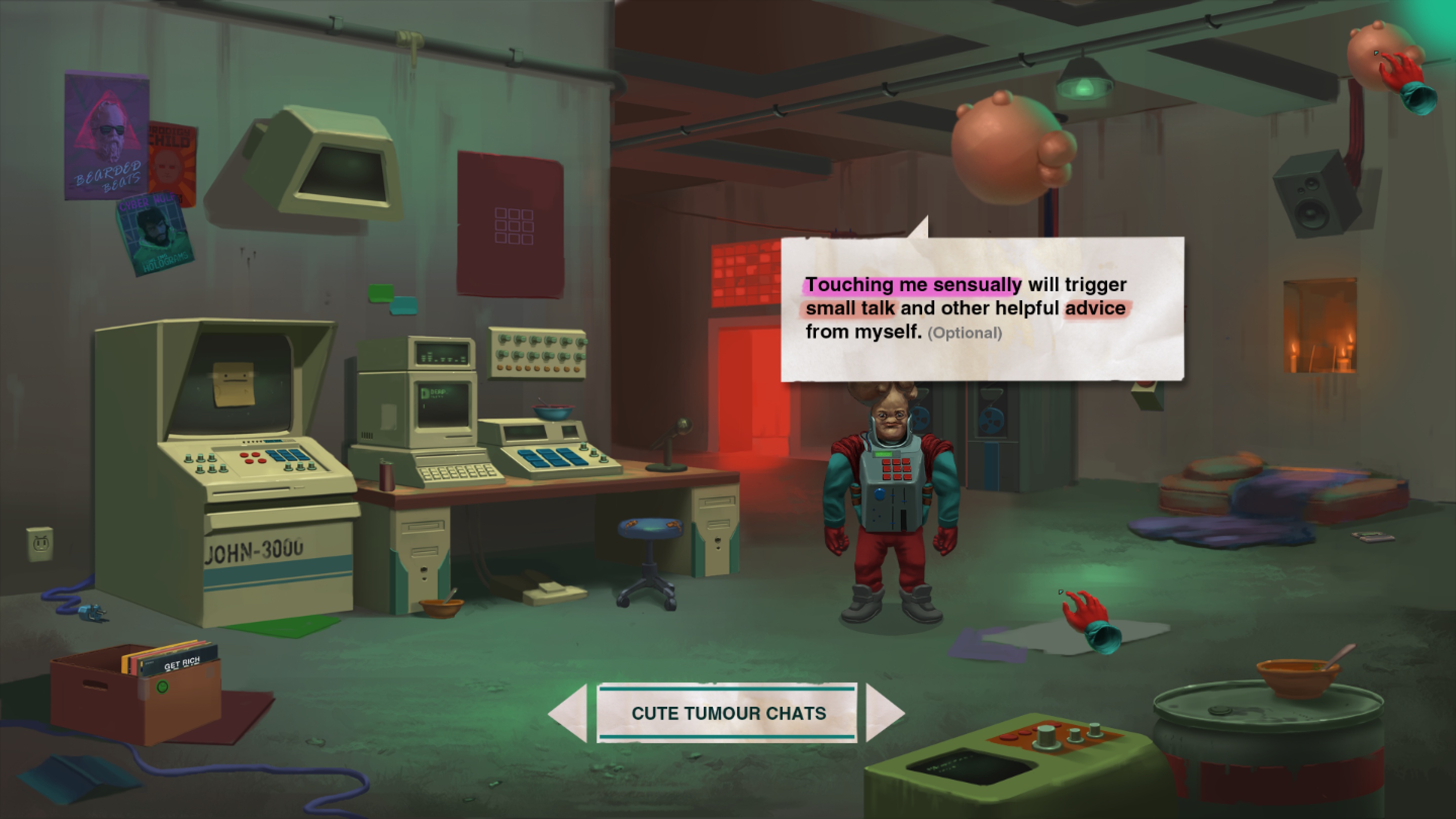 I also noticed a few minor grammatical errors during conversations in the demo, but I wouldn’t be surprised if they get ironed out before the full release.

The demo for Paradigm, despite being a little on the short side, managed to keep me thoroughly entertained. The gameplay and art were great, and I found the dialogue to be hilarious, even if it might not be for everyone. I do have a couple of minor nitpicks, but none of them were enough to really detract from my overall enjoyment of it. Even though the demo lacked any of the promised Glam Metal pugs. I really and truly hope that the final game can deliver the same level of quality.