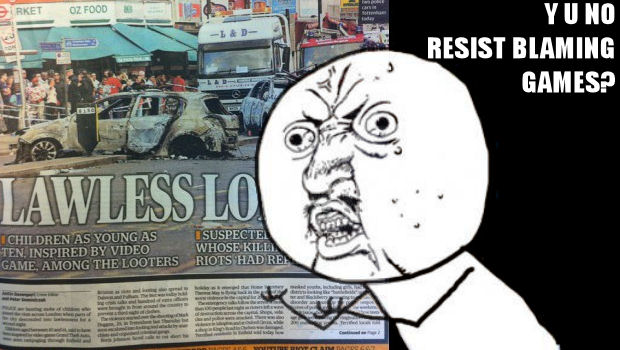 This past weekend, London was rocked by violent rioting following the fatal shooting by police of 29-year-old Mark Duggan. The scenes coming from Tottenham were particularly chilling, but The Evening Standard is on hand to bring reason to the madness by blaming games. Wait, what?

In its article, “Lawless London,” the paper says that children as young as ten were “inspired” by videogames to join the looters and burners in their violence.

“Children aged between 10 and 14, said to have been inspired by video game Grand Theft Auto,” claimed the paper, “were seen rampaging through Enfield and Brixton as riots and looting also spread to Dalston and Fulham.”

The Standard got this information from one single policeman and one resident of Enfield. No official link or evidence of the opinion was provided. Nice to see that the “real” journalists out there are pretending to not know how riots actually work in order to push another anti-game agenda.