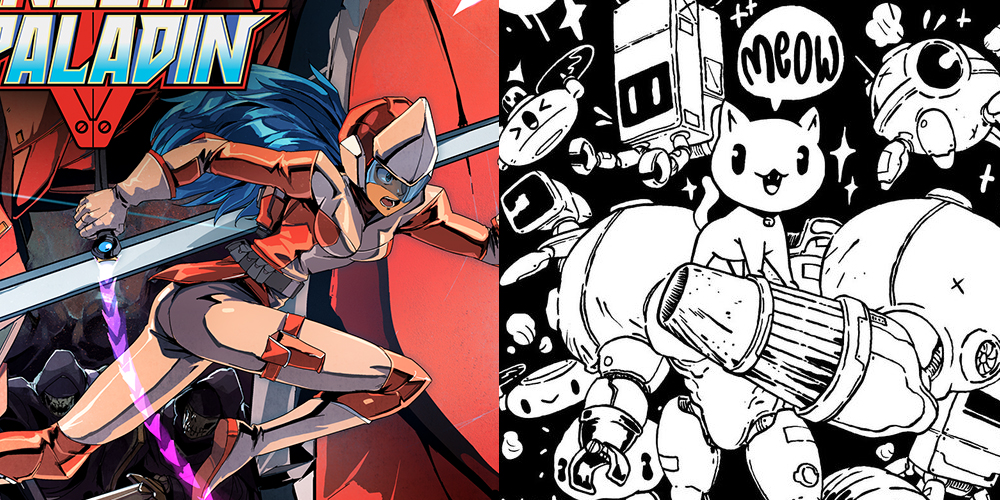 Time to whip out your protoculture

If reading the words “Titanfall-likes”made you frown, I hear you, but with the Titanfall series on indefinite hold, my guess is there are a lot of people out there who have a giant robot shaped hole in their videogame hopes and dreams right now. So while I could have led this post with something about “Blaster Master-likes” or “Metal Warriors-likes” or “Kirby Planet Robobot-likes”, that might have caused the sad Titanfall fans in the audience to pass this post by, which would have been a shame, because this post is just as much for them as anyone else.

It’s hard to say why trends in indie games happen. Unlike in the AAA space, where there are marketing think tanks and corporate psychologists engaging in competing analysis to see exactly what is likely to make the most money at any given moment, indies tend to work more from the bottom up. If they get excited enough about a game idea to see it through to completion, then it gets made. If they don’t, it doesn’t. It’s a lot more simple than the calculated AAA way, but it’s also a lot harder to predict which way the wind will blow.

For whatever reason, hopping in and out of mechs seem to be one of the ideas that has a lot of indies excited right now. There are the puppies in mechs in Explosionauts, a pilot who gets in a mech that gets in a mech in Death Chron, the giant 32-bit death metal mechs in Valfaris, the massive mech-on-mech action in Mind Seize, and the interesting new “mech as a step-stool” mechanic in this yet-unnamed game from T3nshi. This new wave of new mech-lead indies is being led by Gato Roboto and Panzer Paladin, the two most high profile titles in the trend. They both feel familiar but fresh at the same time, which is exactly the move you want to make in today’s intensely crowded market.

Panzer Paladin is due next Spring, which gives developer Tribute Games a fair amount of time to decide exactly how big and bold the game will be. From what I’ve played so far, they’re off to a great start. I’ve played a lot of mech games in my time, but I’ve never seen one that makes sword collecting its central premise before. That’s both the plot and one of the main gameplay hooks of Panzer Paladin.

Demons have invaded the world, and they are invulnerable to conventional weaponry. The only way to beat them is to fight fire with fire, or in this case, demon blades with demon blades. Tribute is planning on including around 100 different kinds of evil swords in all, so if you’re the type who liked collecting souls and other side arms in the various Igavanias over the years, this might be right up your alley.

While sword-fighting demons of various sizes makes up the bulk of the action, there are points in Panzer Paladin where you have to get out of your mech and swing like Bionic Commando in order to get ahead. Juxtaposing the bulky might of the mech against the movements of the light and nimble pilot is meant to make each stand out all the more. It also does a lot to make fans of Flinthook, Tribute’s most recent hit, feel seen. While the grappling in Panzer Paladin is more akin to Simon’s whip trip in Castlevania IV than Link’s hookshot, it still works as a little nod to both Tribute’s immediate past and classic gaming’s long history of hooking around.

Gato Roboto does even more to intensify the contrast between pilot and robot. In fact, I’d say “contrast” is the key word for summing up what Gato Roboto is all about. Visually, its black and white graphics scream simplicity, but also stand out with a particular confidence and brightness that you might not find in full color game. In fact, my attempts to take off-screen footage of the game at PAX East were soundly squashed, as my high quality camera couldn’t keep up with the intense brightness of the game. It looks great in person, but to the mechanical eye, it’s all a blur.

That may also be because of how fast the game is. While it’s clear that Metroid is a big influence on the game, there are few titles in that franchise that move quite as quickly as Gato Roboto. The mech is much heavier than Samus, making for a far less floaty jump. As for cat mode, it’s analogous to Samus’s morph ball except it’s much speedier at climbing walls and is, of course, much cuter. It can also wall jump, making for some more interesting platforming sections that Samus was usually privy to.

Likewise, the mech gets a missile expansion that also allows it to stay in mid-air after a jump for an extra second or two. From the looks of recently released footage, it also gets a dash-dodge, a submarine mode, and some sort of Sonic-style spinball maneuver. All in all, it seems like the devs are aware that the surface-level Metroid comparisons are coming, and they’re making sure that their game stand out when it comes down to the actual nuts and bolts under the hood.

Gato Roboto is tentatively set for release this year, while Panzer Paladin is scheduled for Spring 2020. Look for more on both games next month at E3.