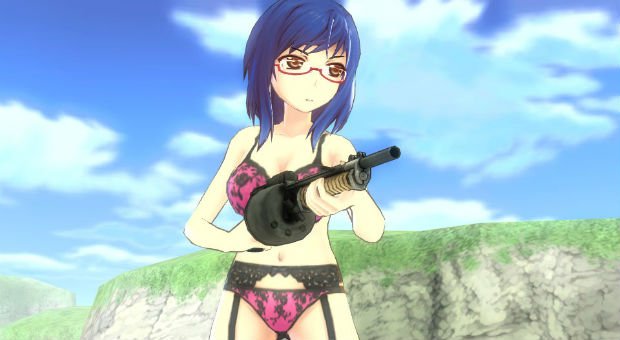 Additional details emerge about the power of the undergarment

In D3 Publisher and Shade’s upcoming action shooting game Bullet Girls, you’ll play as the girls of the Ranger Corps, training to become frontline soldiers for the military. Some of the training is a bit unorthodox, with a good deal of it centering around the girls just in their skivvies.

Instead of armor and helmets these girls pump their stats up with different undergarments, which have different stat effects such as HP boosts and attack ups and can be mixed and matched for over 1600 combinations. Also, prepare yourself for interrogation training, in which you’ll grope and place objects on the girls to build their tolerance for pain and torture.

These girls aren’t just all about underwear and pseudo-sexuality though. They pack heat. Each character can hold up to four different weapons at a time, from pistols to anti-tank rocket launchers. Players will be facing down foot soldiers, armored vehicles, and helicopters, so having the right weapon at the right time will be key. A fabulous weapon.

Bullet Girls will be released August 21, 2014 in Japan for PlayStation Vita, and you can also still pre-order the game for bonus undergarments. Because you can never have too many pairs of panties. Check out the latest Nico Nico video to see all of this glorious stuff in action.