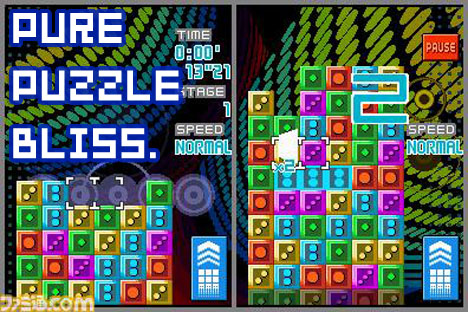 This week’s Famitsu had some interesting news: one more go-round for Panel de Pon. For those of you unfamiliar with the name, chances are you’ve taken a shot or two with the game; Pon is better known in America under wacky face-lift conversion aliases, like Tetris Attack on the SNES, Pokemon Puzzle League on the GBC and N64, and most recently the Gameboy Advance Dr. Mario / Puzzle League combo cart. It’s also one of the best puzzle games ever made.

Panel De Pon will be hitting Japan on the DS in April, so in the mean time, let us join hands and pray for the following: that it be Nintendo WFC-ready, that it be brought to America within a matter of months, and that it not be slapped with some other game’s aesthetic style just to make it palatable. I might be so bold as to presume that the orientation of the screenshots means the game will be oriented book-style, like Hotel Dusk: Rm 215 or Brain Age, and wouldn’t that just be dandy? We need more of them alternative orientation games.

Check the gallery for screenshots from Famitsu.