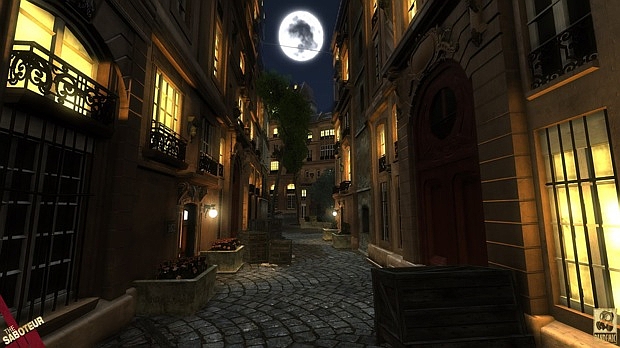 The Saboteur’s story takes place during World War II. It’s en vogue to call Pandemic Studio’s choice of time period mundane. There’s some merit to it: after all, we have explored this great confrontation in countless other titles. But just like the art design, Pandemic is twisting and tweaking, creating something better out of what we’re oh-so-familiar with. In a few words, the period is just inspiration.

“We wanted to use some historical events but not be too tied to dates so it wouldn’t keep us from telling the story and putting that in the foreground,” the game’s lead designer Thomas French told us via e-mail. “Being a sandbox game where the player and can play parts of the story at their leisure we didn’t want to have to have events happen at particular dates that would limit the player’s freedom.”

“We use things like zeppelins, over the top mission objectives, fictional weapons and Nazis, etc because we thought they would be fun and fit into the world we’ve made. We wanted to be able to exaggerate everything so we could go big and over the top.”

One thing — and probably the only thing — Pandemic had to scale down was Paris, the game’s hub and primary setting. The goal was to capture the “spirit” of the city, make it fun to navigate, and exaggerate the cool stuff.

“As for Paris, we really shot to capture the spirit of Paris,” French said. “All the monuments are there, it’s just smaller. This allowed us to really concentrate on the space to make sure all of it is first and foremost fun as well as have everything not look too repetitive in the world. Again, we exaggerated things like the occupation in the world or things the Nazis actually built in Paris — giant cannons, events at locations, etc. For us, bigger [equals] more awesome and more fun.”

It’s hard to explain how I felt while receiving my mini-tour of the game’s rendition of Paris. Watching the Zeppelins hovering above the horizon steadily grow larger as we passed Paris’ many landmarks was exciting. Seeing the game’s protagonist Sean climbing buildings, rolling up to an ancient countryside fortress in a supply truck were equally impressive. The exaggeration works.

“Like I said, we don’t even really think of our game as a WWII game, it’s the backdrop to our game which gives us arguably the best real world bad guys of all time,” French told us. “Our game is big, over the top, and filled with lots of high action. Mechanically we’re so different from those games too and the ‘kitchen sink’ of tools we have for the player make for something that’s even different in just the sandbox genre as well.  It’s also got a different world than people are used to seeing in this time period, full of grit, personal stories, and real characters.”

Alas, I never touched the controller during the demonstration of the game and therefore didn’t have the opportunity to explore myself. Still, The Saboteur is definitely a game to keep on your radar.