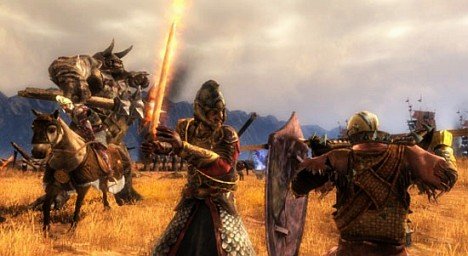 The rumors of Pandemic working on a new Lord of the Rings title have been confirmed today, and it’s definitely not the dead-on-arrival role-playing title, The White Council. Sticking with what they know best, Pandemic will deliver a large-scale battle title, Lord of the Rings: Conquest to Xbox 360, PlayStation 3, and PC later this year.

Think their popular Battlefront games, just with trolls, elves, and orcs, because that’s the direction they seem to be taking with Conquest. The game will span a number of the epic battlefields from the franchise, with raging battles that will feature up to 150 characters on-screen at once. Conquest will also sport a four-player cooperative campaign, either online or via split-screen, in addition to other online head-to-head modes (currenly planned for up to sixteen players).

Lord of the Rings: Conquest is scheduled for release this fall.

[Update: The original story incorrectly stated that the title would support up to eight players online. Pandemic has contacted us to say that they’re currently planning to support sixteen players, although that’s not set in stone. The story has been updated accordingly.]