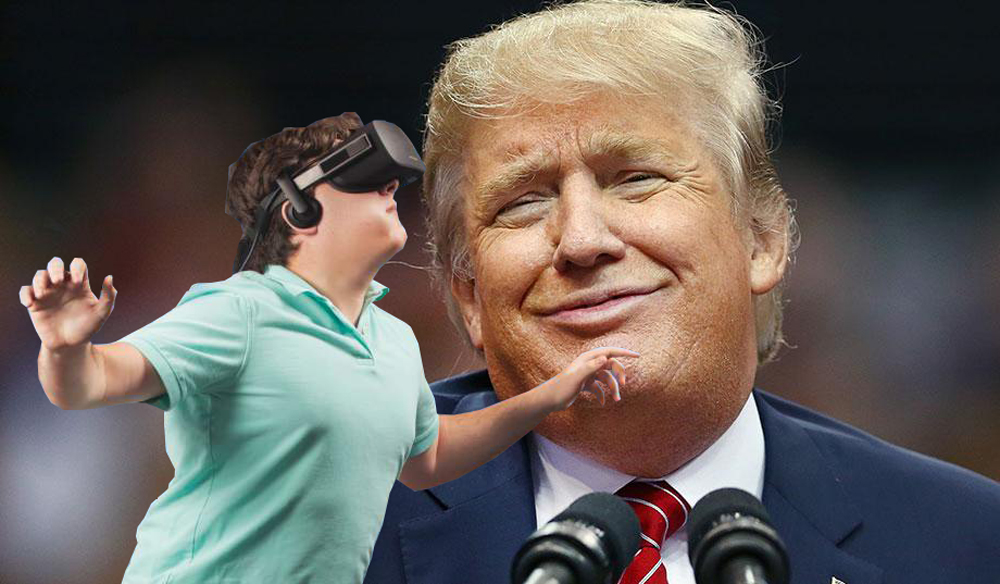 45 days until this shit is over

[Update: After several hours and no doubt several dozen articles on the internet, Palmer Luckey issued a statement on his Facebook page addressing his involvement with Nimble America.

I am deeply sorry that my actions are negatively impacting the perception of Oculus and its partners. The recent news stories about me do not accurately represent my views.

Here’s more background: I contributed $10,000 to Nimble America because I thought the organization had fresh ideas on how to communicate with young voters through the use of several billboards. I am a libertarian who has publicly supported Ron Paul and Gary Johnson in the past, and I plan on voting for Gary in this election as well.

I am committed to the principles of fair play and equal treatment. I did not write the “NimbleRichMan” posts, nor did I delete the account. Reports that I am a founder or employee of Nimble America are false. I don’t have any plans to donate beyond what I have already given to Nimble America.

Still, my actions were my own and do not represent Oculus. I’m sorry for the impact my actions are having on the community.

According to the original article, Palmer told The Daily Beast that he used the NimbleRichMan account on Reddit using a password that was given to him.

Here is where I sought that clarification from him and what he said. pic.twitter.com/pPfLKUX5Cg

.@PalmerLuckey Palmer, what you just wrote about NimbleRichMan isn’t true. Or you didn’t tell the truth in an email earlier this week. pic.twitter.com/cRSDFosrEM

In 2011, comedian and guy now most likely to lose his timeslot to an overweight, show tune singing Brit, Stephen Colbert wanted to prove just how fucked up the American political system had become in the wake of the Citizens United ruling. So he started Americans for a Better Tomorrow, Tomorrow, though you probably know it better as the Colbert Super PAC. For the next year, he dedicated his show to explaining just how easy it is for millionaires and billionaires to anonymously influence elections.

By the time he shut it down in 2012 due to the untimely death of Ham Rove, the Colbert Super PAC had raised more than one million dollars from thousands of anonymous donors, and also Emmy winner Bradley Whitford. A campaign commercial was created, most of the money was donated to charities and everyone realized just how ridiculous it would be to allow a seemingly endless amount of money to be funneled into American elections.

I’m just kidding. All that happened was Colbert won a Peabody.

Super PACs aren’t going anywhere and just about anyone can have one. Sarah Palin has one to buy all her books, Joss Whedon has one that just released a video where Iron Man and Black Widow promise to show us Bruce Banner’s dick if Trump loses, and apparently, young Bobby Moynihan look-alike Palmer Luckey has one as well.

In an extensive piece for The Daily Beast, writer’s Gideon Resnick and Ben Collins detailed Luckey’s involvement with the Nimble America Super PAC, a PAC dedicated to shitposting. Seriously. On the “The_Donald” subreddit page announcing the “social welfare 501(c)4 non-profit,” submitter TehDonald writes “We’ve proven that shitposting is powerful and meme magic is real. So many of you have asked us, how we can bring this to real life. We wanted to do it in a way that was transparent and had purpose. Not just sell t-shirts to sell them, but to sell t-shirts to shitpost.”

On the About page on Nimble America’s website, the three members of its team are listed under aliases. The Vice President of the group and “near billionaire” goes by the name NimbleRichMan, which The Daily Beast confirmed is the reddit username of Palmer Luckey. To any Trump supporters not convinced, the page says NimbleRichMan was extensively vetted by Breitbart Tech Editor and former Twitter user Milo Yiannopoulos, whom Luckey had met more than a year ago.

However, since the article went up (and before this article was posted), the Nimble America About page was updated. NimbleRichMan is no longer listed on the page, nor is the position of Vice-President. Good thing I took a screenshot.

Luckey insists he’s only the group’s money man, telling The Daily Beast “I’ve got plenty of money. Money is not my issue. I thought it sounded like a real jolly good time.” But there might be more to it than that. Over the weekend, Luckey posted as NimbleRichMan:

The American Revolution was funded by wealthy individuals. The same has been true of many movements for freedom in history. You can’t fight the American elite without serious firepower. They will outspend you and destroy you by any and all means.

Palmer also refers to Clinton as a “freedom-stripper,” which I’m only telling you so I can burn the words “Clinton” and “stripper” into your brain.

So far, it’s unclear just exactly how much money the Super PAC has raised. What money it does have has already been put towards a recently erected billboard outside of Pittsburgh. I apologize to anyone who has to rush to the hospital with a serious case of the side splits after seeing it.

Apparently, the aim is to put these in the areas around the Presidential debates, so we all have that to look forward to, I guess.

None of this should be all that shocking. First of all, a rich person spending money to influence elections isn’t a rarity, it’s the norm. Second, is anyone really surprised that political discourse in this country has devolved into just pasting memes on billboards? At this point, I’m sure the final debate between awkward Between Two Ferns’ guest Clinton and terrible SNL host Trump will just be a Spider-Man thread.

That’s enough politics for today. Back to your regularly scheduled video games.