Imitation is said to be the ultimate form of flattery. So when it comes to the pixel-perfect landscapes, from timeless gaming classics such as Super Mario Bros. and Chrono Trigger, it’s no wonder that copious amounts of artistically-inclined fans jump to re-create their favorite 8-bit icons bit for bit.

Some choose to indulge with craft by way of Pacman keychains and Space Invader bento boxes, while a handful attempt to use the “finer arts” for expression by painting zoomed-in pixelated scenes on canvas. As much as I respect the efforts to be creatively inspired by games, I think it’s a little pointless to repaint a pixel scene and consider yourself an “artist” when I could just as easily bust out my Photoshops, dust off that plot-printer in the garage, and essentially get  the same result. It’s really not that hard to do.

This is why 28-year old Jeremiah Palecek, a self-proclaimed “nerd-artist” who was recently interviewed about his work in the illustrious design magazine Print, manages to avoid the latter through paintings that re-create retro arcade scenes with a distinct emphasis on displacement, remediation, and contemplation. To catch of a glimpse of paintings inspired by everything from Counter Strike to The Adventures of Bayou Billy, hit the jump for a few of Palecek’s unique paintings along with excerpts from Print‘s interview.

Stripped away from darkened arcade parlors and brilliantly colored cabinet screens, Palecek translates the aura of the 8-bit experience onto canvas with a unique degree of sensibility and nostalgia. Muted oil paints convey what appears to resemble a pixel mirage in many of his works, transforming seemingly mundane screenshots from games like 1942 and Advanced Dungeons & Dragons: Hillsfar into images that resonate with human memory and touch. Palecek explains to Print in regards to his technique that ” … paint is sexy … It has an actual feel to it, something that is lacking in an age of mass production. Transferring a previously electronic medium into paint changes the way people think about it.” 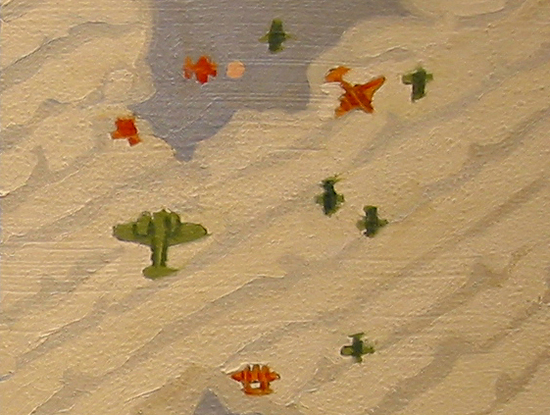 It’s clear that Palecek truly wants to encourage viewers to take a second look at the artistic instances in games through his paintings, claiming to Print that he ” … thinks it’s more important to freeze the digital images we see in our everyday lives, and meditate on what they mean … The computer screen has replaced the landscape.” In Palecek’s recent installation for Prague’s Proces symposium, Palecek recreated a teenage boys room fully equipped with game posters and a TV hooked up to play Super Mario Bros. to encapsulate where his artistic imagery was born. The digital panorama has deeply made its way into our collective memories of the past, and Palecek’s work seeks to bring that to attention. 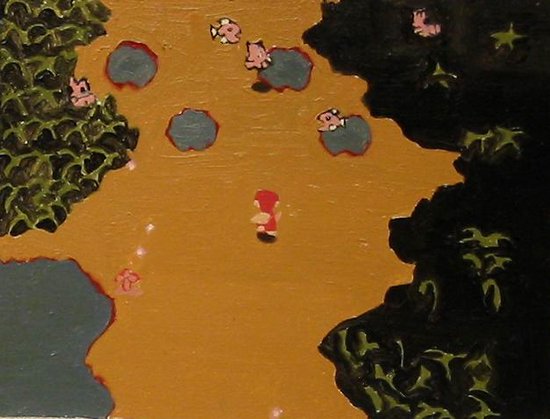 While Palecek lacks the more formal attention of art critics and collectors, he’s developed a relatively savvy fan base from displaying his work on his Web site alone, even gaining hip interweb cred from sites like BoingBoing. In addition to making bank with his paintings by selling them on eBay and Etsy for up to $150 clams, Palecek keeps his site Nerdarts stocked with Internet treats for geeks of all shapes and sizes. 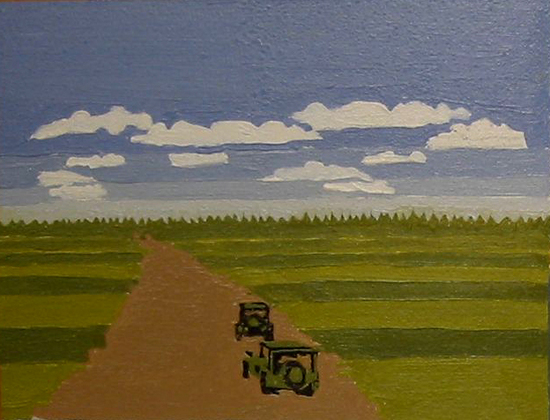 We all know that there is a rather frustrating line that has been culturally established to try and separate games from art. Do you think Palecek’s work manages to elevate the kitsch of 8-bit art into a higher realm of art, or is he just another one of those 8-bit painters that sells his stuff on Etsy?