But that won’t stop consoles from selling big

[Update: Keighley has produced another slide in which Pachter predicts that “Durango” will be the generation leader because it has a TV tuner and Skype. Also, there will be no more publisher bankruptcies. Yeah, fat chance.]

Wedbush Securities analyst Michael Pachter most definitely has sweet side, but it’s his sour side that’s so much fun to talk about. The latest stop in his carnival of flavors is SXSW 2013 in Austin, Texas, where he made the oft-repeated prediction that this latest round of home consoles will be the last we ever see. Of course, he said the exact same thing about this past generation, but I’m sure his number is bound to come up eventually. 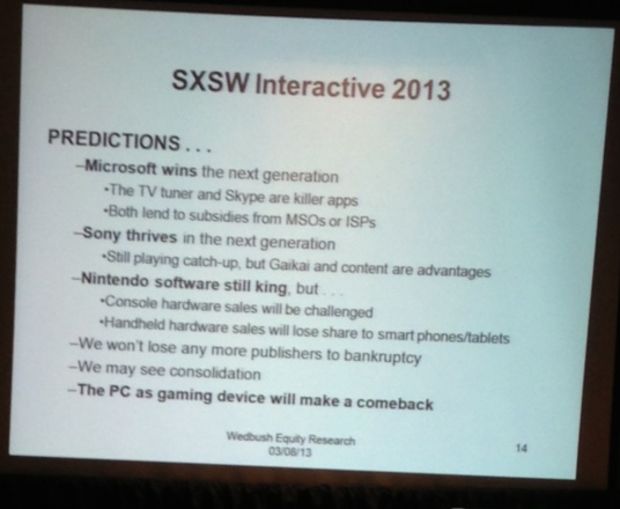 GT.TV‘s Geoff Keighley was in attendance, snapping photos of Pachter’s PowerPoint presentation and uploading them to Twitter. In addition to claiming that PS4 and Xbox “Durango” games will likely retail for $70, despite what Sony Computer Entertainment America CEO Jack Tretton insists otherwise, Pachter also offers his thoughts on the quality of tech. Clearly, Wii U is nothing more than a DS split in half and offers no significant potential for software innovation, while the PS4’s large RAM pool means games on that machine will probably be super innovative.

Even though console gaming’s days are numbered, total hardware sales will remain steady. The Wii U is projected to only hit 30-50 million, down from Wii’s roughly 100 million. Based on all its innovative RAM, PS4 will achieve 85-95 million, up from PS3’s 73 million. And we know absolutely nothing about “Durango” — it’ll have a TV tuner maybe? — so of course that ensures another 85-95 million, up from 360’s 75 million.

If that’s the future of this market sector, it’s totally obvious why all the major console manufacturers will jump ship. Those numbers sound terri-bad! Where would we be without your awe-inspiring insight, Mr. Pach?