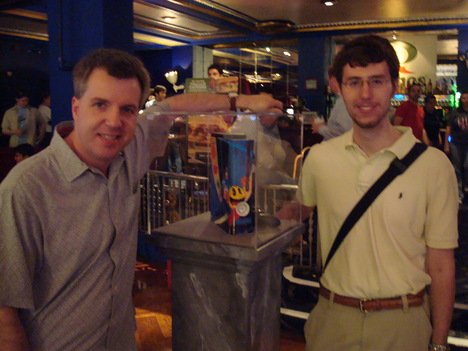 So, with the Pac-Man World Championship now over, it’s time for me to take a look back at what’s gone on today. The event was host to all different sorts of people — gamers representing seven different regions, major people in the video game industry, and the press.

The players at the event were all really interesting people, actually. If you’d care to, please follow me after the jump for the layout of everyone who was there and what the hell they do. Sadly, Jim Sterling was not there, so I can’t tell you who he is.

So first, let’s tackle the players — there were ten in all, representing seven different regions. They were:

You can check out the competitors in the gallery. Billy Mitchell is a famous one amongst the group, as he’s the first man to get a perfect score in Pac-Man. Apparently, in order to do that, you have to eat all the ghosts whenever you get a power up, and get every piece of fruit in the level for all 256 levels. Tim Balderramos was another perfect game player that got into the competition.

Also running around was Larry Hryb (Major Nelson) and Jeff Bell, the VP of Marketing for their Interactive Entertainment division. There was a ton of press there — especially from Japan. Naturally, they were there to cover the announcement by Microsoft and Toru Iwatani, the creator of Pac-Man. Also present was Makoto Iwai, the COO of Bandai-Namco and Correy Honza, the Director of Internet Marketing for Quiznos.

You can check out most of the people in the gallery below, as we head into the next part: the tournament itself.