Too smart for its own good, but still a winner

Living in the Dtoid house with Niero, Jon Carnage, and Tara Long, with daily visits from Max Scoville, was one of the most fun times of my life. We were all such different personalities, all united under a common love of video games. Out of everyone in the place, Carnage and I were probably the oddest couple. He would passionately explain to me that Heavy Rain and Red Dead Redemption are the future of gaming almost every day. I was constantly talking to him about how Animal Crossing and Cave Story were all people needed in this world to be happy. We loved each other, but we drove each other crazy.

The one place where we came together was Pac-Man Championship Edition DX. I’d go to bed with the highest score in the house, and wake up to find he’d stayed up all night in order to take my crown. Part of the reason we bonded over the game came from our common history with the series. We both grew up with Pac-Man and knew the core tenants of the game’s design philosophy. What we didn’t know, at least at first, was how Pac-Man CE DX managed to expand on the most fun parts of the Pac-Man experience while cutting out most of the fat. Discovering those mechanics, and then using them to try to one-up each other, made for a perfect mix of camaraderie and competition.

Pac-Man CE 2 and Pac-Man CE 2 Plus 2P (the two games included on the Pac-Man CE 2 Plus collection, a Switch exclusive) both work to further expand on that theme, adding new mechanics, boss fights, and most importantly, two-player co-op. While Pac-Man CE DX is still my favorite Pac-Man game to date, you can bet I’ll be bringing my Switch to PAX East this year, for the sole purpose of playing with Carnage in between panels. The game is overly complicated at times, but it’s still neon-death, ghost-train-chomping Pac-Man, and that will be good enough for us.

Regardless of how many Pac-Man games you’ve played in the past, you’ll want to go through the tutorials for these two games right away, as many of the basic rules of the series have changed. If you’ve played Pac-Man CE DX, then you know that waking up random green mini-ghosts will cause them to line up behind a standard ghost, causing them to form a long and winding ghost train. That’s still true in Pac-Man CE 2 and CE 2 Plus 2P, but now, ghosts can’t eat you unless you bump into them or their train a few times. If you do, they’ll fly into the air, their train gets absorbed into their ghost bodies, and they hit the ground pissed off and ready to kill. Only then can they take your life.

If that sounds like some “Galaxy Mind” level expansion of the basic Pac-Man premise, then get ready to have your mind totally blown, as that’s just the start of how these two games work to evolve the classic Pac-Man formula. Fruit and Power pellets only appear after you’ve charged enough meter. There is now a break pedal so that you can stop Pac-Man from moving entirely. Some stages even have teleporters. Most off-putting of all is the fact that Pac-Man can’t eat just any blue and frightened ghost anymore. He can only eat the head of a ghost train or random sleeping mini-ghosts that are lying around motionless. Any attempt to chow down on a smaller, lesser part of the train will lead him to get wokka-wokka-wokk-blocked. 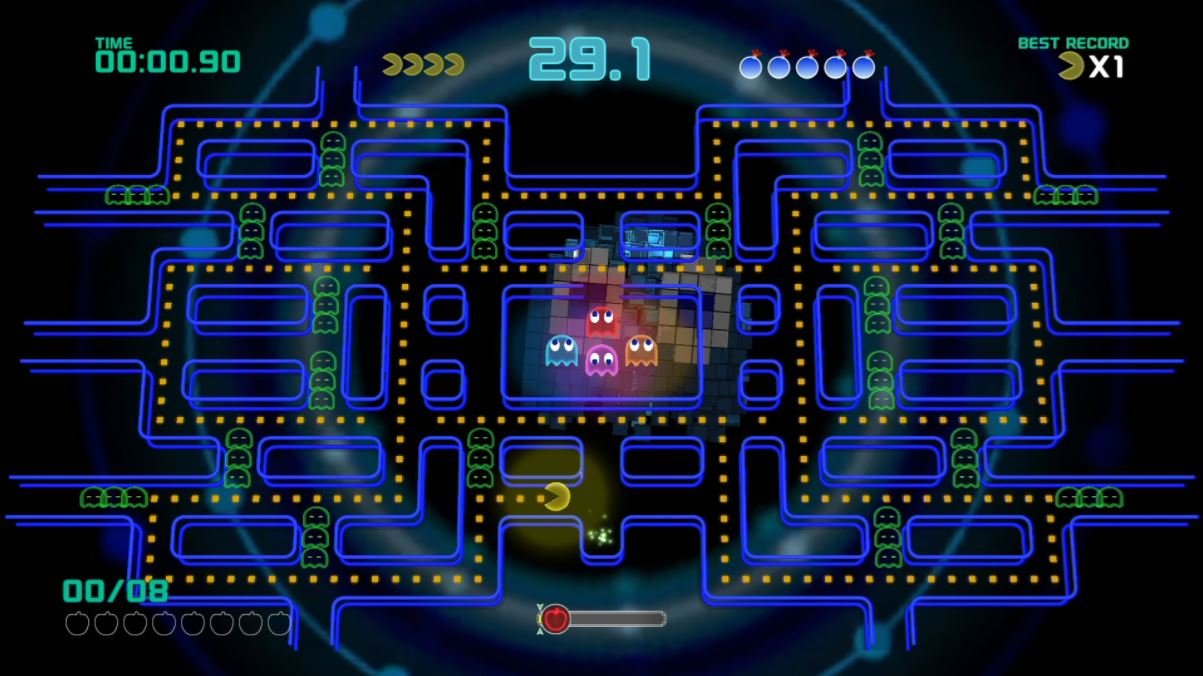 All of these changes feel like a deliberate attempt to be meta. The ghost trains chasing Pac-Man are really just a way for the devs to show the player exactly how far away from the ghosts they are all all times, a distance measured in mini-ghosts. Being aware of that distance has always been an important part of playing Pac-Man well, but now the need to be aware of it is explicitly spelled out for you. If you let a ghost get a little to close to you, it doesn’t kill you, as that would be too harsh of a punishment. Instead, it just causes a little bump to the whole train. Too many bumps, and the ghost really will kill you, because you are very sloppy and deserve to die.

Likewise, the fact that every part of the ghost train but the head is now invulnerable, even after you eat a power pellet, makes it so only those that really deserve the win will ever be able to devour their enemies. In basic Pac-Man, the smartest and most fun way to get all the ghosts is to corner them and snatch them head on, as they are unable to just turn around. Chasing a ghost from behind is OK too, but it can be a pretty mindless pursuit. In Pac-Man CE 2 and CE 2 Plus 2P, just chasing ghosts is almost never an option. If the ghost has a train, that train will get in the way, so you’ll have to corner them, which means that you’ll have to use strategy. 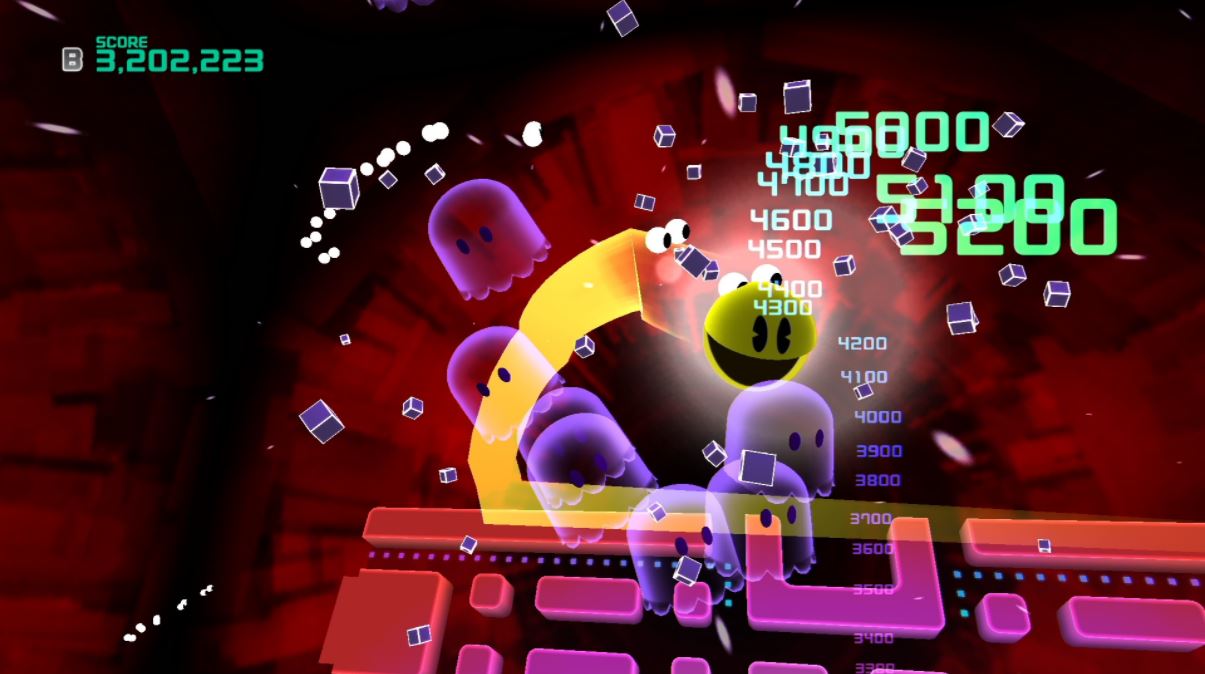 It all feels like the developers of Pac-Man CE 2 are trying to have a conversation with the player about what makes Pac-Man fun while they get to experience those design decisions firsthand at the same time. For a lot of my fellow Pac-Man nerds, that probably sounds great, but I’m sure a lot of people would rather the devs just shut up and let them eat some dang ghosts.

If that’s not enough high-concept Pac-Man hipster talk for you, then good news! The rules to Pac-Man CE Plus 2P are even weirder than the main game. In this Switch-exclusive spin-off, you can play with an A.I.-controlled bot or with a friend, but either way, co-op is not optional. The 2P A.I. Pac-Man is blue (maybe hinting at him being infused with ghost DNA?) and as such, they cannot be hurt by a ghost as long as they keep moving. 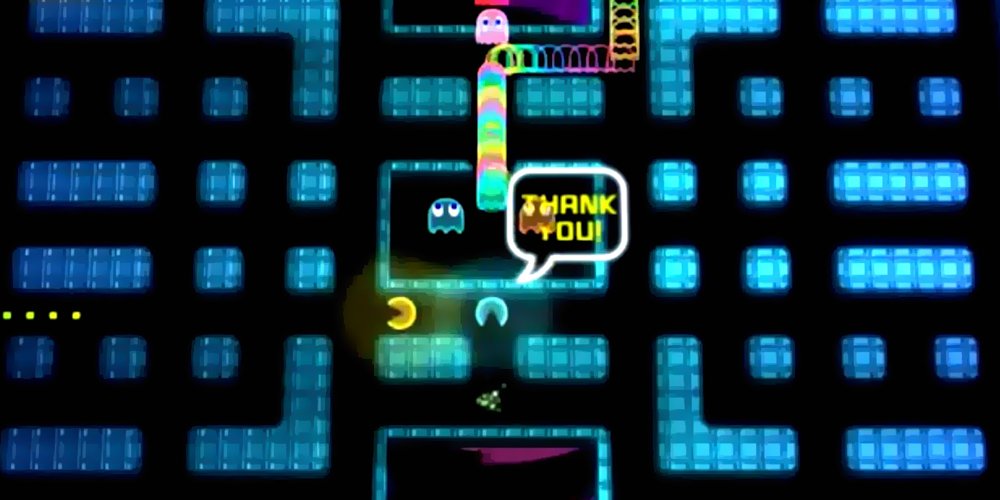 Still with me? Well hold on tight, because guess what, if another person is controlling this 2P blue Pac-Man the rules change yet again! This time, instead of being invulnerable, either Pac-Man can get caught and held down by a ghost, leaving the other player to come and rescue them with a bomb. After being saved, the Pac-Man in question will squeak out a little “Thank You,” which marks the first time I’ve heard Pac-Man talk since his sitcom-style Saturday morning cartoon from the ’80s.

Either way, Pac-Man is even harder to kill in Pac-Man CE 2 Plus 2P. The downside is, neither Pac-Man can eat Power Pellets or eat ghosts on their own. They’ll need to “accidentally” kiss while they eat, Lady and the Tramp-style, to pull off either gastronomic maneuver, though a solo Pac-Man can hold a ghost train in place while the other player heads over to help finish the meal. 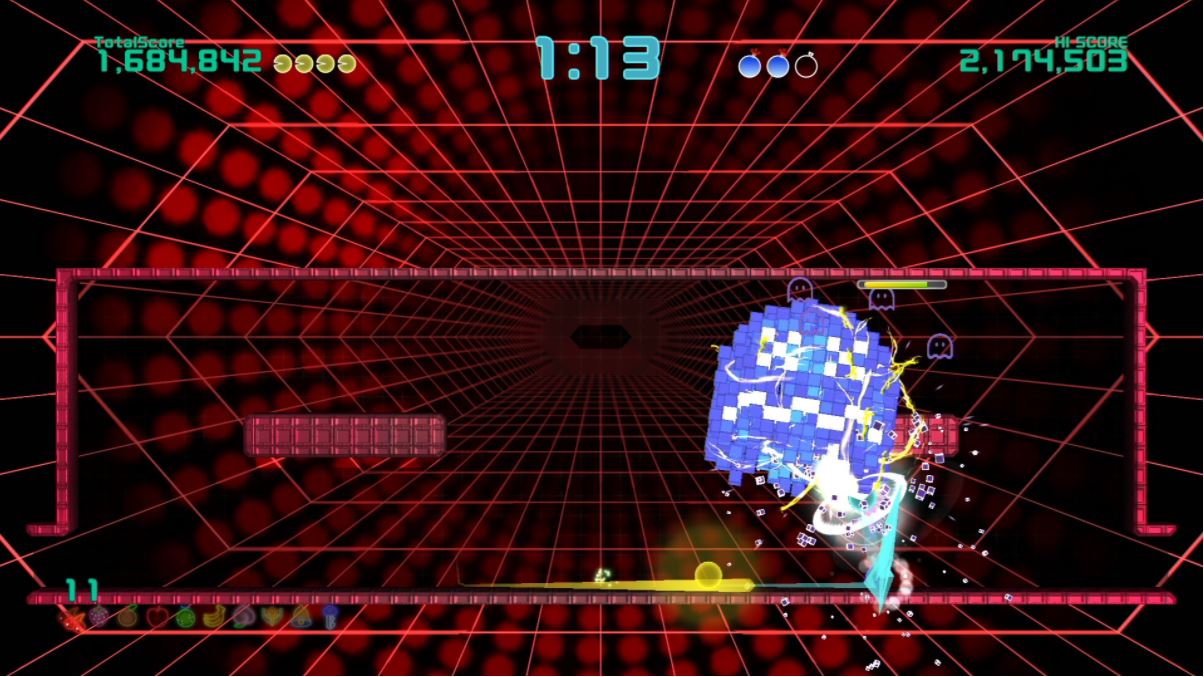 On top of that, the boss fights in Pac-Man CE 2 Plus 2P are also totally different. In Pac-Man CE 2, they are basically just regular maze-clearing levels with added hazards and extra lives, but in Pac-Man CE 2 Plus 2P, they turn the whole deal into an entirely new game. Instead of just running around a maze, you have a large open space to traverse, using the same kind of gravity-flipping platforming mechanics found in games like Dandara and VVVVVV. It’s sort of a mess, but it’s interesting enough, and it definitely feels violent. You’ve got to run around the screen with a pal, jumping for your life to get away from a big old ghost until you get a Power Pellet and bang into that sucker until it explodes.

It all adds up to an experience that gives you the best of what the Pac-Man series has to offer, along with some goofy anomalies that are fun in their own right. It’s a shame that the systems here aren’t more intuitive, but it will only take a fan of the previous Pac-Man CE games a few minutes to acclimate to the new rules. Once you do, Pac-Man CE 2 Plus is an intense, adrenaline-pumping ride, alone or with a friend.