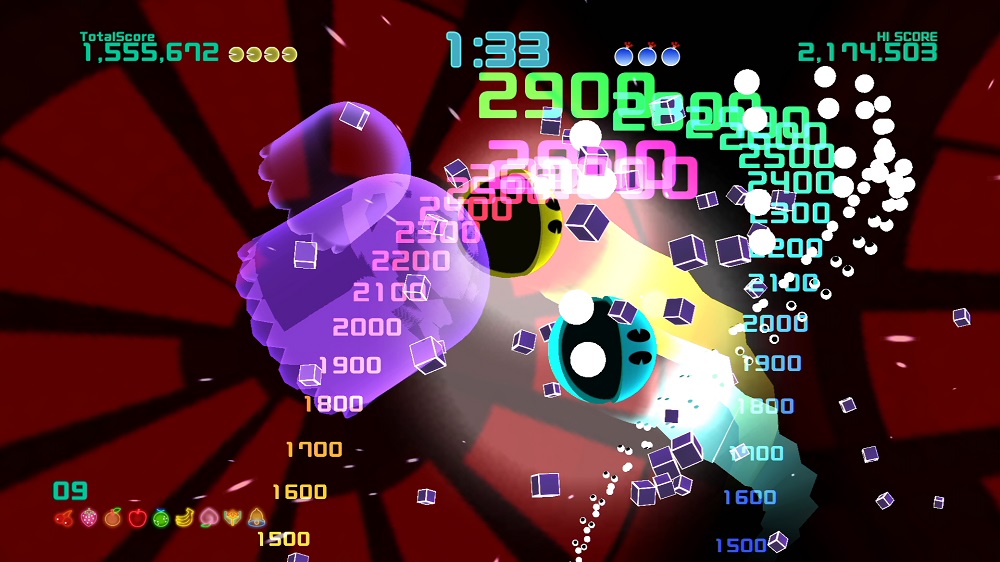 This weekend, at Bandai Namco’s LEVEL UP event in Paris, the studio revealed a Switch port of their neon-soaked, bass-heavy, arcade-action title Pac-Man Championship Edition 2 Plus.

Plus is a revamped edition of Pac-Man CE 2, itself is the sequel to one of last generation’s best games. The Switch port brings all of CE2’s screens, modes, music and features to Nintendo’s hybrid-console, but also includes an exclusive Co-Op mode. Two players take a Joy Con each to guide their respective Pac-Men (Pac-Mans?) through the mazes, greedily gobbling dots, ghosts and boss characters with reckless abandon.

As the pellet-trail naturally guides Pac-Man through each maze, Co-Op mode requires some adaptation on the two players behalf. Should one player divert, or be chased, from his or her given path, that one wrong turn could cost valuable time and points as both players improvise to get the greedy bastards back on track.

The expanding train of ghosts, which relentlessly chases our heroes through each labyrinth, can only be gobbled up if attacked at both ends simultaneously, which requires one player to head the ghoul train off at the pass, while the other tries to latch onto the tail, with both re-adjusting for the ghost’s unpredictable directions.

It’s surprisingly tricky. Due to the speed and score attack nature of the game, excellent chemistry is needed between the players, so that they are both able switch up their gameplan on the fly. Given the hazards that can screw up your perfectly-timed dash through the techno-laced levels, it takes solid communication and two heads, thinking as one, to guide Pac-Man to his gluttony glory.