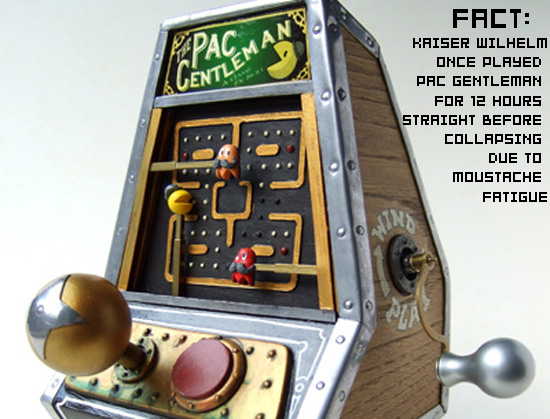 If there’s anything Boing Boing likes better than liberalism bordering on anarchism, and futuristic, fictional stories that actually reveal deep truths about the current state of the human condition, it’s steampunk anything, so obviously — other than Xeni — they’re going to get a woody at the appearance of the above piece of faux vintage gaming history, a genuine 1880 Pac Gentleman cabinet.

Everything about that thing screams “awesome.” It manages to blend alternate-reality 19th century chic with the now-vintage 1970s design aesthetic that has instilled itself permanently in popular culture thanks to Namco’s baby. On top of all that it comes replete with a description for the game that is easily on par with anything ever written on the subject of hypothetical, temporally-displaced gaming. Take a look:

When this game was first released in 1880 it was so hugely popular in taverns and inns that the bank of England was forced to mint more threepenny bits to keep up with demand. The game was created by Messrs. Nam & Nam and Co. as a novelty pastime for the masses. Outdoing the previous top public house game of Shove Ha’penny.

The cabinet, a work by BB dream date Doktor A, appeared in the recent Spit & Polish art show in Santa Cruz, and I think it goes without saying that I’m upset that none of our Californian readers managed to steal it for me. The third story of the Destructoid library is looking a little sparse, and if I don’t fill it with steampunk pseudo-automata, they’re going to want to hang girly posters and calendars filled with Mexican dudes and lowrider bikes.

[Side Note: Blehman managed to get a mention on the good Doktor’s LJ as a representative of Destructoid based on his being faster than I am at talking this sort of thing up. Proof that dreams come true!]