[Hello again everyone! After some chaos last week, Monthly Musing promotions have returned! Except, they’re not called Monthly Musings anymore. Welcome to Bloggers Wanted — something very similar to Monthly Musings, but not necessarily on the strict schedule of the past. Going forward, there may be multiple topics active at once that last for various periods of time. Expect to see some quick calls for blogs around E3, or perhaps a call for blogs related to a just-released game or major gaming event. Don’t worry though, the old Musing style topics will be sticking around, although they may become new topics every two weeks rather than for the entire month.

With that out of the way, have a look at Ali D’s P2 Press Start blog! He fondly reminisces (with retro-goggles, no doubt) about the times he and his friends would all sit together in front of a tiny CRT TV and shoot each other in Goldeneye, stab each other in Bushido Blade, and do other unspeakable things to each other in a number of other games. P2 Press Start blogs will continue to be promoted throughout the month (and on a more regular basis now), so if you haven’t written one yet there’s still plenty of time. — JRo]

If anything has been made clear by the recent PSN outage is how multiplayer gaming has changed since the advent of online gaming. Not that it’s anything new, people were playing online Quake back in the mid-90’s, but back in the day, your main multiplayer fix came from sitting in front of a TV with your mates.

During the 90s, I was pretty much without a games machine; my brother and I shared an NES towards the end of the 1980s and that was all I had until I bought a Dreamcast shortly after it’s launch and I bought my first PC after my first year at uni in 1999. That’s right; no SNES, Megadrive/Genesis, Saturn, N64 or PS1 for me. My gaming teenage gaming experiences came from going round to my friends houses and playing some multiplayer stuff, whether it was Nik with his PS1 (and his Atari Jaguar, but the less said about that the better) or Matt with his collection of consoles.

Our favourites varied, but Goldeneye was a particular favourite, despite the fact that I was absolute rubbish at it. We had specific rules, like no one could go Odd Job as he was smaller than the other characters and therefore (in our minds at least) harder to hit. Our friend Euan, who would just come up with the most random phrases, used to love the dual-wielded Klobb setup and running around shouting I’m gonna Klobb-inate ya!!”. I was rubbish at the game seemingly because I just didn’t play it enough as my friends (a precursor to most of my online FPS experiences); I remember one time Nik seeing where I had spawned and declared “I know exactly where you are, expect death in 3…. 2…. 1….” and proceeded to shoot me in the head. 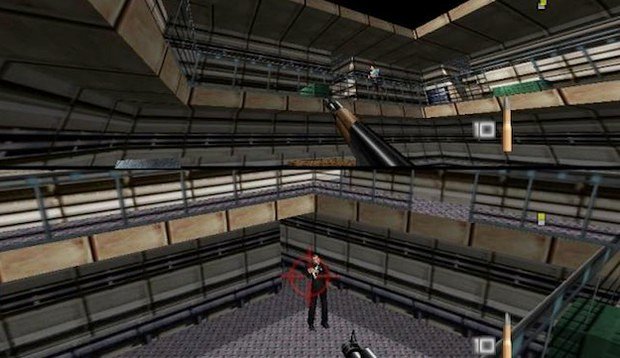 Me about to get headshotted again!

I think this was where my gaming inadequacy complex started to creep in; my friends would regularly beat my ass at every game we would play, no matter what. Now of course, lacking a console or copies of the games we would play, I’d have no chance to hone my skills, practice or do things like learn maps. I was always coming in blind to most games. It was only when we spent long summers playing the same titles over and over again, that I managed to come close to their level.

One such game was Bushido Blade, an under-rated 3D fighter that was unique in that it let players use a variety of weapons, stances and had fairly realistic levels of character damage. Wound a character’s arm in the game, and they could no longer use it in the battle. Stab a dude straight in the chest and that’s it he’s dead. But the game featured a rapid restart function, so although fights would be short and bloody, you could get straight back into combat. It got to the point where we were playing upwards of 300 matches in a session and we entered some quasi-shamanistic state. Both players staring at the screen, not moving, the wind in the game gently blowing as we both waited for us to be spiritually ready to strike. A swipe, a counter, a parry and a spurt of red. Restart. For hours on end. Looking back, I surprised that our parents actually let us sit in front of the TV for that long during the long summer days.

When we all left school, my friends moved to other cities to study at university, whilst I studied and worked part time, where I met a bunch of guys my age who were all big into videogames. By this point I’d gotten an X-Box, whereas my friends had gotten PS2s or Gamecubes, and despite playing more and more single player games on my PC, weekends usually found me at either Ross or Grant’s place playing a console game. Usually that would have meant me being absolutely pummeled at whatever was the game of choice at the time. However, now was the time of multiplatform titles that everyone could play, regardless of what console they had at home. And what did we play….? 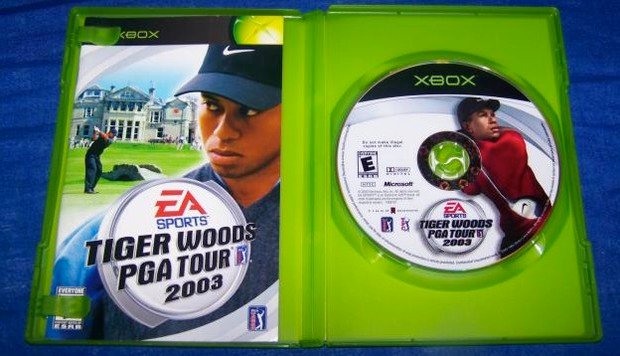 A lot, to the point where there were 4 of us in a small room, all playing as Tiger Woods and only having a single shot be the difference between the winner and runners up. Here, thankfully, I could play the game on my own and practice so I wasn’t the whipping boy all the time. This was probably the last great period of local multiplayer gaming that I’ve really had. It’s highlighted by two different by great experiences. The first was a Xbox party round at the flat Chris (aka Badger) had, one weekend where we got some extra TVs and played Halo via a cobbled together LAN. Lots of fun (we even took a break to see Rangers beat Motherwell in the Scottish Cup Final), some custom games were created, booze was consumed and it was lots of fun.

The other is a small snapshot of me and Nik, Grant and Craig playing the under-rated X-box launch title NHL Hitz, a no rules fun hockey game. What was great was that if allowed 2 v 2 multiplayer and since Craig had an Xbox too, he brought his controllers over and we would have some really close matches. The controls for the game were really simple enough for people to pick up after a few goes and it meant my friends were never outclassed at the game. My favourite match involved the four of us scoring 3 goals in the last thirty second of the game to win by a single goal. The countdown clock read 0.01 seconds when I scored the goal for me and Craig to win the game 13-12 and it was one of the biggest buzzes I’ve ever felt.

If you didn’t know, I’m 30 now. My friends have moved away, Nik has a wife and son and lives in London. Matt lives a quiet life near Edinburgh with his girlfriend. Neither are interested in videogames anymore, as both of them have really grown out of their gaming habit. It might surprise you young ‘uns, but videogames used to be perceived as something for kids, something to be grown out of in later years. People my age should be spending their weekends either looking after their kids, spending the afternoons in hardware stores and garden centres. If you’re like me, it’s still nursing a hangover and catching up on your backlog. I miss the carefree days of my younger years where I had things like weekends in which I didn’t work and seemingly endless Summer holidays. Online multiplayer is a great thing and the huge amount of hours I’ve put into Team Fortress 2 on the PC means I’m totally comfortable playing online with strangers online. But being able to turn around and punch your friend for griefing you, the casual banter and threats on each others lives, means I’d love to experience that type of thing again.